On the July 29 episode of MBC’s “The King of Mask Singer,” another round of contestants took on the challenge for the crown.

In the final round, Dongmakgol Girl was the last remaining contestant to go up against the reigning champion and 3-time winner, Bob Ross.

Attempting his fourth win, Bob Ross sang “A Thorn Tree,” originally by The Poet and the Village Headmaster. Dongmakgol Girl sang Park Jung Hyun’s “In a Dream” and moved the audience and panelists.

In the end, Dongmakgol Girl won the 82nd crown on “The King of Mask Singer” and said, “Thank you so, so much. I will repay this with good music.”

Bob Ross said after his loss, “I have no regrets because I have heard praise here that I will remember for a lifetime. Thank you very much.”

When he took off his mask, he revealed himself to be popular ballad singer Han Dong Geun, who jokingly said, “I know I’ve gained a lot of weight. I’ve been able to work here at MBC for the past six weeks thanks to all of you.”

He added, “Honestly, three wins is a lot. Thank you for your kind words. I’m grateful. They said that I’d lose weight if I became king but I gained 4 kilograms [approximately 9 pounds]. I put my all into each performance. I feel both relieved and regretful, but I’m also happy.” 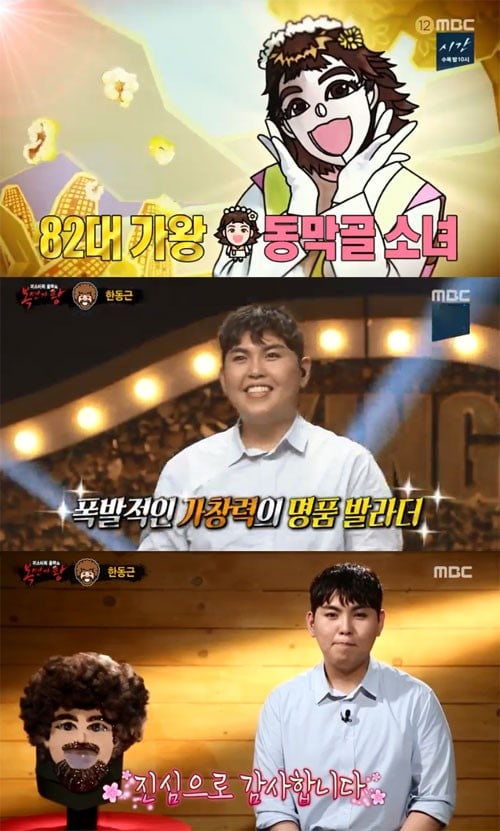 Watch the latest episode of “The King of Mask Singer” on Viki below:

Han Dong-geun
The King of Mask Singer
How does this article make you feel?