HaHa had everyone laughing on SBS’s “Running Man” when he gave some unexpected answers to questions about Kim Jong Kook.

The episode of “Running Man” that aired on July 29 featured a segment in which the staff would ask a random question about a member and another member would have to give three answers in five seconds. HaHa was paired up with Kim Jong Kook, and he grumbled, “Can’t I get someone more comfortable, I just want to live a comfortable life.” Kim Jong Kook laughed and said, “Is there really anyone else more comfortable to be around than me?” 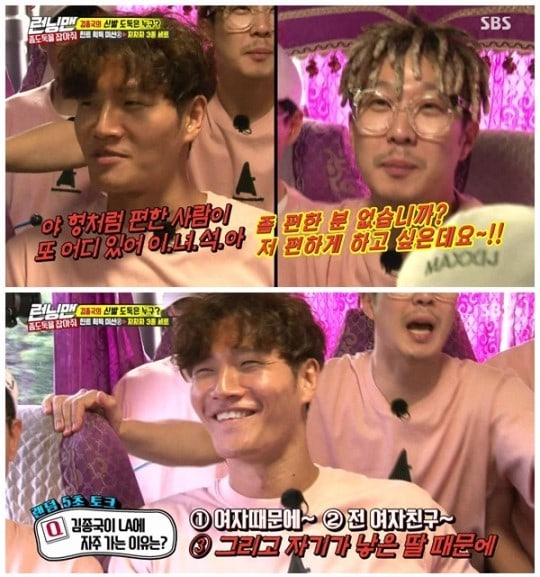 The second question was where things started to get a little interesting. HaHa was asked, “What are the reasons why Kim Jong Kook goes to Los Angeles so much.” He said, “Because of a woman, because of his ex girlfriend, and because of his daughter.” His last answer caught everyone off-guard, filling the vehicle with laughter. Yang Se Chan said, “It’s an exclusive scoop. I never knew you had a hidden daughter.” Kim Jong Kook added more fuel to the fire when he jokingly added, “My daughter got into the University of Southern California (USC) recently.”

The last question HaHa received was, “What is Kim Jong Kook most afraid of?” and HaHa responded with, “His daughter, his girlfriend, and his ex girlfriend.” Everyone laughed along and the moment was wrapped up with HaHa saying, “It’s just a joke,” to which Kim Jong Kook responded, “I like that kind of humor. I didn’t even know I was a dad.” He even wistfully added, “But the thought did cross my mind that it would be nice to have a daughter.”