On the July 30 broadcast of SBS funE’s “School Attack 2018,” NU’EST W infiltrated a school to treat the students to a surprise performance.

Before the big reveal, the members were each tasked with missions to complete inside the school, during which they had to remain undetected.

JR and Ren entered the school first, their mission being to find the signs on the stairs with NU’EST W’s lyrics and take a selfie, and also to place their own sign with handwritten lyrics on a blank step. Though JR passed by a faculty member and Ren had a near run-in with a student, both successfully carried out their missions.

Aron followed up with a mission to buy ice cream for the members and MCs at the school snack store, after which he had to tell the employee at the store that he was a big fan and ask for a selfie. 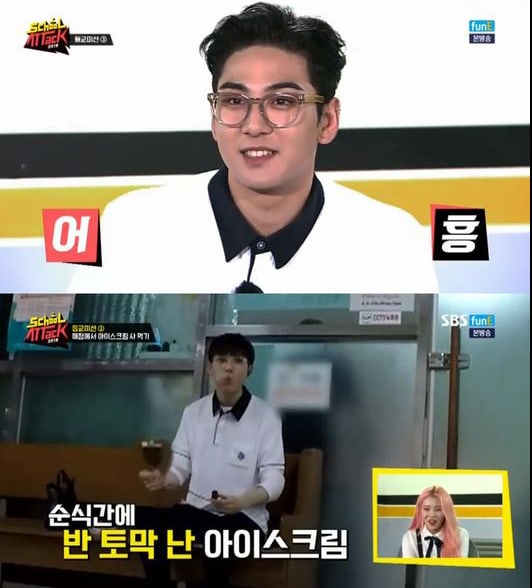 For the final mission, Baekho was pranked by the MCs, who intentionally gave hima mission located where the entire student body would be be passing by on their way to the auditorium. Despite having to walk against the flow of students to return to the staging area, Baekho managed to remain undetected.

With all members successfully completing their missions and all students gathered in the auditorium, NU’EST W made their grand entrance, performing their latest release, “Dejavu.” PRISTIN V also made a surprise appearance, performing “Get It.”

NU'EST W
PRISTIN V
School Attack 2018
How does this article make you feel?