On July 30, the actress took part in an interview after the drama came to an end. The romantic comedy began with viewership ratings of 5.8 percent and ended with its personal best record of 8.7 percent.

Hwang Bo Ra appeared in the drama as Bong Se Ra and struck up a love line with Secretary Yang (played by Kang Hong Seok).

She began, “At first, there wasn’t a love line. But around episodes four and five, there were scenes where we ran into each other. I thought, ‘Could it be…,’ and ‘Please,’ and a love line was created.”

The actress continued, “Since the Yang-Bong couple was loved and the love line developed, Secretary Yang later looked lovely and handsome. I’m bubbly, but he’s reserved, so I think it looked fun.”

On her chemistry with Kang Hong Seok in real life, Hwang Bo Ra said, “It was really good. He had many ideas and he’s the type who does things on the spot. He was ambitious. I think I acted comfortably in a way that fit him well. To describe it simply, he’s a really genuine person. I heard good things about him from people around me.”

The scene where Secretary Yang confessed his feelings for Bong Se Ra was a very popular scene. She commented, “It [was] a real burp. The director is subtle and doesn’t like exaggerated things. He was worried because I’m an actress, so he prepared cola without much carbonation. I didn’t burp and he said it was okay. But on the second try, I let out a monster burp. I rediscovered myself. I was so surprised and the staff burst out laughing. My face got really red as if it was on fire.” 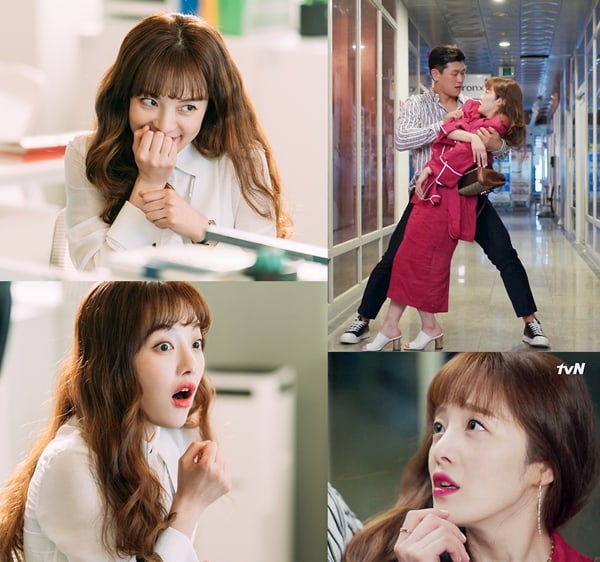 Bong Se Ra is a character that didn’t exist in the original webtoon. Hwang Bo Ra explained, “Everyone knew about their characters [through the webtoon], but I didn’t. The director asked me to trust him, so I trusted and followed him. Everyone worked hard, but I devoted everything and focused on each and every scene.”

She added, “I worried, ‘Won’t she be too much?’ but the original work is a webtoon and Lee Young Joon (Park Seo Joon) is also a character full of self-love. So, I thought of myself as the female Lee Young Joon. Also, my reactions were good so the director had set up a camera just for my reactions.”

When asked if she felt burdened about having to exaggerate her acting for her character, she replied, “It would be a lie to say I didn’t. I felt burdened about controlling the level [of exaggeration] in case it felt uncomfortable. I re-filmed a scene. I read comments and a staff member said that it was too exaggerated, so there is a part that I re-filmed. I controlled the level like this with the director because [the drama] couldn’t turn into a sitcom.”

Hwang Bo Ra discussed how reading the comments online helped her. She said, “I was so happy there weren’t any malicious comments. When I acted with exaggeration, my facial expression may have been overdone, but my lines were realistic. I controlled the balance in my own way to make it look realistic. That earned empathy from viewers.”

She continued, “Out of the comments, someone said that they wanted to see Bong Se Ra’s romantic comedy. I felt happy. There was also a comment that said they’d be happy if they had a co-worker like Bong Se Ra. When I also read a comment about how we achieved a certain percentage in viewership ratings, I gained more courage and felt more responsible.”

As for her relationship with her fellow cast members, Hwang Bo Ra revealed, “The atmosphere on set was really good. When our schedules were more free in the beginning, we always got together. At Park Min Young and Park Seo Joon’s urging, we went out for drinks and the atmosphere became better because of that. Our teamwork was good, so we could ad-lib well. It was to the point where all of the actors said that it was their first time experiencing this kind of atmosphere.”

Describing her feelings about the conclusion of the drama, she said, “It did well since the first episode, and thank you for loving it until the end. Now that it’s over, it feels bittersweet.”

Hwang Bo Ra debuted in 2003 through SBS’s 10th Open Actor Recruitment. Since then, she’s appeared in many dramas including “Arang and the Magistrate,” “Borg Mom,” and “Ms. Temper & Nam Jung Gi” as well as films “Chronicle of a Blood Merchant” and “Ordinary People.”

Check out the first episode of “What’s Wrong with Secretary Kim” below!