Block B Member Zico and IU’s “SoulMate” is taking over the charts!

On July 30 at 6 p.m. KST, Zico released his new song “SoulMate” featuring IU. The song also includes Crush in the chorus and Melomance’s Jung Dong Hwan on piano, with Zico having co-composed and written the lyrics for the track.

As of July 31 at 2:30 p.m. KST, “SoulMate” took No. 1 on the realtime and daily charts of all six major music sites: Melon, Genie, Bugs, Mnet, Naver, and Soribada, as well as iChart’s realtime chart. This means it has achieved what’s known as a “certified all-kill.” 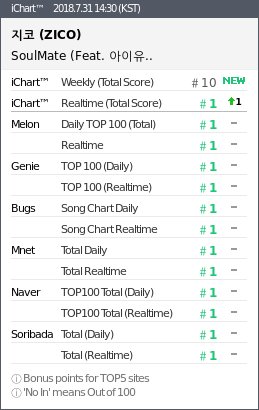 For the song to achieve a “perfect all-kill,” it will also need to take No. 1 on iChart’s weekly chart.

Congratulations to Zico and IU!

Block B
IU
Zico
How does this article make you feel?