HaHa Opens Up About His Childhood And Marriage

HaHa and Skull made an appearance on the July 31 episode of JTBC’s “Talk To You 2.”

During the episode, HaHa shared his thoughts about appearing on the show, saying, “I watched the monitor in the waiting room, and I felt like I came to church after being out all night on Saturday. You guys are the best.”

Concerning the topic of “fool” that day, HaHa said, “These days, saying someone is a fool can be interpreted as a good thing. There are fools who only know one thing and fools who insist on doing what they want without minding others.”

Girls’ Generation’s Yuri labeled HaHa as a “fool for his son and wife,” and he replied, “I don’t know if I’m a fool for my wife, but I’m definitely a fool for my son.” Then he added, “I feel uncomfortable for being portrayed as a romanticist on social media nowadays. I’m not like Sean, Cha In Pyo, or Choi Soo Jong. I’m realistic. I’m trying to be like Lee Bong Won. Of course, I love my wife to death. I can even die for her, but I’m not a great husband.” 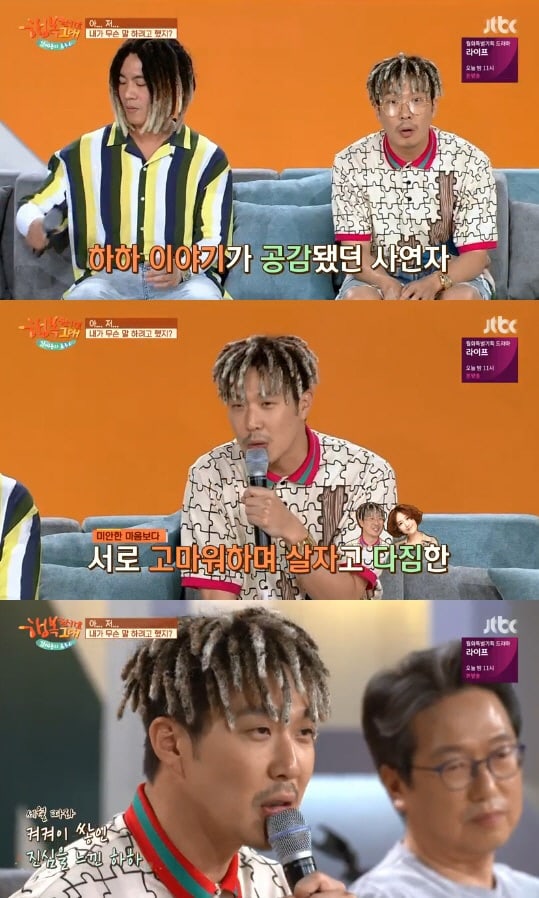 HaHa also shared his thoughts about a quarreling elderly couple on the show, saying, “I feel strangely touched. Before getting married, my wife and I said we should live with gratitude rather than say sorry. However, sorry is the word we say the most these days.”

Another audience member from the show was a mother who was worried about her slowly developing child and her bullied child. HaHa commented, “I couldn’t speak at all until I was six years old. According to my mom’s diary, I didn’t ask for food even though I was hungry. I couldn’t even order black bean noodles until I was ten years old. But now, I [talk to the point] where people beg me to stop talking. You never know what will happen. I want to tell you to not worry so much.”

HaHa
Kim Jae Dong's Talk to You 2
How does this article make you feel?