Just two episodes into its run, tvN’s new drama “Familiar Wife” has already managed to catch viewers off guard with a shocking twist!

The second episode of the drama, which aired on August 2, took first place in its time slot across all channels while enjoying an increase in viewership ratings from the premiere the night before. According to Nielsen Korea, the broadcast scored average ratings of 5.5 percent and a peak of 7.0 percent—impressive viewership ratings for the second episode of a drama airing on cable.

On the latest episode of “Familiar Wife,” the unlucky Cha Joo Hyuk (played by Ji Sung) ended up in a bitter fight with his exhausted wife Seo Woo Jin (played by Han Ji Min). Due to their financial circumstances, the couple was depending on a potential promotion that Joo Hyuk was up for at work. However, his thoughtless behavior cost him the promotion, causing Woo Jin to lash out at him in fury, and Joo Hyuk ultimately left the house in a rage. 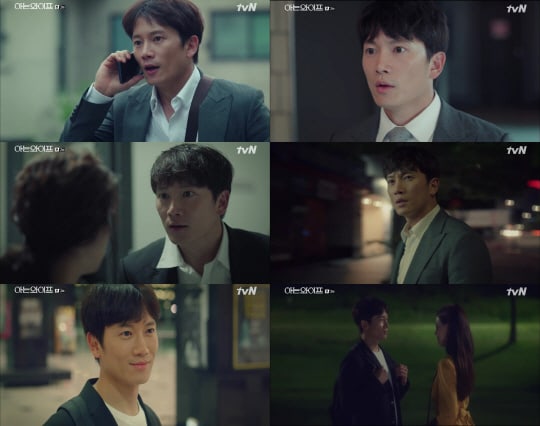 After discovering that he had been able to change his present timeline by traveling to the past and doing things differently, Joo Hyuk returned to 2006 once again to relive the fateful day on which he met his wife. This time, when he encountered his wife for the first time on the bus, he chose to ignore her in favor of going to meet his first love Hye Won (played by Kang Han Na) instead.

When Joo Hyuk woke up the next day, he found himself back in present day—but with a different wife by his side. Instead of Woo Jin, Joo Hyuk was now married to Hye Won; his decision to change his behavior in 2006 had completely altered the course of his life. Meanwhile, Woo Jin appeared to be living a happier, brighter life without Joo Hyuk as her husband, leaving viewers to wonder what kind of path she had taken in this new timeline.

To find out what lies in store for the now separated couple, don’t miss the next episode of “Familiar Wife” on August 8 at 9:30 p.m. KST!

If you haven’t already started watching the drama, check out the first episode below: