Recently, it was revealed that celebrity A, who debuted as a girl group member, and the residents of a neighborhood in Seoul are in conflict. 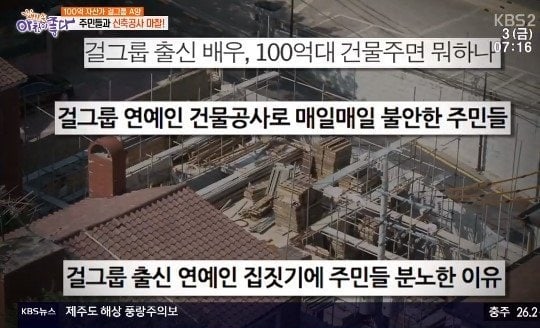 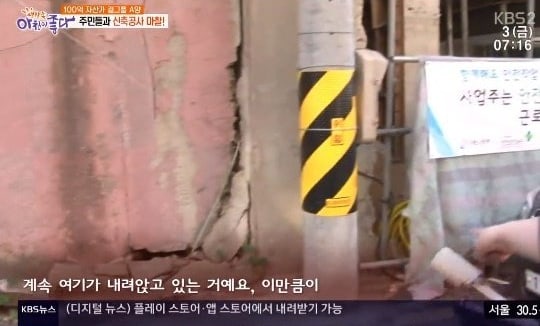 When entering the residents homes, the situation was far worse. The building had started to tilt and crack, and there was a problem in their piping system, resulting in water leaks and mold covering various parts of the house. One resident stated, “We can’t leave the house when it rains. Water leaks continuously and the big pots [used to catch the rain] fill up quickly.” 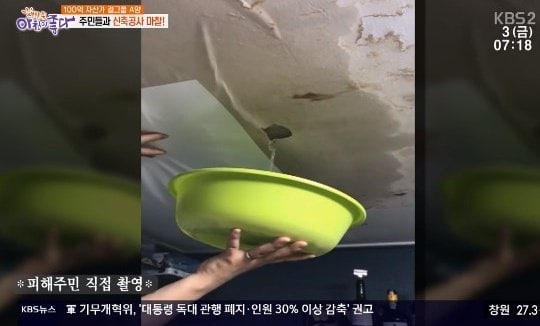 After getting in touch with “Good Morning Live,” celebrity A’s mother stated through a telephone call, “I don’t know who the home owners are, but I don’t think we need to talk about it.” Celebrity A’s agency was also contacted, but a staff stated, “We’re just workers so we don’t know much about it.”

Although there was reports that celebrity A’s mother claimed the construction was done using a vibrationless method of construction, the residents denied this and replied, “During construction, we felt a ton of vibration. We couldn’t watch the TV or even make calls.” When “Good Morning Live” consulted with a specialist about this case, they stated that although they couldn’t confirm anything through just photos, it seemed like the ground had been dug into using hydraulic shovels.

After this became a problem, the residents and celebrity A drew up an agreement based on the results of some inquiries sent to a safety inspection business. The safety inspection business replied, “Despite the residents’ worn out building, the construction nearby caused great problems. The water leakage problem was particularly great, so we asked them to fix the piping first, rather than continue on with the construction of the building.” The business further explained that the monetary compensation resulted to 300 million won (approximately $266,000).

However, the residents have not been able to contact celebrity A’s agency, even after staff from “Good Morning Life” tried to call the agency with them. In regards to this, the residents commented, “We’re not saying not to [construct the building]. We’re saying to properly compensate the neighbors first so it doesn’t cause troubles for them. We didn’t draw up the agreement like that.”