In an interview with Oh My News on August 1, Park Min Young talked about her most recent drama “What’s Wrong With Secretary Kim?” which recently came to a conclusion after a popular run.

Her character in the drama was a memorable one for Park Min Young, who said, “It feels like we’re still doing the drama. I miss it to the point that I want to go back. Kim Mi So is my favorite among the characters I’ve played until now.”

She added, “I liked everything [about my character. She didn’t try to stand out, but just did her job to the best of her ability. She was charismatic, and her determination to make her own way in life was admirable. Seeing how she takes care of herself and bravely faces any situation that comes her way, I knew that this character would be special.”

The consistency of the character was also something that made Mi So such a memorable character for Park Min Young. She said, “I liked that she didn’t become this dopey character after falling in love. She stayed grounded and said ‘no’ when she needed to and gave advice when she needed to.” 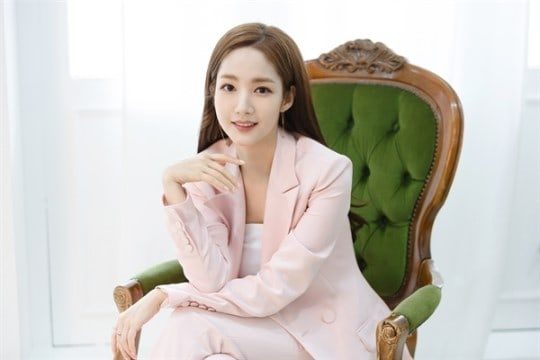 On how it was working Park Seo Joon, the actress said everything was great. “Park Seo Joon has so many strengths as an actor. He’s fast on his feet, and there are a lot of actors who don’t really know how to use their bodies, but Park Seo Joon is naturally very good at acting with his whole body.” Specifically with rom-coms, Park Min Young said, “I don’t know if it’s because he’s done a lot of rom-coms, but he really knows which parts of the drama will make people fall in love. Even with really cringeworthy lines, he’ll deliver them in such a sweet way that it makes the character sweet and cute.”

When asked if she’s ever experienced a slump in her career, Park Min Young said she has, twice: once before “Sungkyunkwan Scandal” and once before “Healer.” “There were times when my self-esteem as an actor had fallen, but ultimately, looking back, there was always a great drama that came to me like a gift. Now, I’m not as affected by [slumps]. No matter what happens, I think, ’this is going to pass.’”

If you haven’t already, watch “What’s Wrong With Secretary Kim?” below!