Apink’s Hayoung is one lucky SONE!

The variety show is follows two female celebrities, one older and one younger, as they bond, share their daily lives, and confide in each other while staying at an apartment together.

While on the way to meet Hyoyeon, Hayoung talked her manager’s ear off as she explained how much she adores Girls’ Generation. Revealing just what a big influence the girl group is in her life, Hayoung shared, “They’re one of the reasons I dreamed of becoming a singer.”

“They probably debuted when I was in fifth grade,” she continued. “I went to go see a Girls’ Generation’s concert with my members before our first concert as Apink. Watching them helped us a lot.” The idol also praised how much energy Hyoyeon has when she performs.

Unable to hide her excitement, Hayoung then called one of the show’s producers to ask if she could meet Hyoyeon somewhere else. With their approval, Hayoung decided to surprise the Girls’ Generation member in a car, rather than at the apartment.

Hayoung successfully startled Hyoyeon, and the two idols set off with Hyoyeon at the wheel. On the way to the apartment, Hayoung began to ask things she had always been curious about as a fan, from cover videos to title tracks to music videos to dieting.

The Apink member explained to the producers later, “I keep saying this, but my members and I always set Girls’ Generation as our standard. We always said things like, ‘If it’s like this for us, what was it like for them?’ That’s why I was so curious.” 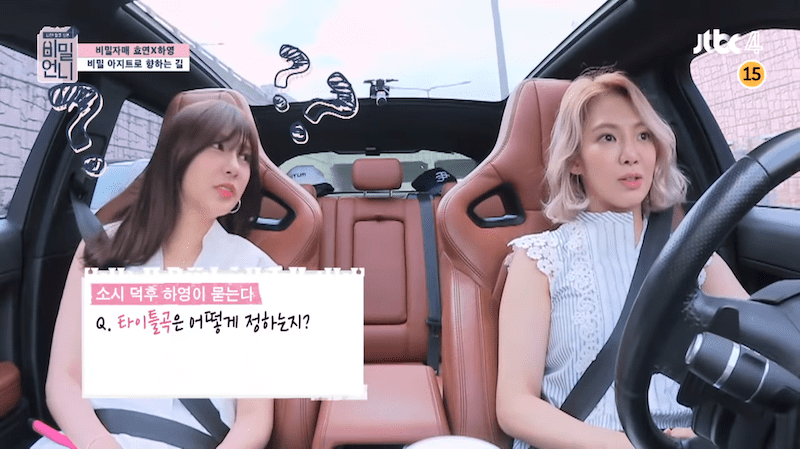 Not all of Hayoung’s questions were lighthearted, as she also asked at one point, “You know how there are lots of rumors that come up. What do you do during those times when other people ask you about them, but it’s not true?”

Hyoyeon commented, “It’s hilarious when I hear things that are strange. There really is a lot. That’s why we joke about it, saying things like, “I heard this rumor is going around. Act well when you’re outside.'”

The Girls’ Generation’s member also shared what she thinks is a reason for their great teamwork. “We talk a lot amongst ourselves,” Hyoyeon explained. “Even if we live together, we really talk a lot even when we’re at broadcasting stations. So, we can naturally just talk about ourselves, without needing to say things about how it’s a secret and whatnot.”

What questions would you ask Hayoung or Hyoyeon if you ever met them?