Red Velvet talked about what it was like to perform in North Korea on JTBC’s “Ask Us Anything.”

On August 4, Red Velvet appeared on a variety show for the first time as a whole group after their performance in Pyongyang, North Korea. The girl group joined the lineup of Cho Yong Pil, Lee Sun Hee, Yoon Do Hyun, and more for a concert in Pyongyang from March 31 to April 3.

Kang Ho Dong stated, “Red Velvet is ranked No. 1 in girl group hot issues for the first half of this year. Your performance in Pyongyang was a hot topic.”

Red Velvet’s Joy was unable to join her members for the Pyongyang performance due to her schedule for a drama. She commented, “Out of sadness, I talked with the staff in a North Korean dialect.”

On their performance of “Red Flavor” and “Bad Boy” at Pyongyang, Seulgi said, “We originally had a dance move of shooting guns., but it was awkward to do it at the Pyongyang Arena. We changed it to a cute choreography, but I was so nervous that I forgot and accidentally pretended to shoot a small gun.” She continued, “I thought that I made a mistake and was really scared, but there were no problems and it turned out to be fine.” 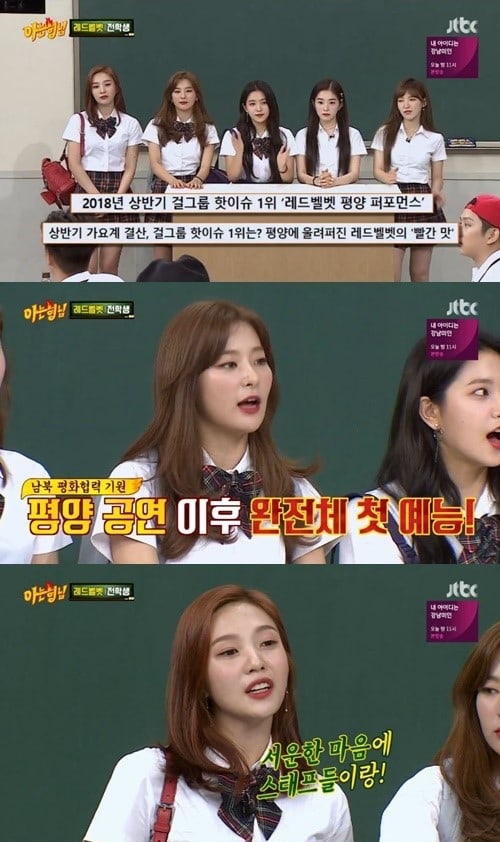 She explained, “They called all of us ma’am and called Irene the leading ma’am. They had researched us beforehand. They greeted me by saying, ‘Aren’t you Miss. Kang?’ and said, ‘Aren’t you Red Velvet’s leading ma’am?’ to Irene.”

Seulgi added, “At first, I thought they said ‘principal,’ but after listening carefully, I realized they were saying ‘leader.’ They even knew about our birthplaces.”

Red Velvet
Ask Us Anything
How does this article make you feel?