During the August 5 broadcast of the variety show, the cast competed for the right to change the profiles and photos of the members on a popular Korean portal site.

The eight members first split up into pairs of two to compete against one another, with each pair recruiting a celebrity guest and then attempting to fulfill their hidden mission before their opponent.

Song Ji Hyo and HaHa, who recruited MAMAMOO, ended up in a vicious battle, with Song Ji Hyo blocking HaHa at every turn. HaHa’s hidden mission was to get a bite to eat from everyone, and Song Ji Hyo quickly caught on. Whenever a MAMAMOO member tried to feed HaHa, she quickly intercepted and stole the bite for herself.

Yang Se Chan and Kim Jong Kook recruited Jang Do Yeon as their guest. Yang Se Chan, whose mission was to change shoes with the guest, handed the comedienne his tennis shoes and suggested, “Change your shoes to something comfortable.” Realizing what Yang Se Chan’s secret mission was, Kim Jong Kook kicked his shoe out of the camera’s frame. Despite Kim Jong Kook’s attempts to stop him, Yang Se Chan’s persistence paid off, and he was able to complete his mission first. 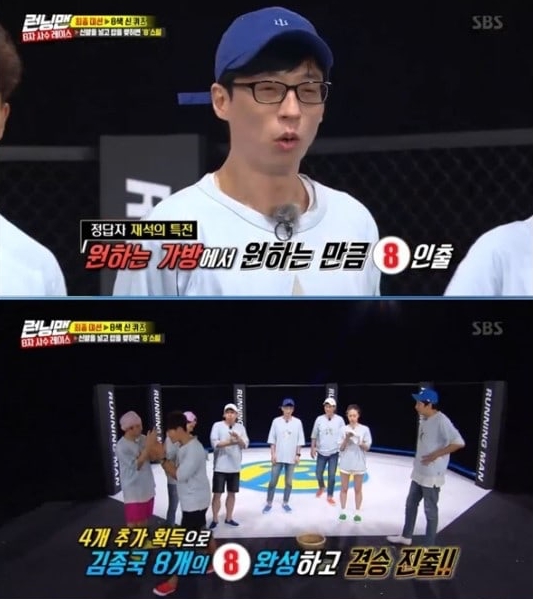 Lee Kwang Soo hilariously failed at his mission after trusting Sung Dong Il‘s promise that he would lose to him on purpose. Instead, Sung Dong Il, who was teamed up with Jun So Min against Lee Kwang Soo, worked hard to win and made the actress the winner.

The winners of the missions— Yoo Jae Suk, HaHa, Jun So Min, and Kim Jong Kook— each earned an “8” badge. They then competed against one another in a quiz battle where the winner of each round could take as many “8” badges from another person as desired, and the first three people to gather eight “8” badges would advance to the final round.

After correctly answering the first question and being given the chance to take away someone’s “8” badges, Yoo Jae Suk announced, “I’ll exempt people who honestly tell me how many [badges] they have.” When Lee Kwang Soo replied, “Zero,” Yoo Jae Suk didn’t believe him, although Lee Kwang Soo really had zero badges. 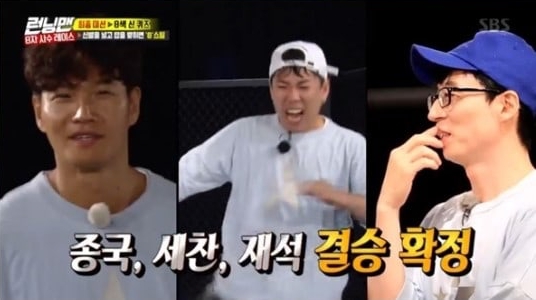 In the end, the three finalists to play the “Bomb Quiz of Fate” were Yoo Jae Suk, Kim Jong Kook, and Yang Se Chan. They each answered a multiple choice question by cutting one of the four wires attached to a “bomb,” and if they cut the incorrect wire, they were eliminated. Kim Jong Kook was ultimately crowned as the winner and won the right to change the online profiles of the other members.

Due to the verification process involved in changing a celebrity’s profile on portal sites, although the changes to the cast members’ profiles have been submitted, they have not yet been updated online. For now, the hilarious profiles can only be seen on the “Running Man” website.

Check out a recent episode of “Running Man” below!