Ailee opened up about her struggles with her weight and how she overcame them during a recent appearance on JTBC’s “Hidden Singer 5” on August 5.

The “Hidden Singer” series pits a singer against five of their voice impressionists. An audience of celebrity guests and regular citizens are tasked with finding out which numbered booth the real singer is behind, while trying to eliminate the impressionists through rounds of voting.

When it came time to introduce each of the voice impressionists, one contestant’s nickname caught people’s eye. Calling herself “Ailee who lost 15 kilograms,” contestant Kang Go Eun explained, “I was on the heavier side growing up and I felt the pressure of needing to lose weight in order to pursue a career as a singer. That’s when I saw an article about Ailee’s weight loss. They said she ate 500 calories a day and exercised all day while also practicing her choreography. I tried copying her routine and I really felt like I was going to die. I couldn’t sing as well as I used to.”

Hearing this, Ailee revealed, “When that article came out, I was around 49 or 50 kilograms.” She tried to open up as she said, “I wouldn’t eat anything and just kept going,” but had to stop when her emotions overtook her as she remembered her struggles and she began to cry. 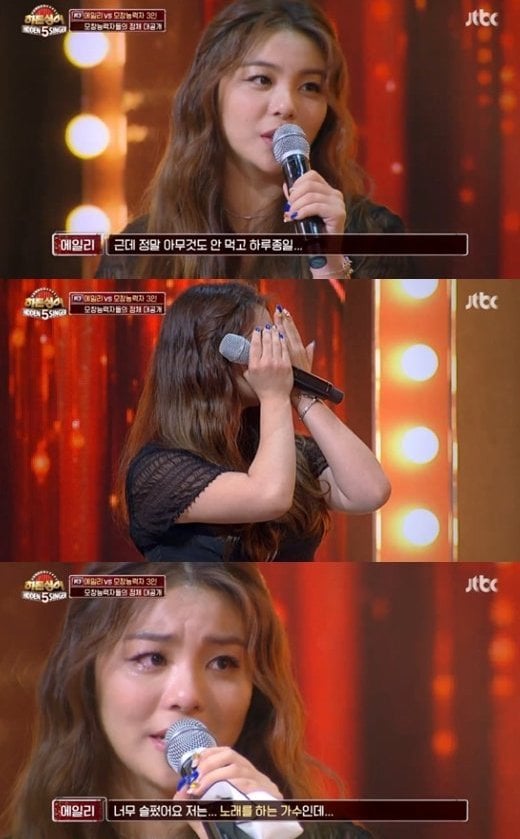 After taking a moment, Ailee continued on to say, “I was so sad. I was supposed to be a singer who just sings, but it [losing weight] was something I had no choice but to do if I wanted to stand on stage, and that made me so sad.” She added, “I was upset because I knew that the diet and weight loss had affected my singing, and I felt a sense of shame because I felt like I wasn’t showing my 100 percent when I was singing on stage at that weight. I may have been nice to look at when I weighed 49 to 50 kilograms, but I think I was feeling at my lowest back then.”

Ailee then smiled and revealed that she had learned to overcome those struggles, saying, “I’ve decided not to care about my weight anymore.” She emphasized, “I’m so happy where I’m at now and I’m satisfied with my singing, and I think that’s much more important.”

Ailee
Hidden Singer 5
How does this article make you feel?