Wanna One and their fans Wannable are celebrating the group’s first anniversary together!

The project group made their debut on August 7 of 2017 after the 11 members were chosen through viewer votes during the Mnet survival show “Produce 101 Season 2.” They’ve become an international sensation, and so far have released two mini albums, a repackaged album, and a special album, with their most recent comeback being in June with “Light.”

On August 7 of this year at midnight KST, their official Twitter shared a picture of the group with a message for fans.

They wrote, “Wanna One 1st Anniversary. A year in which everything was special and happy because we were together with Wannable, stay together with us in the future too with unchanging feelings! Thank you and we love you, Wannable.”

Shortly after midnight, “Happy_Wannaone_day” began to trend worldwide on Twitter as fans showed their love for the group. 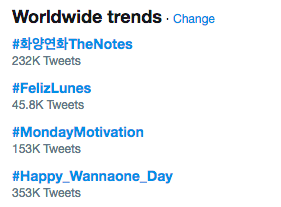 Check out some of the tweets below!

no such thing as first and last anniversary as long as OT11 is forever in our hearts ? Let’s continue walking on golden path together and make beautiful memories ?#Happy_Wannaone_Day pic.twitter.com/xn7hTTIzMR

Look at how active busy they are promoting as a group within a year.
? Wannables are so proud of WANNA ONE ??#Happy_Wannaone_Day pic.twitter.com/zLqRdQDCrI

happy anniversary to the ones who manage to make my life a little bit brighter every day. you are one of the best things to ever happen to me and i'd be completely lost without you. thank you for being wanna one and for making this year worth it. i love you ? #Happy_WannaOne_Day pic.twitter.com/RiaEh3KS8y

Happy anniversary to Wanna One!