Cha Bong Hee (Son Jong Hak), the branch manager of the bank who always maintains a high-tension personality, is the master of dad jokes. His employees master their own reactions to play along with him. He is a rather adorable man who once got mad when everyone else drank iced coffee without him, but quickly forgave them when Cha Joo Hyuk (Ji Sung) gave up his iced coffee for him.

Contrary to the easy-going Cha Bong Hee, team leader Byun Sang Woo (Park Won Sang) is all about making progress and watches his subordinates like a hawk. He also has the charm of showing slapstick comedy when he is in gratitude. Team leader Jang Man Ok (Kim Soo Jin), who once used her smiling face to take earrings from her subordinate, portrays the nasty side of bosses and allows viewers to empathize with the subordinates. 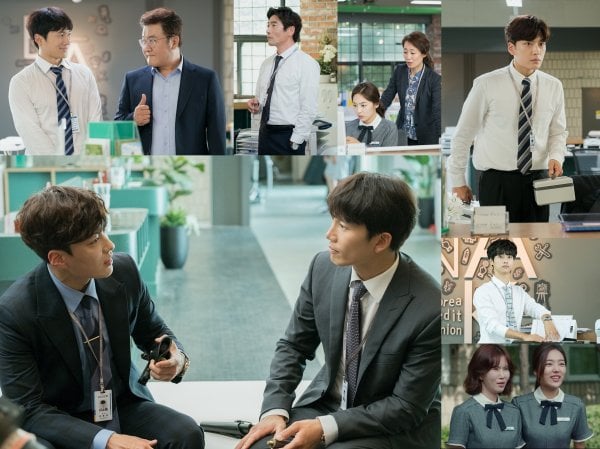 VIXX’s N plays the shameless and stubborn newbie Kim Hwan who always causes messes and never apologizes for them. He’s always so bold and brave because he’s from a wealthy family. Joo Hyang Sook (Kim So Ra) and Choi Hye Jung (Gong Min Jung) are tactful around their superiors, yet use their sly charms to ask Cha Joo Hyuk to buy them coffee, making him use up his weekly allowance.

Cha Joo Hyuk’s one and only light in his hectic work life is his powerful supporter Yoon Jong Hoo (Jang Seung Jo). In the first episode, Yoon Jong Hoo secretly places a box on his desk and even shows all kinds of bad acting in front of the audit team to prevent him from being late. When Cha Joo Hyuk is depressed, Yoon Jong Hoo jokes around to lift up his mood, and he always listens to Cha Joo Hyuk vent about his life after work.

With realistic characters many can easily find in their own lives, the office life is another key point in “Familiar Wife.”