It’s a tale as old as time: rich, handsome, and selfish guy falls in love with a poor, plain yet empowered girl with a heart of gold. “Meteor Garden,” which swept the whole of Asia, captures the ups and downs of this me-against-the-world kind of love so well that it now has a 2018 version. The lead character, Dao Ming Si (or Ah Si), is the quintessential rich heir whose cold and tough walls are broken down by a unique girl (Shen Yue) who has the guts to stand up to him.

And now a new face is on the spotlight as he takes the lead as the new Dao Ming Si — Dylan Wang. Old and new generation of “Meteor Garden” fans are swooning over this hottie, and here are some moments that show why:

Whenever he rocks a hairstyle

Dylan had the tough task to wear the iconic “pineapple hair,” and just by the looks of it, he’s carrying it pretty well. Throughout the series, they show variations of his hairstyle that all look good, whether it’s upswept, pulled down, or even messily unkempt. Outside of the series, he also does some modeling and he can do mischievous, mysterious, or cute concepts effortlessly.

When he does that intense glare

True to Dao Ming Si’s character that’s always tough, arrogant, and sometimes too aggressive, Dylan portrays this character with cold, angry glares that are meant to intimidate people. While this new version is a bit watered down and has less violence that the previous one, it still shows some intense scenes that is integral to the change of his character from a selfish brat to a selfless, warmhearted guy. 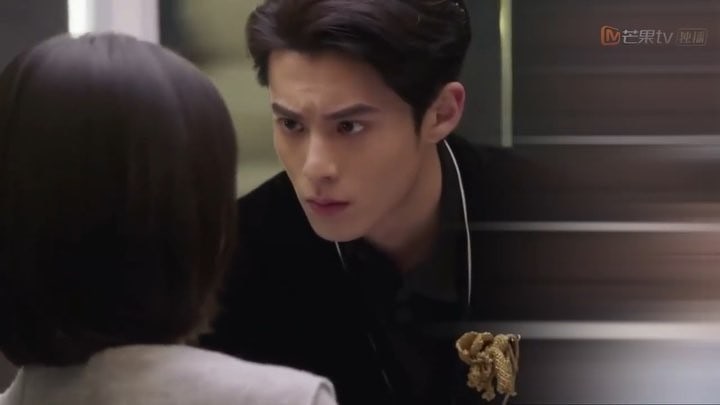 When he acts tough but is really childish…

Sure, he’s always throwing fits of anger and always ordering people around, but deep inside he’s just a little kid who wants attention and doesn’t know anything about love. On and off screen, this can also be seen with Dylan as he seems to be a naturally playful and happy-go-lucky guy. 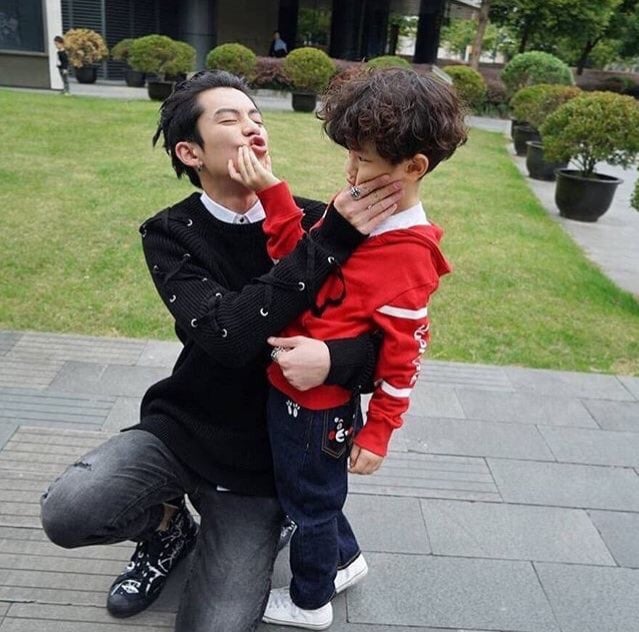 In this scene, the tough-talking Dao Ming Si gets a lesson from his older sister who disciplines him by beating him up, reminiscent of Shan Cai’s brazen high kick move.

In between takes and interviews, Dylan knows how to work the camera and knows how to switch from charismatic to cute mode.

When he acts cocky or shy (when really, he is just clueless about love)

Dao Ming Si is always in his own world and doesn’t really know how love works in the real world. He devises pranks to provoke Shancai, annoys her to no end, and makes things difficult for her, not knowing that this is his own way of wanting to get her attention and affection. 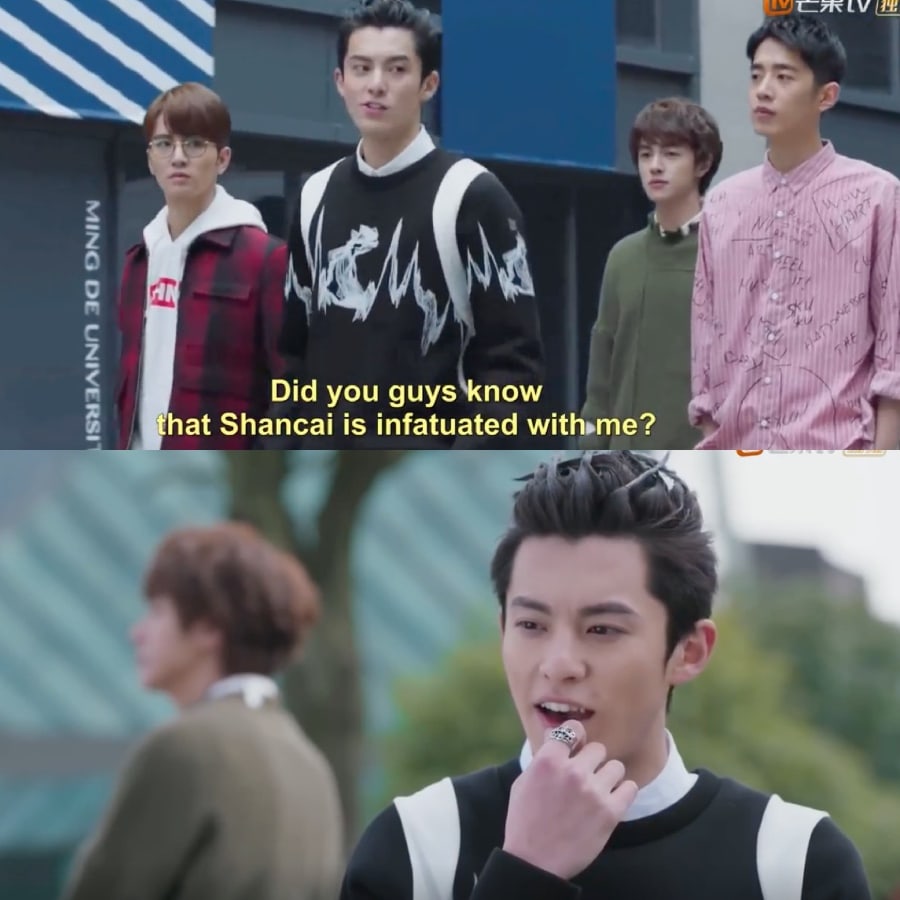 He acts cocky, but when confronted with embarrassing situations he turns into a blushing, shy guy, just like this scene when Shancai’s mom catches them arguing inside the bathroom half-naked (with Ah Si accidentally running into Shancai).

His arrogant exterior is replaced with an excited guy who secretly does a victory dance in his room.

He turns into a mushy, affectionate guy when he secretly steals glances at the love of his life.

Get a guy who looks at you the way Dylan does as Ah Si, who’s head over heels for Shancai. 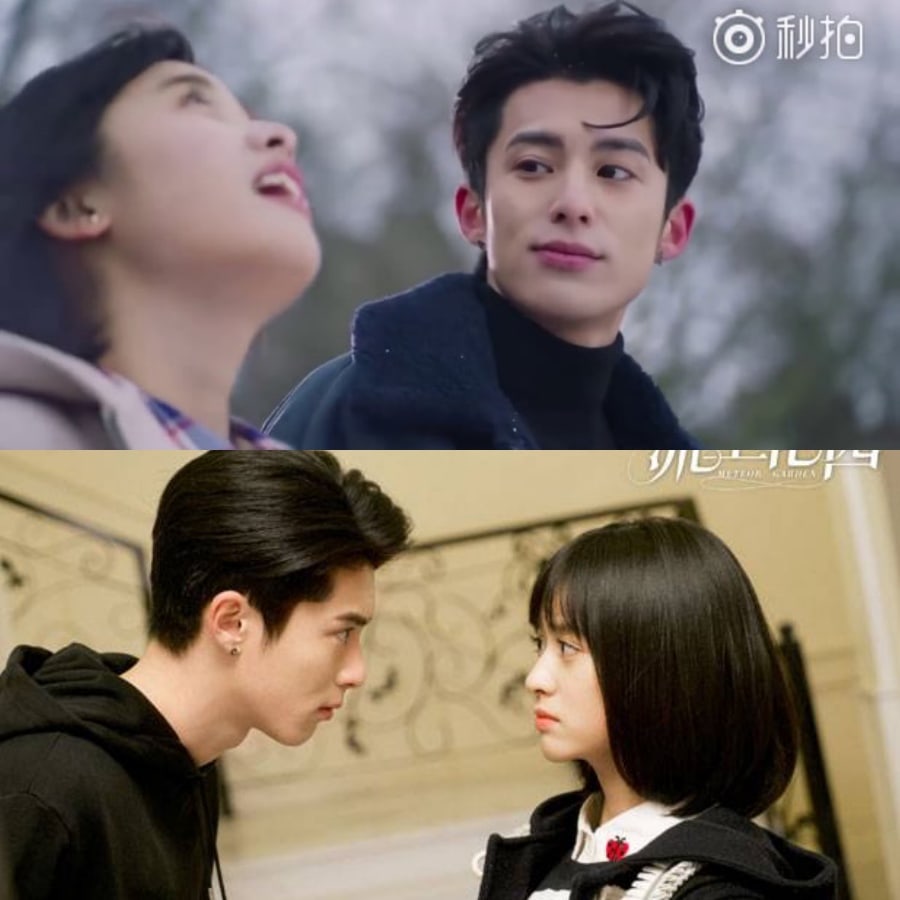 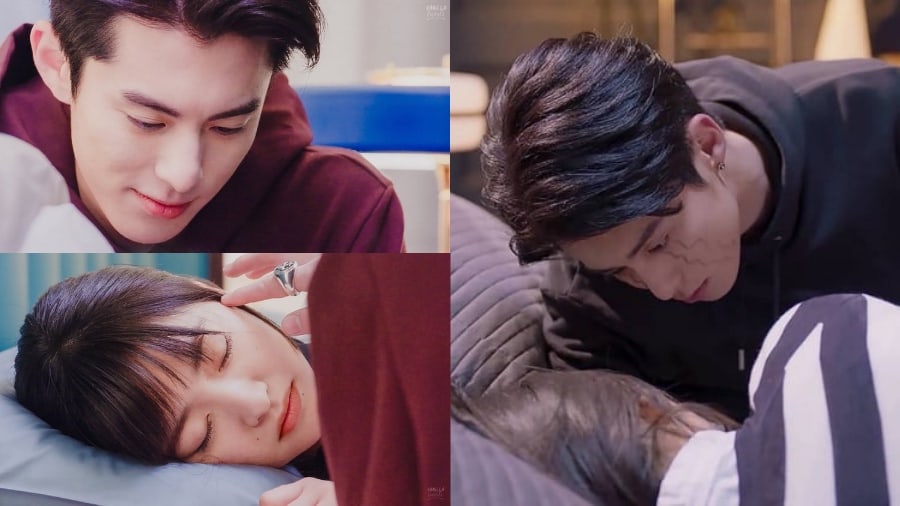 When he acts jealous…

Central to this story is the part when Shancai is caught in a love triangle between the loud, conceited Ah Si and a calmer, mild-mannered Hua Ze Lei (Darren Chen). Ah Si gets so jealous that he kicks Lei out of F4. 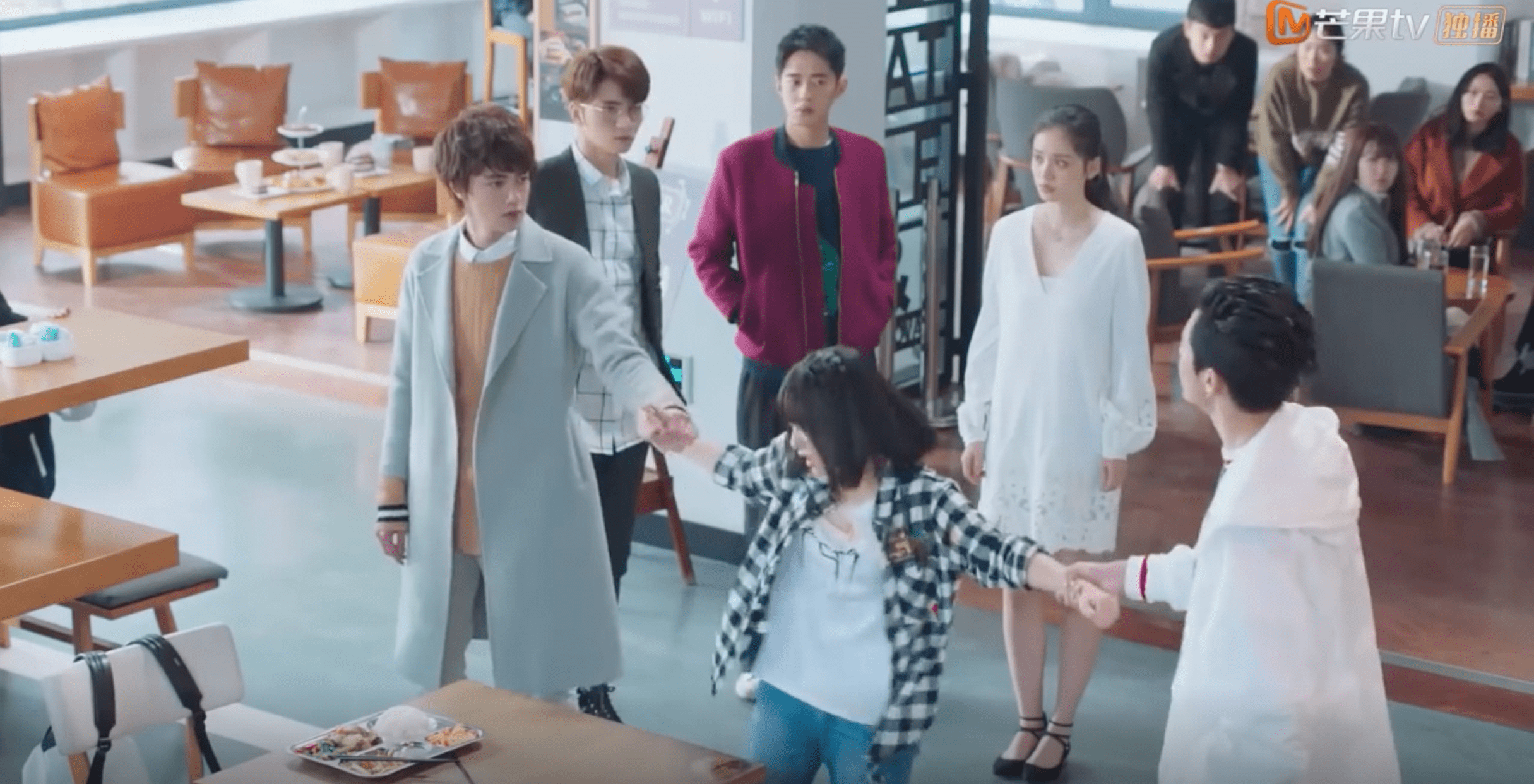 And when things are better between him and Shancai, he still has this mischievous side to him where he’s always proud to claim her as his girl. Old wounds die hard, so he makes sure that Lei overhears his declaration of their relationship status.

When he makes every excuse to get closer…

Ah Si’s heart knows what it wants and he isn’t afraid to show it no matter how close. 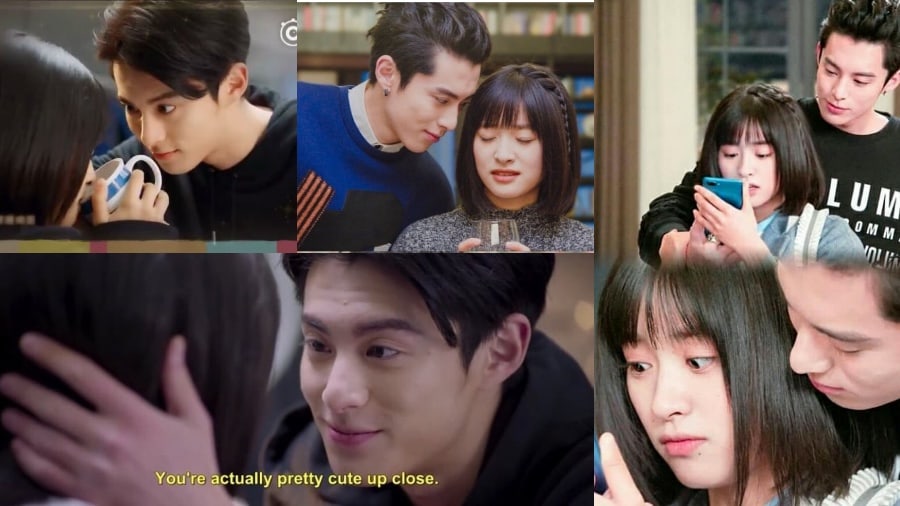 When he saves the day…

Ah Si’s love for Shancai runs deep and he’s always willing to risk his life to save her from troubles.

When he acts cute and makes faces…

From goofy, cutesy, to foolish, Dylan is a walking gif and meme treasure trove that will make you want to screen-capture every scene.

When he’s a supportive and protective bf…

Ah Si always looks out for Shancai through little gestures that show his concern.

Ah Si believes that Shancai can do anything and in this scene, he is practically a die-hard fanboy cheering hard for her when she enters a culinary competition.

When he gives kisses…

Viewers are taken into a roller coaster ride with his mood swings in “Meteor Garden,” but one thing’s for sure. He can melt hearts with his sweet and intense kisses that make their love story even more exciting to watch! 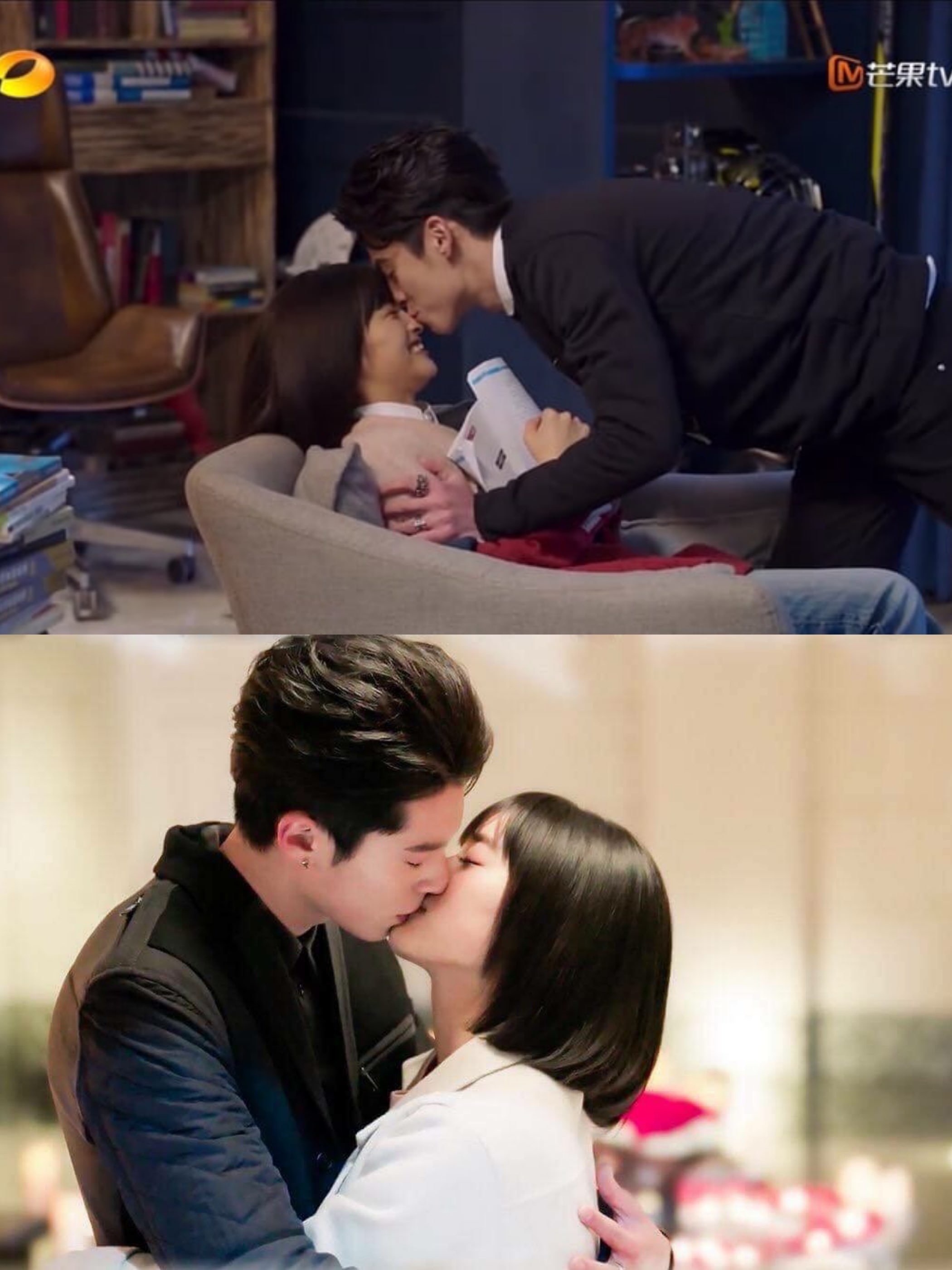 Hey Soompiers! What do you think about Dylan Wang as Dao Ming Si so far? Let us know in the comments below!

Soompi Spotlight
Meteor Garden 2018
Dylan Wang
How does this article make you feel?