BLACKPINK And Fans Share Their Love On 2nd Debut Anniversary

BLACKPINK and their fans BLINK are celebrating their second birthday!

The four-member girl group from YG Entertainment made their debut on August 8 of 2016 with the songs “BOOMBAYAH” and “Whistle,” and went on to become one of K-pop’s biggest girl groups. Their latest track “DDU-DU DDU-DU” has broken many records, including achieving the highest ranking yet for a song by a Korean girl group on Billboard’s Hot 100.

On August 8 of this year, BLACKPINK’s official Twitter shared two posters to celebrate their anniversary.

Jisoo wrote on her Instagram, “To my beloved BLINK and my beloved BLACKPINK members, I’ll continue to love you and remain the same as the first day we met. I love you. No matter when, where, or what is done.”

Soon after midnight, fans began to trend the hashtag “BLACK2THEPINK” worldwide to celebrate, show their love and support, and look back on their amazing history together! 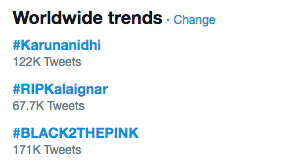 Check out some of the tweets below!

every era is precious and beautiful to us! thank you so much for debuting @ygofficialblink #BLACK2thePINK pic.twitter.com/zYNvvxhsgD

happy 2nd anniversary to my girls! ? YOU GUYS DID AN AMAZING JOB THIS YEAR! i love you all sosososoom uch!! #black2thepink pic.twitter.com/2n49tdZniO

Despite the uncertainty of debuting, our 4 girls, Jisoo, Jennie, Rosé and Lisa never gave up and debuted as BLACKPINK.
They’ve made it so far, releasing hits after hits, smashing records, becoming global stars, having their own concert, etc.

let’s bring it back to where it all started. one single video was all it took for blackpink to tell the world that THEY’RE COMING. the kpop industry knew they were about to change it up.#BLACK2THEPINK pic.twitter.com/moN02uTni0

We’ll shine together
whenever,
wherever,
forever ever ever .#BLACK2thePINK pic.twitter.com/OxLFXhPVMT