BLACKPINK and TWICE dominated the digital charts this month, while SEVENTEEN topped the physical album chart with their latest release.

BLACKPINK’s “DDU-DU DDU-DU” took No. 1 on both the overall digital chart and the streaming chart for July, followed by TWICE’s “Dance the Night Away” at No. 2. Shaun’s “Way Back Home” charted at No. 3 on the digital chart and No. 4 on the streaming chart, while Apink’s “I’m So Sick” came in at No. 4 and No. 5 on the two charts. Bolbbalgan4’s “Travel” stayed strong at No. 5 and No. 3 on the charts respectively. 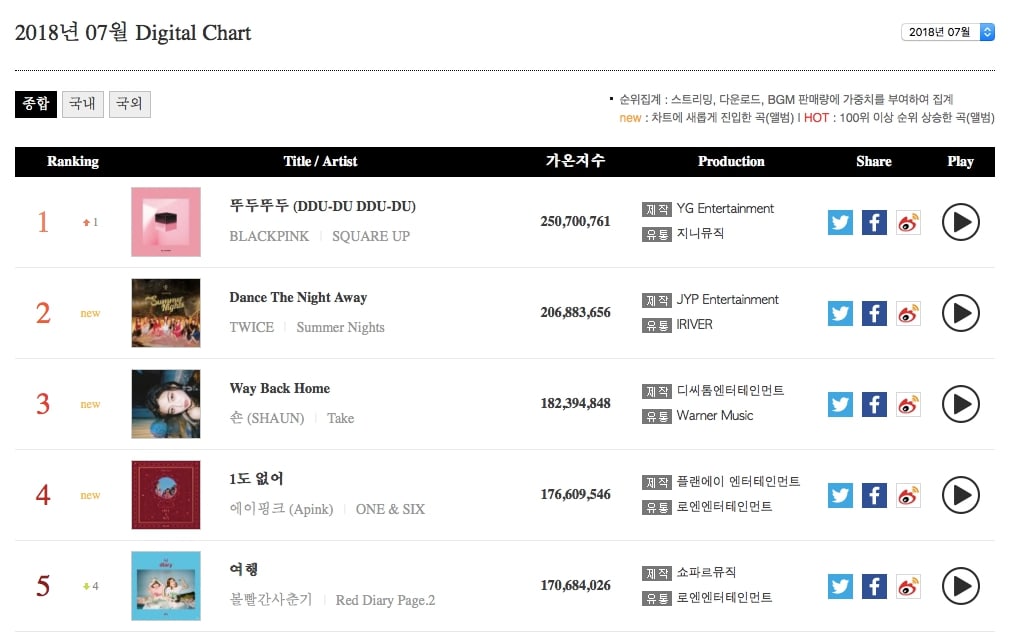 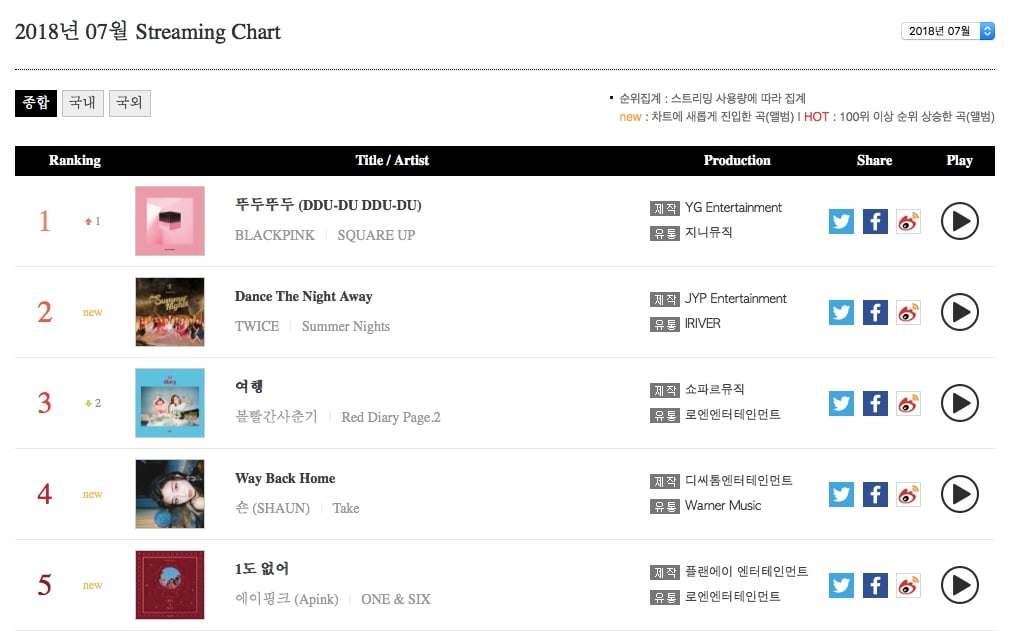 TWICE topped this month’s download chart with “Dance the Night Away,” followed by Apink’s “I’m So Sick” at No. 2 and Shaun’s “Way Back Home” at No. 3. BLACKPINK’s “DDU-DU DDU-DU” charted at No. 4, while MAMAMOO’s “Egotistic” debuted on the monthly chart at No. 5. 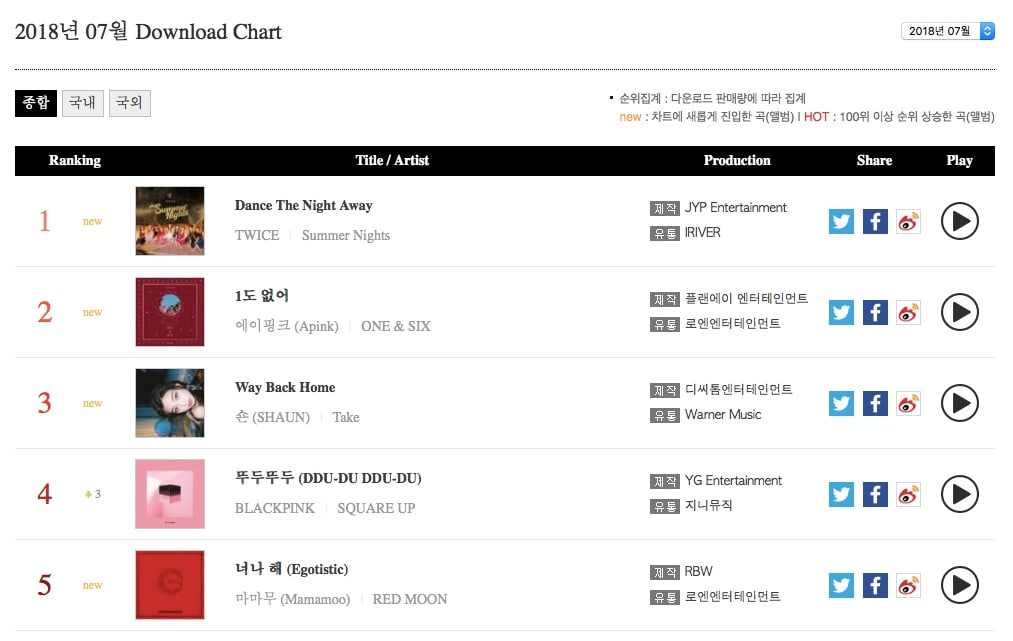 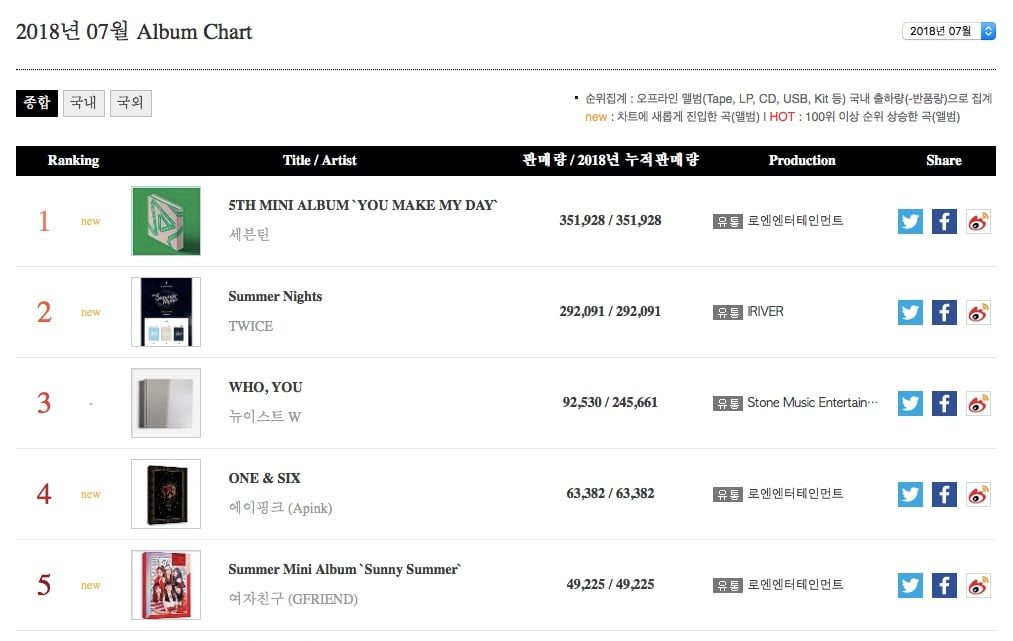 SEVENTEEN also shot up in the rankings to top the weekly physical album chart with “You Make My Day.” VIXX’s Leo debuted at No. 2 on the chart with “Canvas,” while SF9’s new mini album “Sensuous” debuted at No. 3. BIGBANG’s Seungri took No. 4 this week with “The Great Seungri,” followed by BTS’s “Love Yourself: Tear,” which rose six spots to No. 5. 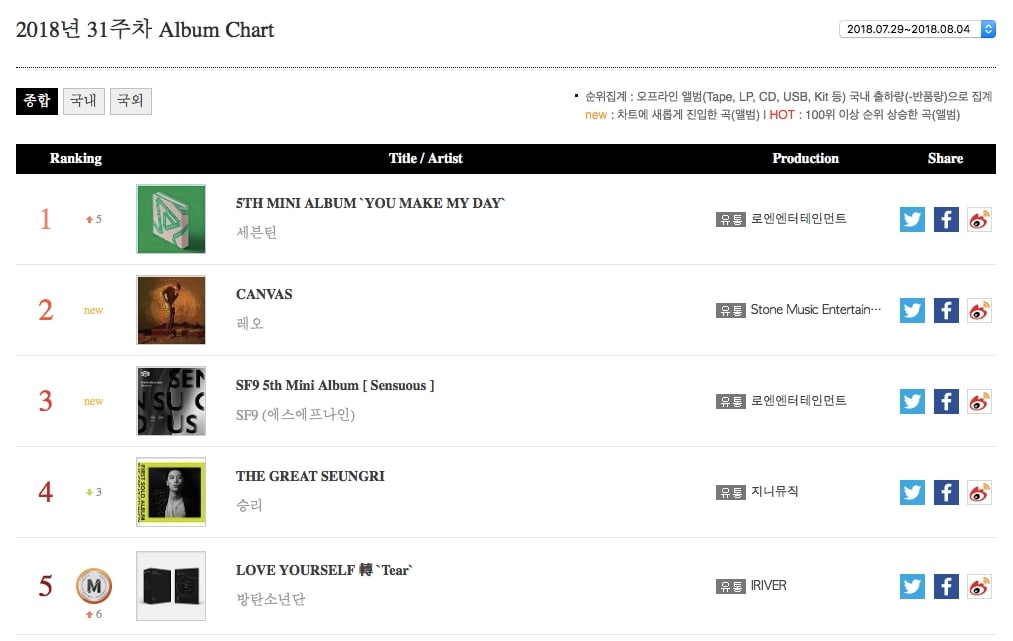 TWICE remained at No. 1 on the social chart this week with “Dance the Night Away,” with BTS’s “Fake Love” and MOMOLAND’s “BAAM” also maintaining their positions at No. 2 and No. 3 respectively. BTS and MOMOLAND each appeared twice in the top five, with BTS’s “DNA” claiming No. 4 and MOMOLAND’s “BBoom BBoom” charting at No. 5. 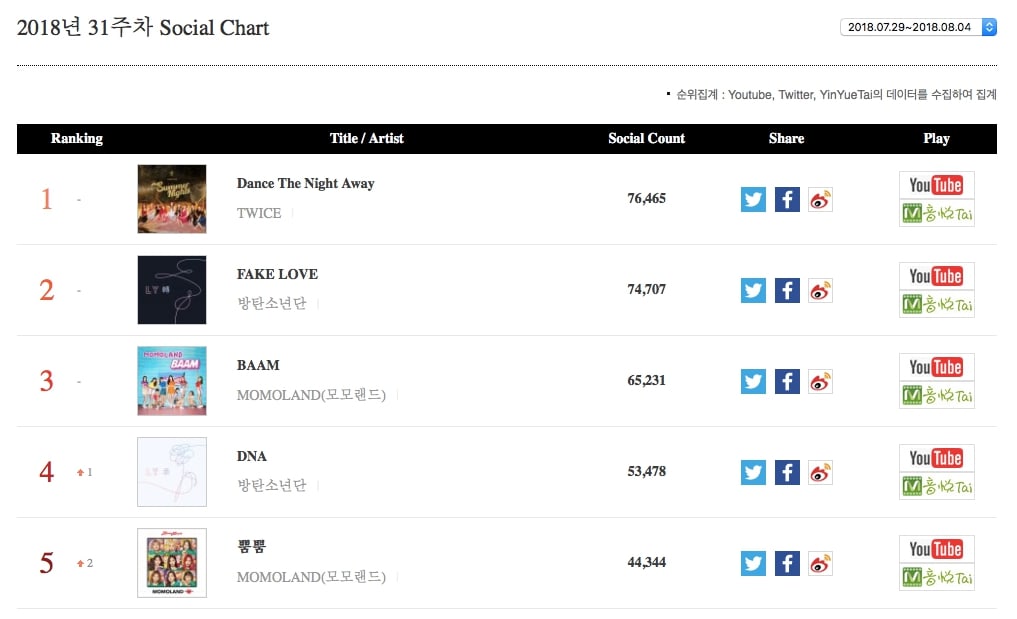 Block B’s Zico’s new collaboration with IU, “SoulMate,” debuted at No. 1 on this week’s overall digital chart, pushing each of the top five songs from last week down by exactly one spot. Shaun’s “Way Back Home” ended up at No. 2, followed by TWICE’s “Dance the Night Away” at No. 3, BLACKPINK’s “DDU-DU DDU-DU” at No. 4, and MAMAMOO’s “Egotistic” at No. 5. 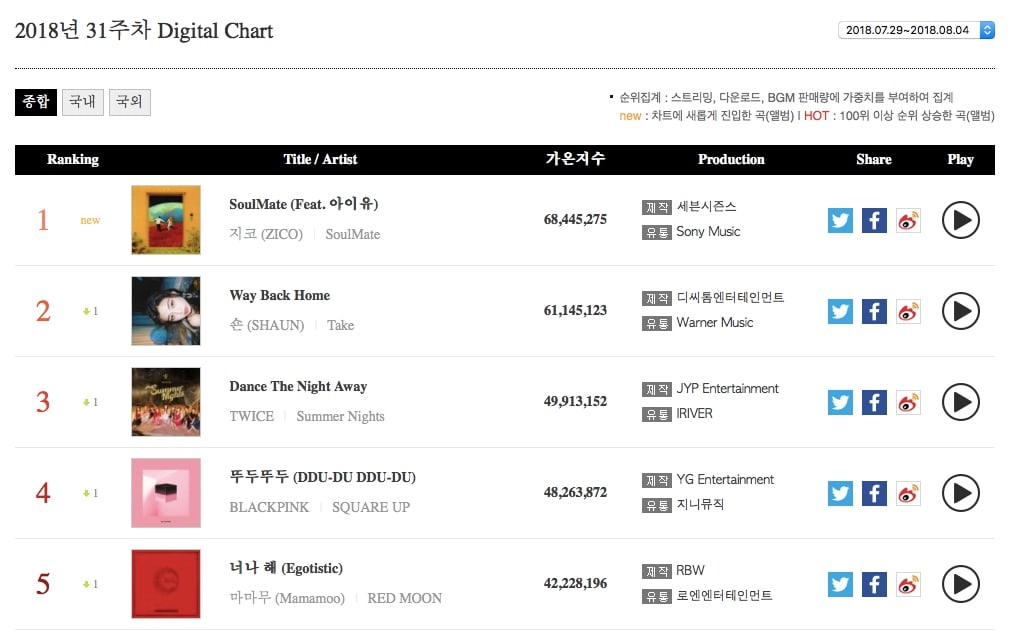 Zico also topped the weekly download chart with “SoulMate,” followed by Shaun’s “Way Back Home” at No. 2. iKON’s “Killing Me” debuted at No. 3 on the chart, with MAMAMOO’s “Egotistic” and TWICE’s “Dance the Night Away” rounding out the top five at No. 4 and No. 5 respectively. 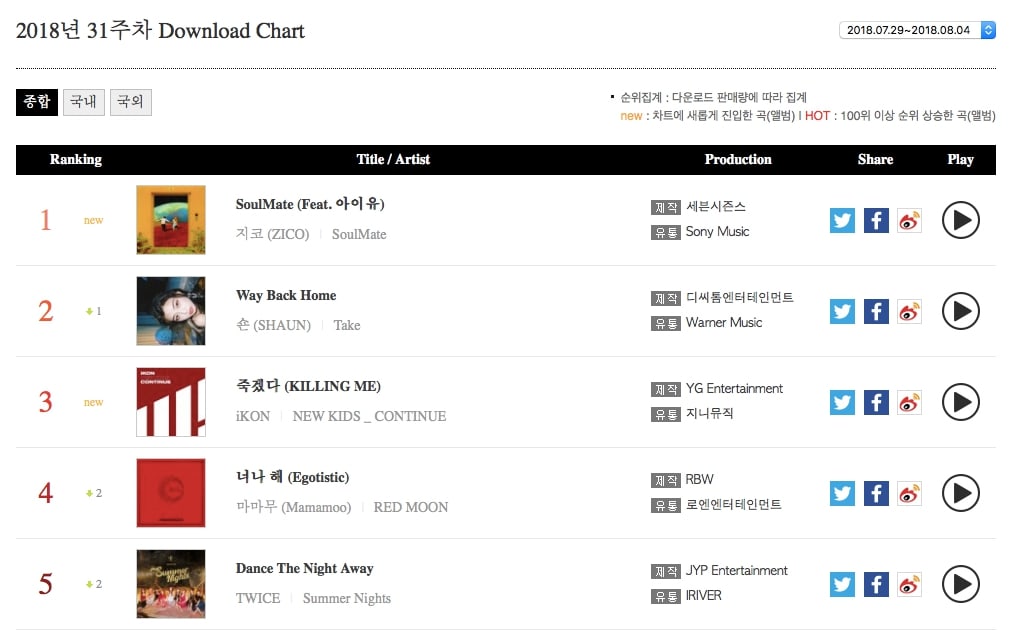 Shaun’s “Way Back Home” held onto its No. 1 spot at the top of the weekly streaming chart, with Zico’s “SoulMate” trailing at No. 2. TWICE’s “Dance the Night Away” took No. 3 for the week, followed by BLACKPINK’s “DDU-DU DDU-DU” at No. 4 and MAMAMOO’s “Egotistic” at No. 5. 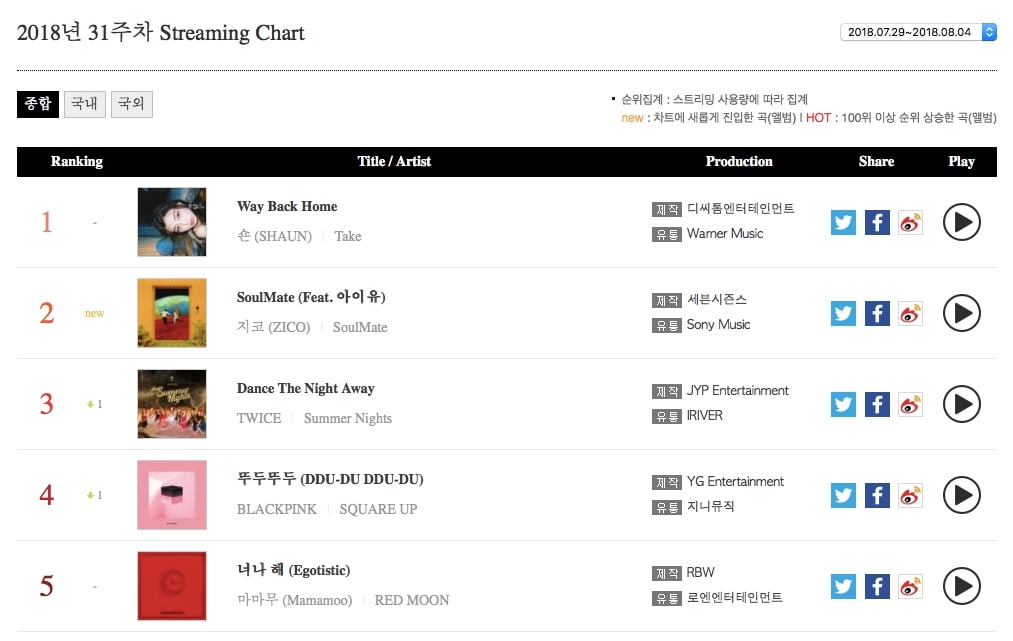