Watch: Cast Of “Lovely Horribly” Describes Drama And Gets Pranked During Interview

“Lovely Horribly” is a horror romantic comedy about top star Yoo Phillip (played by Park Shi Hoo) and drama writer Oh Eul Soon (played by Song Ji Hyo), whose lives are intertwined because they were born on the same day at the same hour. They share a zero-sum fate where one must be unhappy if the other is happy.

On August 10, the cast sat down for an interview on KBS’s “Entertainment Weekly.” Lee Gi Kwang described the drama as “full of lovely and horrible elements” that will explore the twisted fate of Song Ji Hyo’s and Park Shi Hoo’s characters.

Park Shi Hoo said, “I’ll be playing the character Yoo Phillip, who is a world-famous star. He has the power of the universe.”

Describing her character Oh Eul Soon, Song Ji Hyo added, “If the world famous star can do anything, then I’m someone where nothing goes right in her life. I’m an aspiring drama writer and my fate changes after meeting Yoo Phillip.”

Lee Gi Kwang explained, “I’m playing the role of a 30-year-old rookie producing director. Although he’s getting older, his love for Eul Soon remains unchanged like a sunflower. If my acting is good, then it could become a love triangle.”

Eunjung said, “The role that I’ll be playing is the world famous star’s official girlfriend of eight years who is an actress.” Choi Yeo Jin added, “I’m a world-famous drama writer. [I have] God’s fingers. These are characters that I created.”

Naming some of his elitist characters in the past, the interviewer asked Park Shi Hoo if it was easy to act as a world famous actor. He replied, “After hearing about it, I thought that [it would be easy], but it’s very difficult. It’s a cowardly role that I’ve never done before.” Giving her co-star a skeptical look, Song Ji Hyo added with a laugh, “He’s a huge coward.”

Choi Yeo Jin and Song Ji Hyo both testified that Yoo Phillip is the embodiment of Park Shi Hoo’s real-life personality. Park Shi Hoo continued to make his co-stars laugh by showing his humorous side during the interview.

On predicting the success of their drama, Choi Yeo Jin said, “It’s good if blood appears. There’s a lot of blood in the drama and a lot of blood also appeared in my dream.”

The entertainment news show then surprised the cast by having one of their staff members dress up as a ghost and sneak up behind the actors. Once they saw the ghost, the actors screamed and ran from their chairs. 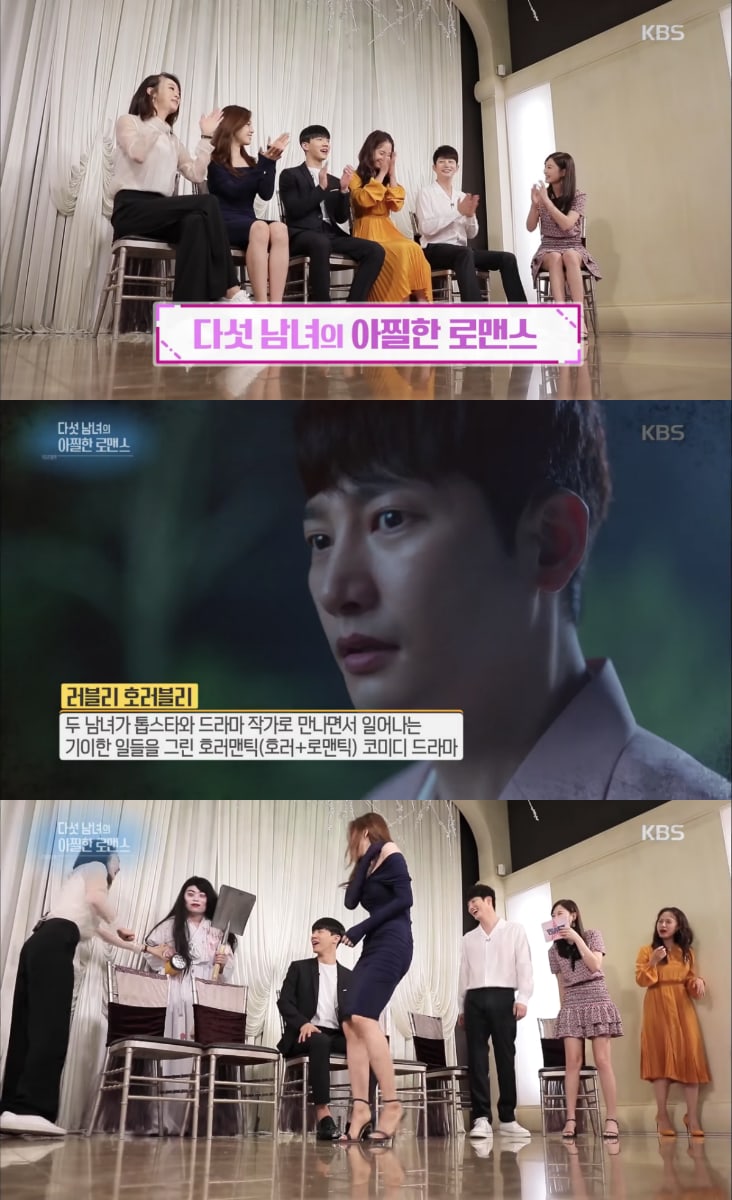 “Lovely Horribly” will premiere on August 13 at 10 p.m. KST and will be available on Viki!

Watch the video of the cast being pranked below: