On the August 10 broadcast of KBS’s “Entertainment Weekly,” Kim Young Kwang and Park Bo Young, stars of the upcoming film “On Your Wedding Day,” joined the show for a guerrilla date.

During the movie’s press conference, Kim Young Kwang had squatted down for a photo with her. When asked about their height difference, Park Bo Young said, “I’m always sorry, because he always has to walk around like this,” and gestured to Kim Young Kwang next to her, who was walking with his knees bent.

She added, “And his stride is really long, so if he takes one step, that’s two or three for me.” 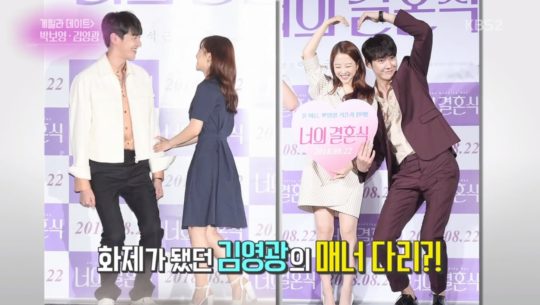 When asked about Kim Young Kwang, she immediately said, “He’s the best.” She said, “Nothing is ever calculated with him, and he just responds to things as they are.” 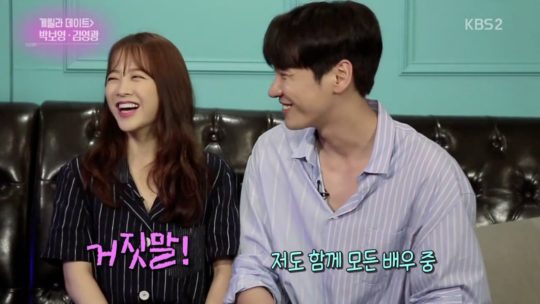 The two actors then played a lie detector game. Park Bo Young went first, and was asked the question, “Do you think Kim Young Kwang is the best actor you’ve worked with so far?” Park Bo Young said yes, and was promptly zapped.

Kim Young Kwang got the same question, asking if Park Bo Young is the best he’s worked with. He confidently responded yes, but was also hit with a zap.

Because both actors were caught in their lies, they joked, “We’re purely doing business. We don’t even talk to each other or meet when we’re not working. We’re just here to promote the movie.” 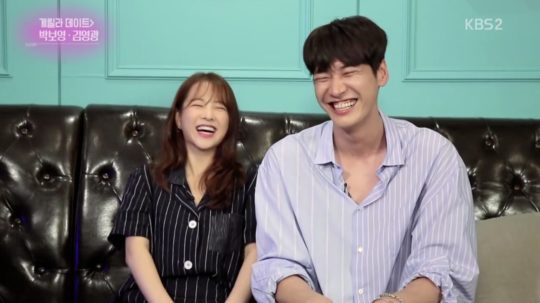 Entertainment Weekly
Kim Young Kwang
Park Bo Young
On Your Wedding Day
How does this article make you feel?