Actress Jin Ki Joo made a rare variety show appearance in the latest episode of “Running Man” and impressed the cast with her impressive résumé!

On August 12 of the SBS variety show, Jin Ki Joo appeared as a guest and began the show by expressing her surprise at what a variety show set was like. She stated, “This is my first time being around so many cameras.” In response, Yoo Jae Suk hilariously said, “These cameras aren’t all filming you, Ki Joo.”

She continued, “I’m not sure what to do since it’s my first time, but I’ll have fun.” 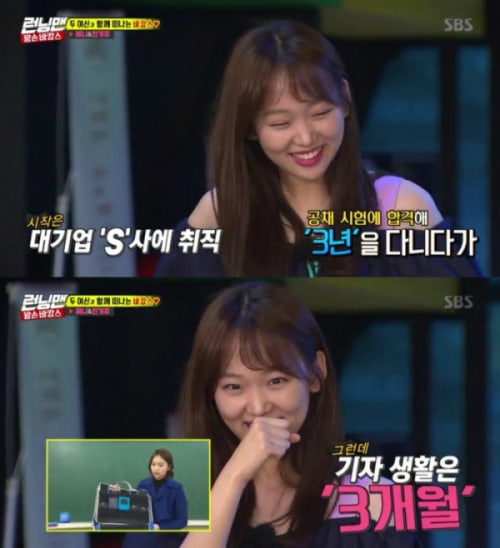 As Yoo Jae Suk introduced Jin Ki Joo, he revealed, “She’s the representative for hands of gold.” He further explained, “Whenever she takes exams, she passes them all. She made her start at Samsung, and stayed with the company for three years after passing the open recruitment.” Then, Yoo Jae Suk jokingly asked, “Why in the world did you quit?”

He continued, “Next, she passed [the test] to become a reporter, but quit after three months of that life. Finally, she tried her hand at becoming a supermodel. She ranked No. 3 [at SBS’ Supermodel Contest]. After that, she became an actress.”

Yoo Jae Suk finally concluded his introduction for the actress and said, “She definitely has that golden touch, but she can’t stay in one place for too long,” making everyone burst into laughter.

In response, Jin Ki Joo revealed the reason to why she became an actress. She stated, “As I grew older, I was able to finally gain the courage [to become an actress]. I don’t regret it.”

You can also catch up on an episode of the show here: