BLACKPINK’s Jennie Tests Her Luck Once Again On “Running Man”

On August 12, the variety show aired an “Unlucky Vacation” special, in which the cast categorized each member as either “lucky” or “unlucky.” “Lucky” members Song Ji Hyo, HaHa, Kim Jong Kook, and Yang Se Chan each had to randomly pair up with one of the “unlucky” members. The resulting pairs were Song Ji Hyo and Lee Kwang Soo, Yang Se Chan and Yoo Jae Suk, HaHa and Ji Suk Jin, and Kim Jong Kook and Jun So Min.

Jennie and actress Jin Ki Joo appeared on the episode as guests, and the cast declared that after Jennie’s last appearance on the show in July, she was definitely one of the “unlucky” members. At first, Jennie argued that she was actually a “lucky member,” but after a streak of bad luck at the beginning of the episode, she admitted, “I’m now starting to lose some confidence.”

However, the BLACKPINK member turned her fate around later on in the episode, starting with the archery game. After expressing confidence in the sport, Jennie faced off against Kim Jong Kook proved her skills by scoring eight and nine points. She also beat Kim Jong Kook for the second time during the soccer game and unexpectedly won the title of “Kim Jong Kook’s sniper.” 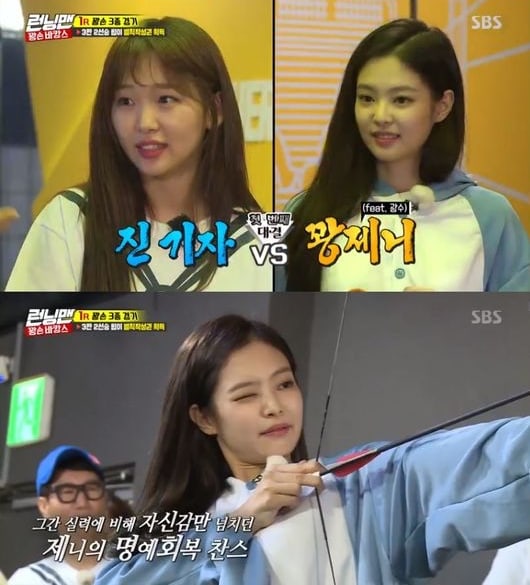 The cast and guests then faced another game of luck when randomly selecting their cars. The production staff designated two cars in which the passengers wouldn’t be allowed to turn on the air conditioning, and Jennie ended up having to travel in one of those two cars. However, she and her team later succeeded at the summer song relay mission and was able to earn some cool air.

Jennie continued to make the cast laugh throughout the rest of the episode with her efforts at a three-letter acrostic poem, cheek-to-cheek game, and tube stealing game. She also danced to BLACKPINK’s “DDU DU DDU DU,” HaHa and Skull’s “Dang Diggi Bang,” and Red Velvet’s “Red Flavor.”

In the end, thanks to their hard work, Jennie’s team won, and HaHa concluded the episode with a reggae zombie dance.