Seungri Reveals The Truth About Various False Rumors And Misunderstandings

BIGBANG’s Seungri appeared on the August 13 broadcast of JTBC’s “Please Take Care of My Refrigerator” and cleared up various rumors and misunderstandings about him based on his image.

The hosts gave Seungri the floor to clear the air about whatever he wanted, and he started by saying he’s not the playboy everyone thinks he is. He said, “A lot of people think I really like women, and that I’m always seeing a lot of people, but that’s not the case.”

He continued, “Even when there are women, they’ll say, ‘You’re so fun and charming,’ but then they’ll ask for G-Dragon’s or T.O.P’s phone number.”

Seungri then outed Daesung as the member who has the opposite image of Seungri but also not as he seems. He said, “Daesung’s [image] is very bright, and he seems like he might be quiet, but when there are women, he’ll immediately order red wine. Even though the rest of us were drinking sake. And then all of a sudden [Daesung and the woman] will be drinking wine, and the rest of us four will be drinking sake.” 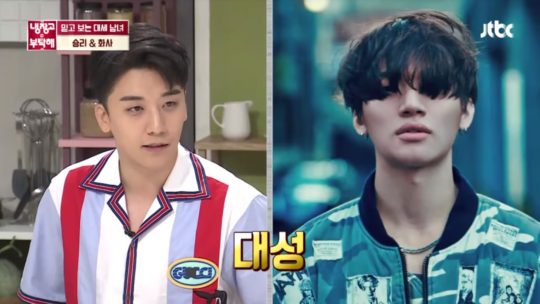 When the hosts brought up that Daesung will be watching from the military, Seungri joked, “I’d like to say something to the people at Daesung’s base. Please make sure the weapons are securely locked up [just in case Daesung comes after me].”

Seungri then cleared up rumors about him renting an entire island for a party. “I just made a reservation at a resort,” said Seungri. “That got distorted and people started saying I reserved the entire island.”

He explained that the event was a networking party for everyone he knows, as well as his birthday party. “I didn’t want all of my connections to go to waste, so I wanted to have an event where people I know could meet each other.” Seungri joked, “And if two people met and worked out some sort of business deal, they could each give me five percent in commission. It’s not like I did nothing, I made the bridge.” 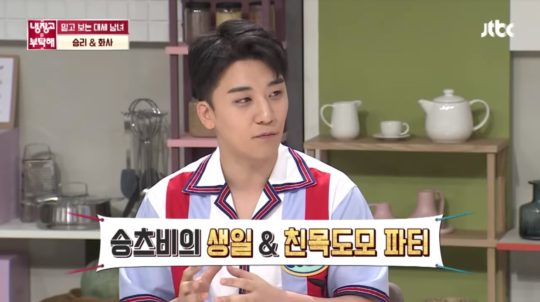 BIGBANG
Please Take Care of My Refrigerator
Seungri
How does this article make you feel?