On the August 13 broadcast of JTBC’s “Please Take Care of My Refrigerator,” Seungri talked about how YG head Yang Hyun Suk has started to treat him differently, as well as a recent conversation he had with Taeyang, who is currently serving in the military.

Seungri has been making a lot of television appearances with his latest comeback, and his viewership ratings have been very impressive, with the BIGBANG member hitting a high of 23 percent. Seungri said, “The drama ‘My Love From the Star’ also was around [23 percent],” and joked, “so what’s really different from me and Kim Soo Hyun?” 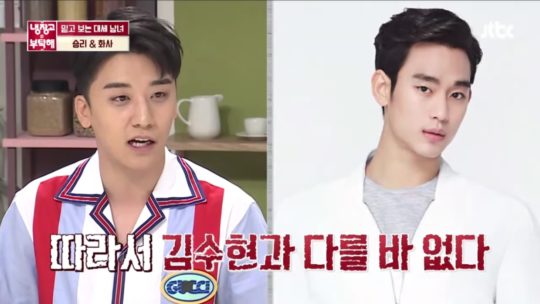 Members from BIGBANG hold all-time ratings records for “Please Take Care of My Refrigerator.” The hosts said during the show that Taeyang’s episode was the most-watched ever at an average of 10.04 percent, peaking at 12.3 percent, and that G-Dragon holds the record for the second most-watched episode, with an average of 8.25 percent. 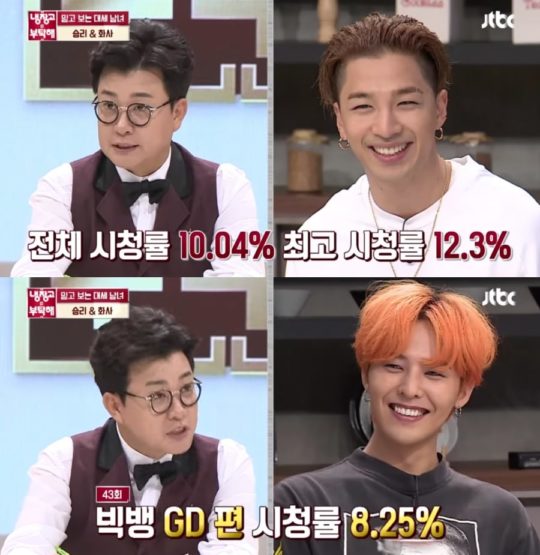 On his own ratings for the show, Seungri said, “Humbly, I estimate they’ll come out to be around 13 percent.” He added, “Looking at our numbers for social media followers, I’m fourth in the group. It’s incredibly embarrassing. I’m going to catch up with viewership ratings, and then I’ll catch up with my number of followers.”

When asked how Yang Hyun Suk has been treating him these days, Seungri said it’s a complete 180 from before.

“Some time ago, I was practicing for a concert, and Yang Hyun Suk personally brought me cold noodles from a really famous restaurant.”

He also now sits next to Yang Hyun Suk at dinners. Seungri said, “Even five years ago, I liked to sit where Yang Hyun Suk couldn’t see me. Because he would always nag at me. Now, when he sees me, he’ll ask me to sit next to him.” 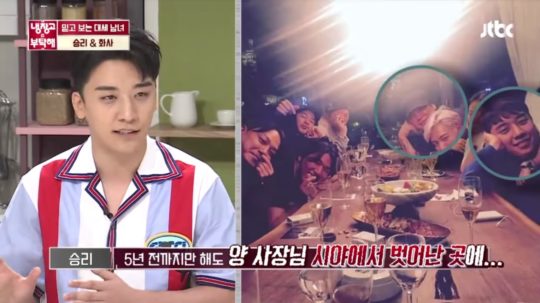 The other members of BIGBANG are currently all in the process of completing their mandatory national service. Seungri said, “They’ll often contact me with the phone call they get as a reward for doing well in training.”

“Taeyang called me the other day and said to me, ‘I miss you a lot.. I think I should have lived more like you.’” Seungri explained, “My personality is such that I like going out to meet people and being where the action is, but the BIGBANG members always went straight home or to their hotel after concerts and never met up with anyone at all. So when he called me, he said he wondered if he should’ve been a little bit more like me.” 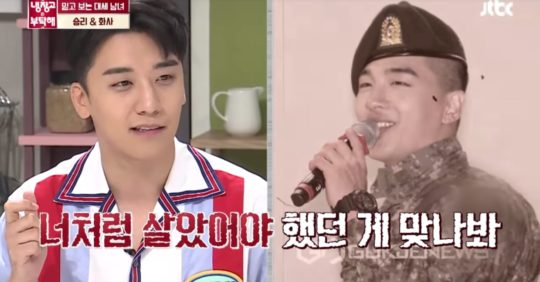 On enlistment, Seungri said that the BIGBANG members had talked about all enlisting together, but the businesses that Seungri had started became too big and he couldn’t leave right away.

“What I’m worried about,” said Seungri, “is that I’m going to be in the military when everyone else comes out. What are they going to be saying about me when I’m not around?”

BIGBANG
Please Take Care of My Refrigerator
Seungri
How does this article make you feel?