On the next episode of “Familiar Wife,” Ji Sung goes on the run to chase a mysterious stranger!

Ji Sung is currently starring in the tvN drama as Cha Joo Hyuk, a bank employee who travels back in time and ends up changing his present-day reality by making a single life-altering decision. After returning to the present, Cha Joo Hyuk finds himself married to another woman and reuniting with his original wife Seo Woo Jin (played by Han Ji Min) as colleagues at his bank.

In newly released stills from the drama’s upcoming episode, Cha Joo Hyuk frantically chases after a man he sees in the subway station, pushing past the other passengers to try and catch him. However, he ultimately winds up falling to his knees in exhaustion and disappointment after failing to reach him. 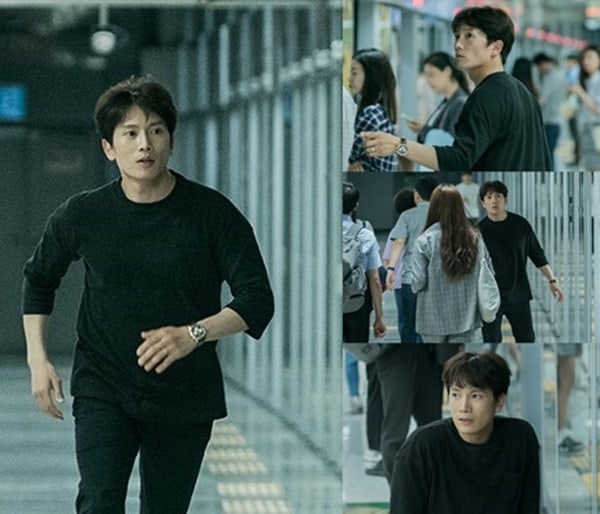 Although the photos reveal no information about the mystery man’s identity, the producers of “Familiar Wife” teased, “Joo Hyuk was beginning to get comfortable in his newly changed reality, but on this week’s broadcast, he will find himself confounded and at a loss for what to do. Ji Sung’s acting, which is even more layered than before, will add to the suspense.”

They added, “Viewers have fallen for the character of Joo Hyuk—an ordinary head of the household, a pitiful office worker, and an immature husband whom Ji Sung has made even more realistic and relatable through his unchangingly detailed acting.”

To find out the reason behind Cha Joo Hyuk’s desperate chase in the subway station, catch the next episode of “Familiar Wife” on August 15 at 9:30 p.m. KST!

If you haven’t already started watching the drama, you can check out the first episode with English subtitles here:

Ji Sung
Familiar Wife
How does this article make you feel?