Park Bo Young and Kim Young Kwang appeared on the August 14 broadcast of SBS’s “Night of Real Entertainment” and chatted a bit about their upcoming romance film “On Your Wedding Day.”

When asked to introduce the film in a lovely way, each of the actors deferred to the other. Park Bo Young said, “In this film, Kim Young Kwang is the lovely one. My character is actually pretty cranky.” Kim Young Kwang shot back, “But Park Bo Young is lovely even if she’s cold and cranky.” With clenched teeth and a smile, the actress joked, “Just come out and say you don’t want to [introduce the movie].” 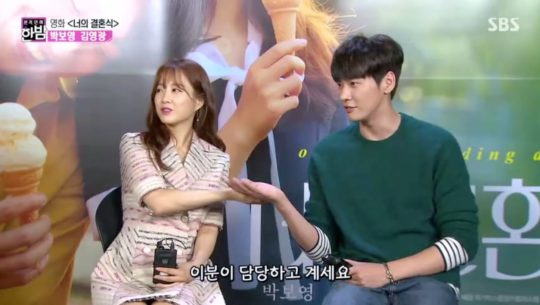 The film follows the two main characters from high school to their first jobs. The most difficult part of the film, said Park Bo Young, was trying to play teens. “Kim Young Kwang is in his early 30s and I’m in my late 20s, so [before filming] I wondered if we could truly bring out the innocence of teens. It turns out, you can’t erase the years that have gone by. We tried to do everything we could with styling.” 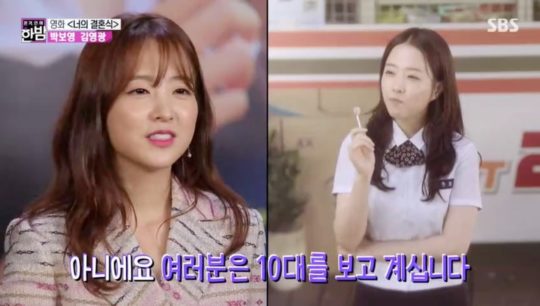 Talking about their own first loves, Kim Young Kwang said there was a girl he really liked in grade six in primary school (about 12-13 years of age). “She helped me a lot with math. She told me that if I got above a certain score, she would give me a present. I was so excited and studied so hard, but I couldn’t remember what I studied for the last few questions on the test. I cried on the spot, while I was taking the test.” 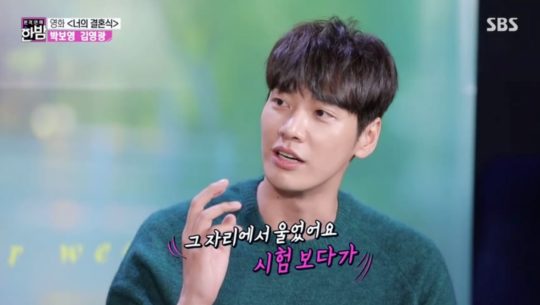 Park Bo Young said, “When thinking back about my first love, rather than the fact that I really liked that person, I think I like how innocent I was back then.”

Kim Young Kwang talked about how great Park Bo Young is on set and that she has an ability to make everyone really comfortable. Park Bo Young said playfully, “If you keep saying things like that, it makes me wonder if I really have to be like that on set. I’m not that kind of person.”

Kim Young Kwang went on, however, and said, “Isn’t she lovely even now? As she’s denying this?” 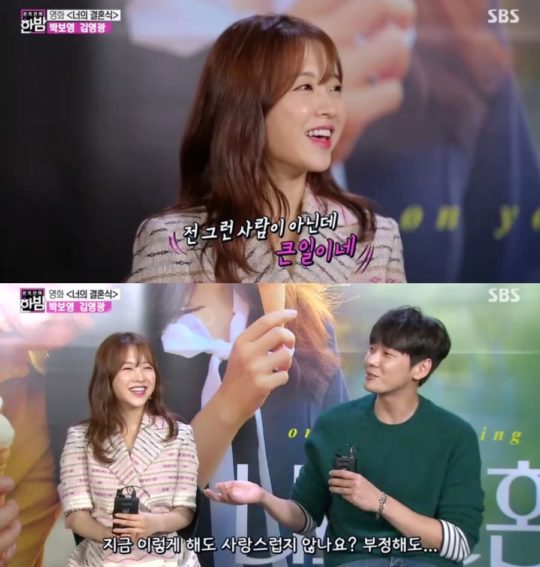 Kim Young Kwang
Park Bo Young
Night of Real Entertainment
On Your Wedding Day
How does this article make you feel?