Mnet’s “Produce 48” has shared a behind-the-scenes video of the contestants practicing for the upcoming concept evaluation performances!

In the video shared on August 13, each group described their track and shared thoughts on preparing for the concept evaluation.

Miyazaki Miho described her group’s song by saying, “‘1000%,’ the song that we’ll be performing, is very bright and a song that matches well with summer. The lyrics express the excited feelings of a girl who has fallen in love. It’s a very happy and bright song.”

Park Hae Yoon began, “‘See You Again’ is of the pop dance genre. It’s a song with feelings of innocence and sadness.” Murase Sae stated, “I think that ‘Rumor’ is the sexiest song out of all of the evaluation songs.”

Na Go Eun said, “‘To Reach You’ is an innocent but sad song. The sadness is in the lyrics, so I think it’ll be good if you think about the lyrics while listening to it.” Lee Ga Eun explained, “‘I Am’ is a song that tells someone, ‘Even though I’m lacking, imperfect, clumsy, and make mistakes, I still love myself.'”

Takahashi Juri said, “I’m really happy, but I think that this is very important, so I want to show our own unique color. National producers, please look forward to it!” 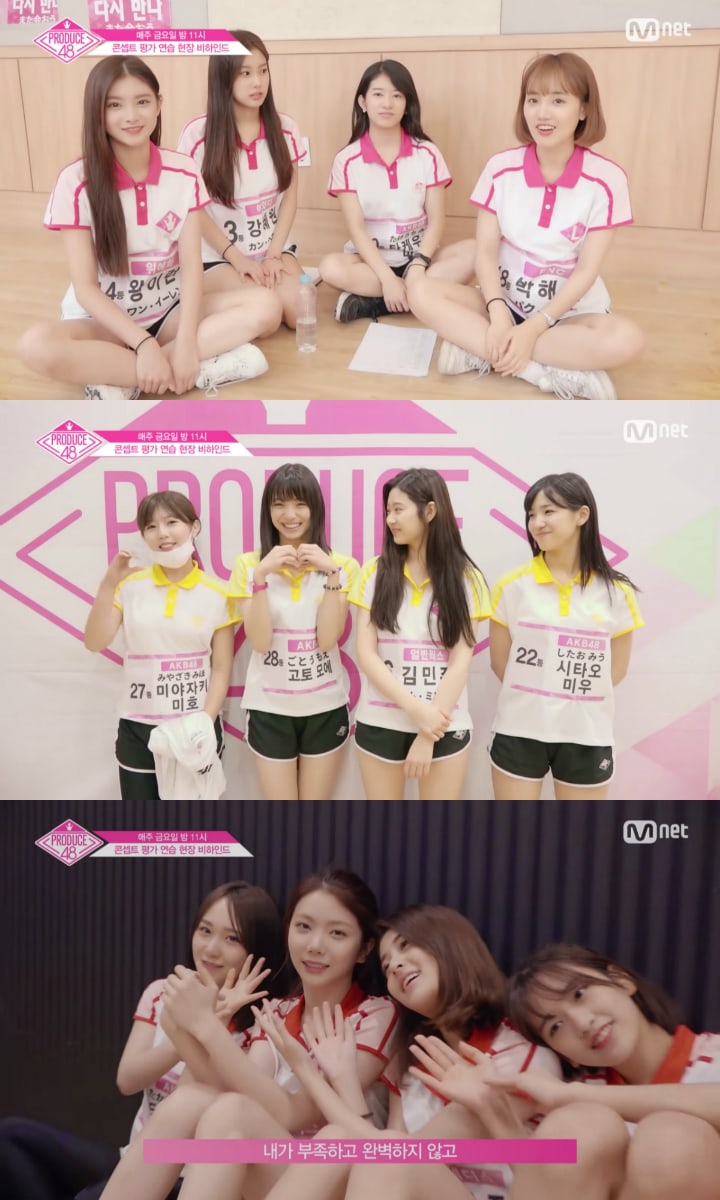 The contestants continued to have fun together while practicing and didn’t forget to say hello to viewers.

When asked if the practice was going well for “1000%,” Kim Min Ju answered, “We came here as transfer trainees, so it’s only been a day since we started practicing. But, under the instruction of Miyazaki Miho who practiced this song for a week, we’re working hard on it.”

About her “Rollin’ Rollin'” members, Shiroma Miru said, “There are only members that I’m close with in this team, so I’m really happy. I look forward to our practice.”

The Japanese contestants worked hard to improve their pronunciation of Korean words with Korean contestants or by listening to the song with their earphones. The contestants also had fun amongst themselves by acting out funny scenarios and talking during breaks.

Each group then expressed their determination and hopes for this upcoming evaluation. Wang Yi Ren told viewers, “At the third evaluation, we will make sure to become the overall first place team and receive the benefit points.” Shitao Miu stated, “[We’ll try] not to lose to our rival team, so that ‘1000%’ can be No. 1!”

Kim Na Young said, “We will work really hard and practice until the day of concept evaluations to make sure we receive the benefit points!” Using the title of her team’s track, Jang Gyu Ri and her members said, “Hoping that our hearts reach the national producers’ hearts!”

“Produce 48” will air the concept evaluation performances on Friday, August 17 at 11 p.m. KST. Check out the video below.

Let us know who your favorite contestants are in our “Produce 48” international prediction polls!