Han Hye Jin spoke about her relationship and some of the negative effects of dating in the public eye on KBS Joy’s “Dating Interference 2” (literal title).

“Dating Interference 2” is a talk show where people submit stories about dating and celebrity panelists discuss them.

On the August 14 premiere of its second season, Han Hye Jin sympathized with one of the stories.

The celebrity panelists first pointed out how Han Hye Jin may have a lot to contribute to the show since she’s currently publicly dating Jun Hyun Moo.

Talking about her relationship, Han Hye Jin shyly began, “It’s good.” When asked if Jun Hyun Moo was sweet to her, she answered, “He’s an attentive person. He takes good care of me because he’s attentive.”

Seo Jang Hoon and Kim Sook commented that Jun Hyun Moo appears indifferent on TV shows. Alberto Mondi, who has known Jun Hyun Moo for a while from JTBC’s “Abnormal Summit,” said, “He’s really good to someone he likes. He’s a romantic.”

The panelists then watched a reenactment of a viewer’s story about the difficulties of publicly dating while in college. When Han Hye Jin sympathized by saying, “It is burdensome,” the other MCs asked, “How is it difficult?”

Han Hye Jin explained, “Publicly dating is the same as that campus couple. Dating is when two people meet and focus on each other, but no matter where we go and what we say, the essence of it is being lost, so I don’t think it’s easy.”

When Joo Woo Jae brought up how many couples broke up after publicly dating, Han Hye Jin said, “It’s a given that people say that they haven’t seen good results from publicly dating because when other people are dating privately, you don’t know if they’re dating or have broken up. But when it’s public, people know about the break-up too.” 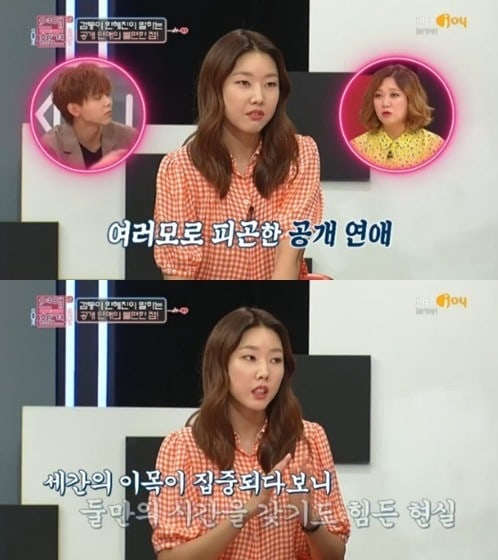 Han Hye Jin and Jun Hyun Moo previously confirmed their relationship in February and are currently fixed members on MBC’s “I Live Alone.”

Han Hye Jin
Jun Hyun Moo
How does this article make you feel?