tvN’s upcoming drama “The Smile Has Left Your Eyes” has revealed its first sneak peek of stars Seo In Guk and Jung So Min in character!

Based on the popular 2002 Japanese drama of the same name, “The Smile Has Left Your Eyes” will tell the story of a dangerous murder suspect named Kim Moo Young (played by Seo In Guk) and a warm-hearted woman named Yoo Jin Gang (played by Jung So Min), who happen to share similar emotional scars.

The newly released stills from the drama show Kim Moo Young and Yoo Jin Gang meeting for the very first time. Kim Moo Young is visibly drawn to Yoo Jin Gang, and he is unable to hide a wry, amused smile as he watches her from behind. Yoo Jin Gang, who appears to have noticed the fact that Kim Moo Young can’t take his eyes off her, looks at him distrustfully at first; but before she knows it, she finds herself engaged in conversation with the suspicious-looking stranger. 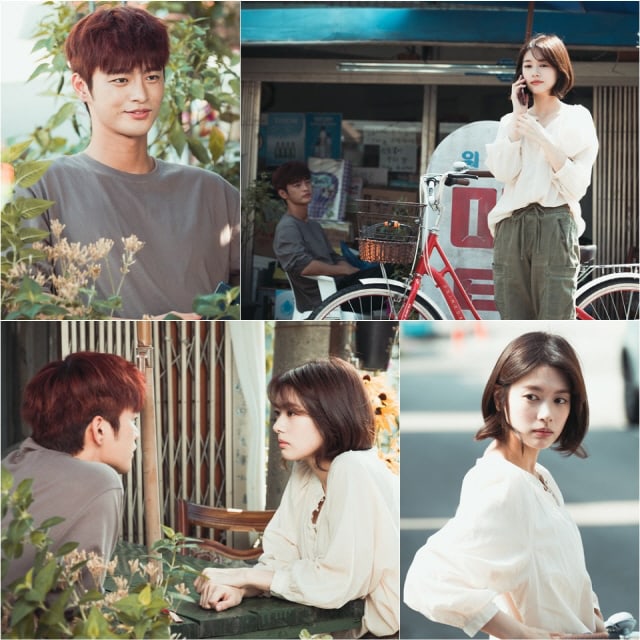 According to the production crew, Seo In Guk and Jung So Min kicked off the shoot by greeting each other with an enthusiastic high-five, and in spite of the incredibly hot weather, the two actors remained in high spirits throughout filming for the scene.

Seo In Guk remarked, “I’m delighted to be able to film [this drama] with director Yoo Jae Won and the production crew, with whom I worked together on my previous drama ‘High School King.’ Maybe that’s why, but we were able to perfect our teamwork from the very first shoot. I’m honored to be able to reunite on set with people that I had missed dearly.”

Jung So Min also mentioned her gratitude to her co-stars for their moral support on the first day of filming. “I was very nervous about the fact that my scene was the first to be filmed for the entire drama,” she revealed, “but [Seo] In Guk and [Do] Sang Woo, neither of whom were filming any scenes that day, still came all the way to the set to cheer me on. I was so thankful, and thanks to their support, I was able to gain strength and wrap up the first day of filming without any problems.”

“The Smile Has Left Your Eyes” will premiere on September 26, following the end of Ji Sung and Han Ji Min‘s drama “Familiar Wife.”

Are you excited to see Seo In Guk and Jung So Min star in this new remake? Leave your thoughts below!