On August 17, Eunkwang hung out with members from his idol gaming crew “We’re the Strongest Idols.” On last week’s episode, Kwon Hyun Bin and B.A.P’s Youngjae came to visit Eunkwang’s home for the first time.

On this week’s episode, they were joined by B.A.P’s Himchan and the four of them went out for drinks. Himchan asked Eunkwang, “At what age do you want to get married?” and Eunkwang replied, “Marriage. I wanted to talk about marriage too.”

The female panelists who were watching the footage at the studio were surprised to hear that this was their topic of conversation.

Himchan said to the guys, “If I have someone that I love and make up my mind that I want to get married, then I think I’ll get married right away.”

Eunkwang agreed by saying, “Me too. I want to get married early.” When Himchan said, “My dream was to get married at 25,” Eunkwang excitedly replied, “Oh? That’s similar to me.” Himchan added, “I want to become a young dad,” and Eunkwang also said that he wants to be one.

Youngjae joked, “Revealed for the first time! Seo Eunkwang to get married soon!” and Kwon Hyun Bin commented, “For a second, I thought it was real and was surprised.”

Eunkwang then asked Youngjae when he wants to get married. Youngjae answered, “Around my mid-30s,” and Kwon Hyun Bin agreed. Youngjae explained, “If I get married in my 40s, I may be old when my child goes to elementary school.”

After listening to his friends, Eunkwang said, “So everyone thinks about these kinds of things. I thought I was the only one.” Youngjae added, “If possible, I want to get married when I’m a bit younger and cooler.” 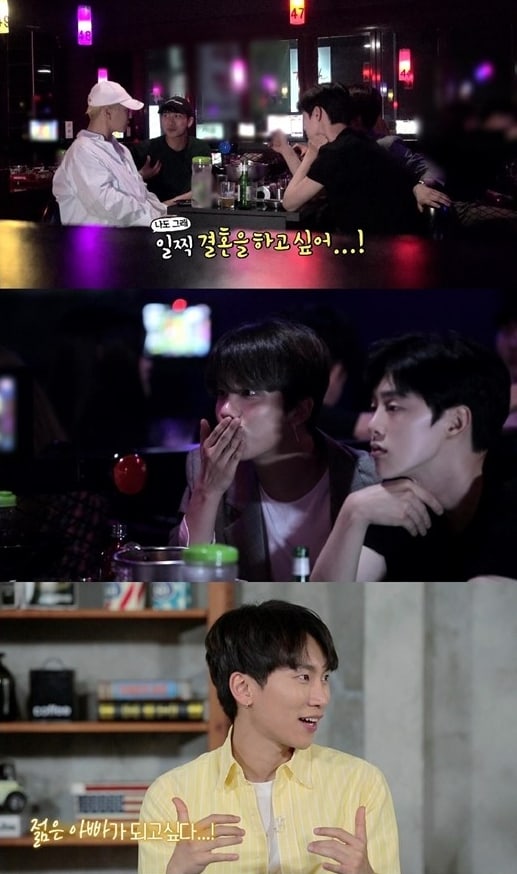 At the studio, Eunkwang said, “I realized this during the conversation, but all men want to be young dads. It was the first time we talked about it, but we all had the same thought.”

Jang Do Yeon commented, “I was really surprised because to be honest, I talk about those kinds of things a lot because I’m 34 years old and there are many people around me who think about marriage. But I was surprised that Eunkwang said this.”

Girls’ Generation’s Sunny added, “I was surprised too. I had assumed that you guys are young, would want to work, and were not at an age where you’d want to settle down.” When asked if he was lonely, Eunkwang answered, “No. I have fans who love me.”

Youngjae asked the others, “How did we get to talk about becoming young dads?” Himchan and Eunkwang replied, “We’re at that age now.” Eunkwang continued, “When I return from the military, I’ll be 32 or 33. After some promotions, I’ll be 35 and in my mid-30s. Then, I have to get married. I hope it turns out that way and I want to receive blessings for my marriage.”

Himchan added, “Honestly speaking, we’re no longer in our fourth or fifth year of promotions. We’re beyond that and in that transition period. It’s the most difficult time because if you look at it from just a work perspective, there’s the contract, team, fandom. We think about a lot of things. We can’t just choose one thing.”

Eunkwang added, “We’re at an age where there are a lot of things to consider, like the issue of the military.” Himchan said, “Aren’t you guys similar to us? When my group is all together again after completing our military service, I’ll be 38 years old.”

Eunkwang answered, “We want to continue promoting BTOB as a whole group, but if we go to the military in order and come back, I’ll be 35 years old. I think about this sometimes, but I’m so envious of Highlight. They’re all the same age, so they can go to the military at the same time.”

When Himchan asked Eunkwang about his hopes for the future, Youngjae interjected, “I want BTOB to last for a while like g.o.d.” Eunkwang added, “What the seven of us keep talking about is that no matter what, let’s stay together. Kind of like g.o.d.”

Youngjae said, “BTOB has really good energy,” and Himchan added, “I learn a lot from your group. When I see BTOB, I really like it.” Eunkwang concluded, “We should continue for a long time.”

At the studio, Eunkwang said, “I realized that when guys get together, we get playful at first and then serious at the end. We cry, cheer each other on, and end on a serious note while talking about life.”