Apink’s Namjoo was taken to a local hospital on “Law of the Jungle” due to acute disc herniation in her neck.

On the August 17 broadcast of “Law of the Jungle,” the cast members, after successfully building a large raft, made their way out to the ocean.

Once close to their destination, however, Apink’s Namjoo revealed that she was in a lot of pain due to a herniated disc in her neck. 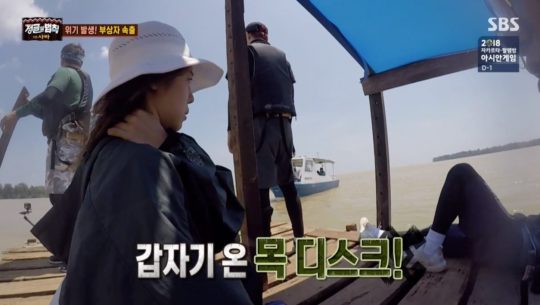 Namjoo said in an interview, “The night before, my back hurt a lot, and it kept waking me up. Normally, even if my neck hurts, it gets better if I stretch it out.” She said it was a situation where everyone was tired, and she felt bad about having to let people know that she was in pain.

Namjoo and the team moved to a boat and then parted ways, with Namjoo and Tony, who was showing signs of dehydration due to an extended time in severe heat, being taken back to the base camp.

When asked if she was feeling any numbness, Namjoo said that nothing was numb yet, but her right arm felt a little different from her left. The team doctor then came to her and said that because she had experienced acute disc herniation before, it would be best to take it easy. The doctor said, “It’s possible you won’t be able to continue filming. We’re going to take you to a local hospital to get you checked out one more time, but in my opinion, returning to film the show will be difficult. You probably can feel that that’s what’s best, too.”

Protesting, she said, “I really don’t want to go.. we just started.” 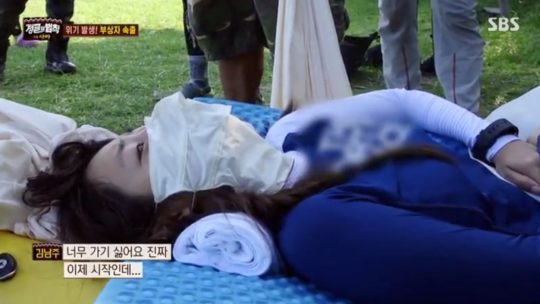 In her interview, Namjoo said, “I even worked so hard in underwater training because I was looking forward to it so much. I really didn’t want to leave. We were almost at the ocean. I was really sorry [to the team], and sad that I couldn’t be there with them to the end.”

Apink
Law of the Jungle
Namjoo
XPN
How does this article make you feel?