JYJ’s Kim Jaejoong made a surprise appearance during the August 14 recording of tvN’s “Comedy Big League” as a member of the audience.

In a preview for an upcoming broadcast, the studio audience starts buzzing with excitement in the middle of a skit, to the point where the actors on stage address the issue and introduce Kim Jaejoong, who is sitting at the front of the audience. 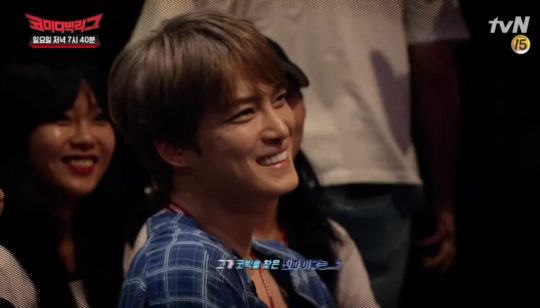 A source from tvN said, “Kim Jaejoong came to see the show because he is friends with one of the comedians. He wasn’t an official guest on the show, and we had no idea he would be there either. However, because of the atmosphere that night, he did participate in an impromptu skit.”

Kim Jaejoong’s agency also commented on the singer’s appearance, saying, “It was something he went to on his personal time to support his friend, comedian Lee Jin Ho.”

Comedy Big League
JYJ
Kim Jaejoong
How does this article make you feel?