Watch: Choi Daniel And Park Eun Bin Are Being Haunted By Lee Ji Ah In Teasers For New Horror Drama

The first teaser opens up in a dark setting of a muddy field on a rainy night. An array of cases ranging from kidnapping to car accidents appear on the screen. Choi Daniel asks, “Inhumane cruelty. Is it the work of humans or…?” Then the scene changes to Choi Daniel standing in front of an eerie house, and the door creeks open in a scary manner. Lee Ji Ah’s voice asks, “If I do this, will you be in pain? Will you be angry?”

Park Eun Bin determinedly says, “Please find the one who killed my little brother.” Both Park Eun Bin and Choi Daniel run around, searching for the truth. In frustration, Choi Daniel asks, “Why are you doing this? Why did you kill him?”

The second teaser is deceiving as it opens up with Park Eun Bin standing under the radiant sunshine with a sweet melody playing in the air. Everything seems peaceful until Choi Daniel walks up to her and puts her hearing aid on for her. As soon as her hearing aid is on, she hears a sharp screaming as all sorts of horrific images flash through her mind.

A cold voice speaks, “You can kill them. Yi Rang died because of you.” Park Eun Bin clutches onto her ears as if she’s in pain, and Choi Daniel calls out her character’s name to catch her attention. Suddenly, Park Eun Bin stares at something behind his shoulder, and he turns around to see Lee Ji Ah in a red dress. What’s even more terrifying is that the security camera recording them didn’t capture her on video, causing viewers to wonder Lee Ji Ah’s true identity. 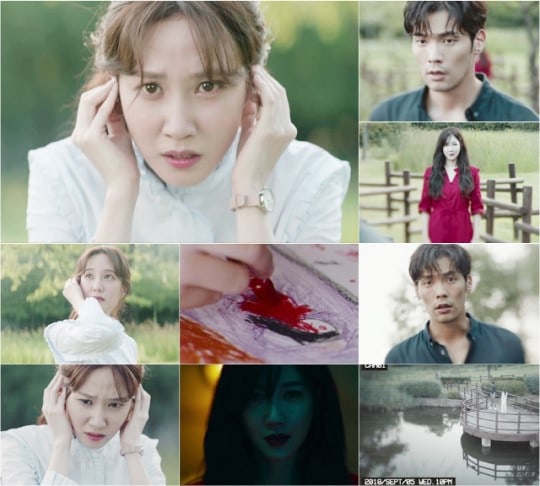 The first episode of “The Ghost Detective” will air on September 5.

Check out the chilly teasers below!