Seunghee impressed everyone starting from the show’s first round “Body Singer,” where celebrities have to describe a song with their body and without talking.

She quickly answered the first question as well as the next question acted out by JooE. Han Dong Geun, who was a member of Seunghee’s team, made everyone laugh with his laidback demeanor. He explained the question slowly and his teammates looked at him with frustrated facial expressions.

Seunghee, on the other hand, even guessed the correct answer for her opposing team’s question and sang Seo Moon Tak’s “All You Need Is Love.” Surprised that she recognized such an old song from the past, Lee Soo Geun’s teammates asked her, “How do you know that song?”

The Oh My Girl member continued to excel during the emoticon quiz, which is when, as the name suggests, they must guess songs based on a series of emoticons. During the singing quiz, she transformed into a vocal trainer and passionately taught her teammates their parts of the medley. 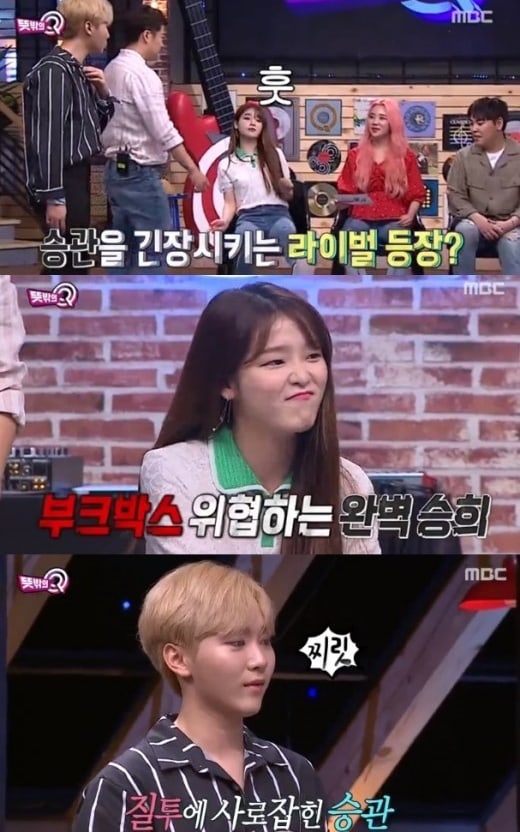 Yoo Se Yoon commented, “Seunghee is perfectly [our show’s] producing director Choi Heng Ho’s style.” Jun Hyun Moo added, “She should be a fixed member.” Seunghee smiled and replied that this was just her type of thing.

Seungkwan, who is known to be an ace on the show, made everyone laugh when he appeared nervous to face off against Seunghee.

At the end of the episode, Lee Soo Geun praised the Oh My Girl member by saying, “Seunghee did such a good job.”

Oh My Girl
Seunghee (Oh My Girl)
Unexpected Q
How does this article make you feel?