On the August 18 episode of tvN’s “Salty Tour,” BIGBANG’s Seungri joined the cast on a trip to Xiamen, China.

During the episode, Park Na Rae, who was in charge of planning their activities for the day, took the group to Xiamen University’s Furong Tunnel. When they arrived, there was a huge crowd in front of the tunnel, making it impossible for the cast and crew to film there, and Park Na Rae became flustered as she found herself at a complete loss for what to do. She admitted, “I didn’t know what to say [to the others]. It was hot and humid, and there were so many people, so I became frustrated as well.”

However, Seungri quickly came to the rescue and helped Park Na Rae during her unexpected crisis. Acting as a member of the crew, he personally asked the people in and around the tunnel for permission to film. Thanks to Seungri, they were able to smoothly wrap up their filming at the tunnel, and Park Na Rae commented, “I felt so sorry and grateful [to Seungri] at the same time.”

Later that night, the group headed to a local pub near their hotel. While they were enjoying their drinks, a few guys approached Seungri, and to his surprise, they were his friends who lived in Xiamen. Dazed and surprised, the idol said, “I really didn’t know [they were here]. I was shocked to run into my friends. My friends run a club and a restaurant. I didn’t know they owned this pub, too.” 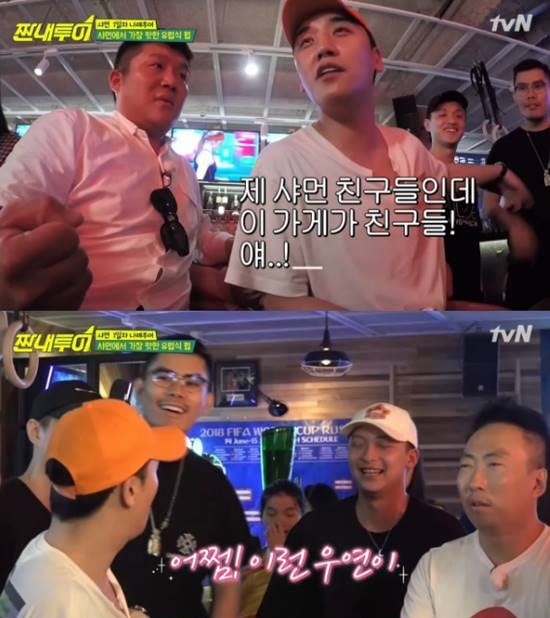 Seungri then caught his friends off-guard by asking the prices of the items on the menu. He explained, “I’ve never asked about prices before.” Thanks to the generosity of Seungri’s friends, the cast ended up enjoying some small but meaningful free services.