A new family has joined KBS 2TV’s “The Return of Superman”!

On August 19, Park Joo Ho and his family made their first appearance on the reality show.

Park Joo Ho is a professional soccer player who competed in the 2018 FIFA World Cup as a member of the national Korean soccer team. He played in the match against Sweden, but left the game due to a hamstring rupture. He was also previously a member of FC Basel from 2011 to 2013, which is when he met his wife Anna, and currently plays for Ulsan Hyundai FC.

He explained, “Anna was a part-time worker at the cafe inside of the soccer stadium. I first met her on the plane and ran into her again. We both thought, ‘Oh?’ and we became friends. One day, Anna asked me if we were just friends or if I thought of her as a potential girlfriend. It made me think about our relationship and we started dating. After many twists and turns, Na Eun was suddenly created.”

Na Eun was born in 2015 and is currently four years old by Korean reckoning. She has a younger brother named Geon Hoo who was born last year. 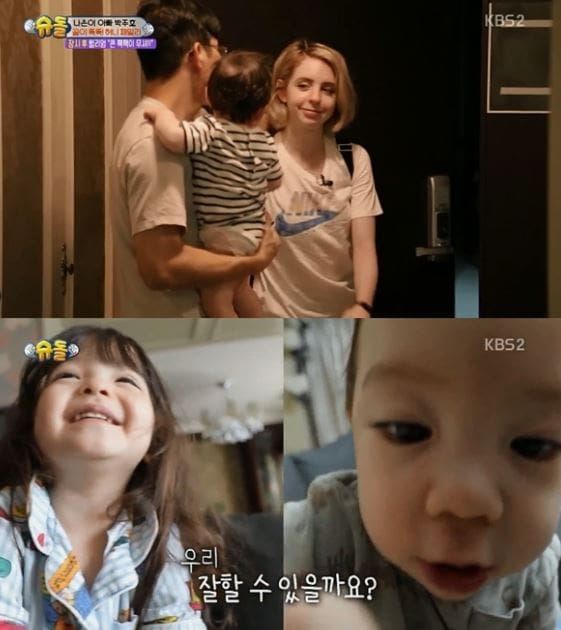 Explaining why he joined the show, he said, “Anna got married to me at the young age of 23 and lived in a foreign country alone [without friends and family], so it was probably hard for her. I want to give my wife a break.”

His daughter Na Eun stole the hearts of many viewers with her adorable appearance and knowledge of four languages — English, Korean, Spanish, and German.

Na Eun’s friendly personality and top-notch cuteness were visible throughout the episode when she interacted with her younger brother and the cameramen.

Check out a video of Park Joo Ho’s family and Na Eun demonstrating her language skills below.

“The Return of Superman” airs on Sundays at 4:50 p.m. KST. Watch an episode now!

The Return of Superman
Park Joo Ho
How does this article make you feel?