After news earlier this month about the drama “Four Sons” resuming filming with a new director, lead actress Nana is making moves to withdraw from the show.

According to a report by Edaily, Nana’s side sent the drama production company, Victory Contents, a notice regarding the termination of her contract, citing the suspension of filming among other issues.

A source from Pledis confirmed that this is true, saying, “Nana’s contract with Victory Contents, with the notice, has been lawfully terminated. We will let you know once everything is sorted with our legal representatives.”

However, Victory Contents has said that this isn’t the case, and that the one-sided termination of the contract is illegal. The production company said in an official press release, “First, we’d like to thank all of the actors and staff of ‘Four Sons’ who are cooperating with the filming of the drama, which is scheduled to begin on August 27.

“We’ve done everything we can for the coming filming of ‘Four Sons,’ including issuing drama appearance fees and engaging in continued negotiations with Nana’s agency regarding filming.

“The contract that Nana signed ends when the 16 episodes of ‘Four Sons’ all air, and Nana’s one-sided statement [about the termination of her contract] has no power to lawfully end her contract at this moment in time.

“We hope Nana, as the lead actress of ‘Four Sons,’ will take responsibility and faithfully participate in the table reading on August 25 as well as the filming that will begin on August 27 and wrap around the end of October.” 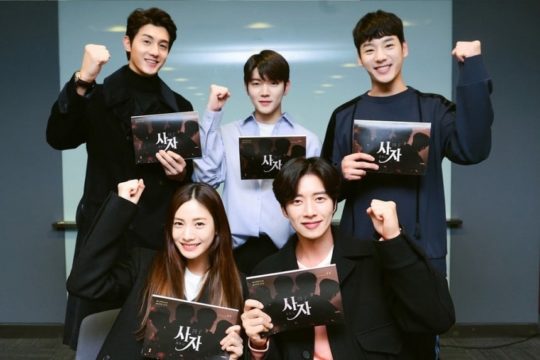 “Four Sons” is a fantasy romance drama starring Park Hae Jin, Nana, Lee Ki Woo, and Kwak Si Yang, and started filming in January, but came to a halt in early May. According to producing director Jang Tae Yoo, production came to a halt due to defaults on payments to both him and the drama staff, while Victory Contents claimed that PD Jang Tae Yoo went too far over budget. In July, Actor Kim Chang Wan also stepped down from the drama.

In order to prevent the situation from being drawn out further, Victory Contents changed directors, putting the drama in the hands of PD Kim Jae Hong and scheduling filming to resume at the end of this month. However, according to some staff members, the payment issues have yet to be resolved.

Nana
Four Sons
How does this article make you feel?