August 23 on XtvN’s “Super TV 2,” Super Junior’s Ryeowook, who recently completed his military service, wrote letters to each of the members.

While they were moved, the members also couldn’t hold back their laughter because Ryeowook began each of the letters with sweet sentiment, but ended by asking a favor of each of the members.

Ryeowook asked Kim Heechul to introduce him to girl groups, Eunhyuk to style his clothes, Shindong for a social media video, and Donghae to cry in celebration of his return.

Donghae read his letter from Ryeowook out loud:

“To Donghae, whom I love.

“We both met when we were young, 19 and 20. I wasn’t very cool, but you were really good-looking and like a real idol. We’re already 30, isn’t that crazy?

“You’re rising as a variety star on ‘Super TV.’ You’re doing really great. With that said, I have a wish.

“Cry some celebratory tears for me. Like a waterfall.”

At this point in the letter, everyone started laughing, and Ryeowook got teary-eyed. 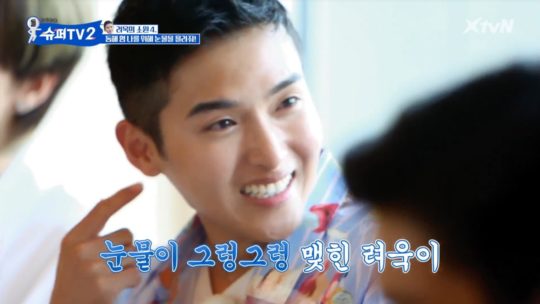 Donghae continued reading, “I really really love you. Let us not change and be [good friends] forever. I’ll make an effort, too. I hope you know that I really really care for you. And the dinner you bought me the other day was really good.”

At the end of the letter, Ryeowook and Donghae both were moved to tears, and Donghae said, “Ryeowook, really, this is so moving. Thank you so much. Really.” 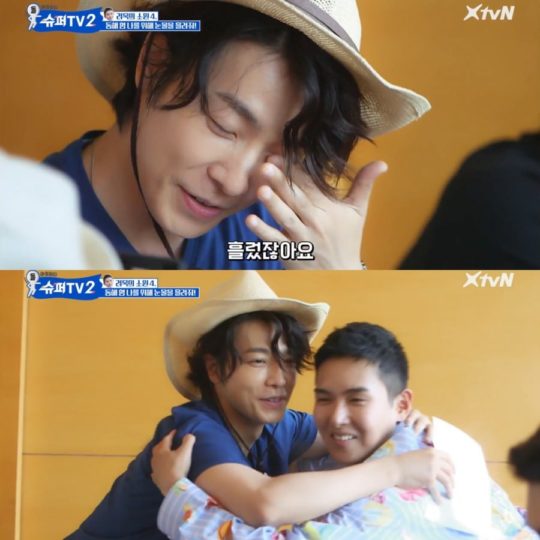 The group then hit up an arcade for a 199-second relay challenge. Each of the members took up a stations at an arcade game, with the final stop being the photo booth.

Watch Super Junior’s two attempts at the 199-second challenge and Leeteuk giving Ryeowook some expert tips on using a toy rifle below!

Donghae
Ryeowook
Super TV 2
How does this article make you feel?