Ryu Hwayoung has spoken up about the truth behind her relationship with LJ.

The idol-turned-actress was recently swept up in dating rumors with 41-year-old entertainer LJ after he posted several photos of them together on Instagram. The photos showed LJ and Ryu Hwayoung sharing meals and going on vacation together, and LJ later referred to the former T-ara member as his girlfriend in comments that he left on his own posts. However, on August 23, Ryu Hwayoung’s agency officially denied that the two were dating.

On August 24, Ryu Hwayoung sat down for an interview to personally respond to LJ’s claims and tell her own side of the story. She reported that they had not dated for two years, as LJ had asserted, but that they had been involved in an extremely brief and abusive relationship from which she had been trying to escape for the past two months.

“It’s been approximately one year since I actually got to know LJ,” said Ryu Hwayoung. “He was so good to me that I asked him if he had feelings for me, and he said no, so I thought he was treating me like a younger sister.”

“However, about two months ago,” she continued, “he confessed his [romantic] feelings for me. Because I felt that he had been sincere in his actions over the past year, I became interested in him for only his heart and mind, not his outward appearance, and I spent some time seriously considering our relationship.”

According to Ryu Hwayoung, it only took about a week for her to realize that LJ was not what he had seemed. “Not long afterwards,” she said, “due to the violent tendencies and excessively possessive nature that he had been hiding up until then, I decided that it wasn’t a good idea for us to become lovers. Within a week, I asked him to return to just being acquaintances.”

She went on, “I tried to console him and made an effort to remain on good terms with him, but every time [I tried to end things], he would stop eating and drinking, or he would threaten to commit suicide. In the end, he began threatening that he would call reporters and have them write stories [about our relationship]. He even showed up at my house without permission.”

Ryu Hwayoung explained that even though both she and her twin sister Ryu Hyoyoung had attempted to talk him out of his anger, they had found him stubborn and uncooperative. “For about two months, I cautiously tried breaking up with him, comforting him, and even getting angry with him,” she recalled. “But every time, he would respond by giving me gifts that I didn’t want or by forcing me to go to meals with his friends or acquaintances. He used the fact that I was a public figure to force me into a disadvantageous situation.”

She added, “LJ told the managers at my agency that he had more evidence [of our relationship] and sent them threatening texts saying, ‘I’ll stop if you publicly announce that Hwayoung and I dated for two years.’ However, it’s only been a year since we became close, and it was only a week that I actually had romantic interest in him. After that, I was dragged around against my will for two months.

“Because I didn’t want to be dragged around any longer, I spoke to him firmly about our relationship in the early hours of the morning on August 22. However, as usual, he responded with violence. Not only that, but he took away my cell phone by force and entered my house without permission, so I had no choice but to scream and defend myself.

“One by one, people began to gather, and the police eventually arrived and sent him home after trying to calm him down. However, the very next day, he posted those photos [of us] on Instagram.” 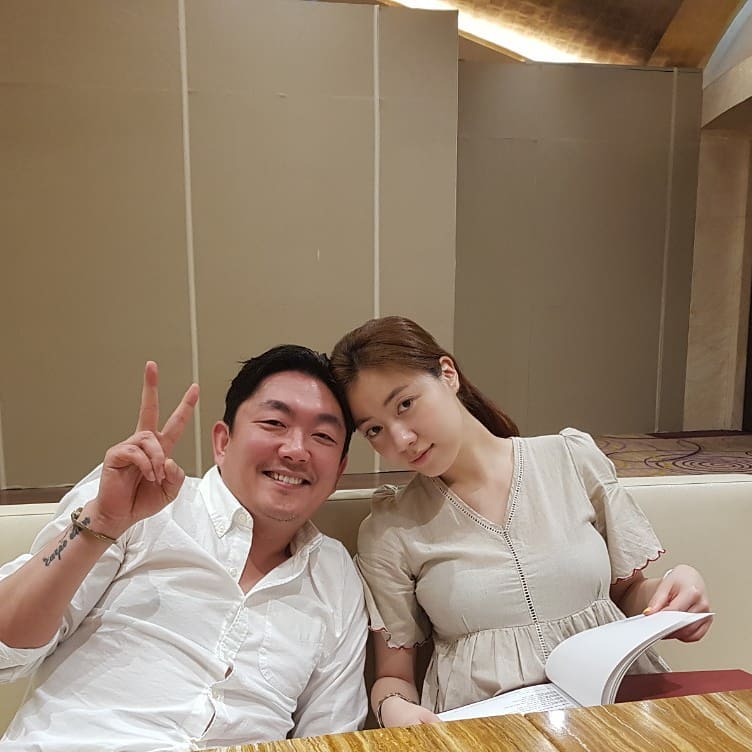 When asked to specify what kind of gifts LJ had given her against her will, Ryu Hwayoung replied, “He recently received a TV as a gift from the head of his agency. So he suddenly sent the used TV that he had been using up until then to my house. It seemed weird to accept it, so I sent it back to him.”

Explaining why she had decided to speak up, the actress remarked, “Because [LJ] was someone who was once a good friend of mine, I wanted to end things smoothly. But the situation has gotten out of hand due to his one-sided lies and exaggerations, and it has now become a great shock not only to me, but also to my parents. In order to protect myself, I thought that I needed to publicly announce the precise truth.”

She continued, “I spent countless days crying alone and trembling in fear because of his selfish, inconsiderate love and his threats. However, in spite of that, I have worked up the courage to publicly announce the truth so that, as a woman, I am not unduly mistreated.”

Ryu Hwayoung also addressed the fact that she had initially denied their romantic involvement, commenting, “I’m afraid that people won’t understand why I didn’t want to publicly reveal my brief relationship with a person that I found so terrifying that I considered him abnormal. But I’m putting my life on the line and mustering the courage [to tell the truth]. I won’t suffer in silence anymore.”

She went on to reveal that she was seriously considering taking legal action against LJ. “I’m discussing a strong legal response,” she said. “As a victim of dating violence, I hope that this kind of thing never happens again.”