BTS has taken No. 1 on all of Korea’s major realtime charts with their new track!

Shortly after its release, the song soared to No. 1 on many of Korea’s realtime charts. By 8 p.m. KST, it’s already taken first place on all six of the major realtime charts: Melon, Genie, Bugs, Mnet, Naver, and Soribada. 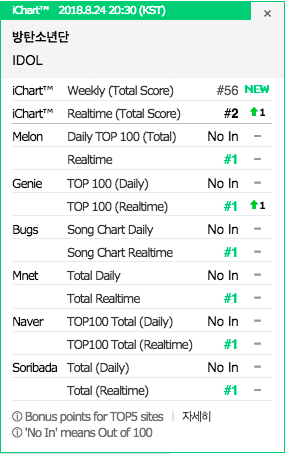 Other tracks on “Love Yourself: Answer” are also ranking high on the charts, including “Euphoria” at No. 2 and “I’m Fine” at No. 3 on Korea’s largest music site Melon.