A Mesmerizing Fantasy World: 3 Reasons To Watch “Ashes Of Love”

Step into the fantasy world of “Ashes of Love”! Based on a popular novel, this C-drama depicts the tale of Jin Mi (Yang Zi), the daughter of the Flower Deity, Zi Fen. Before she dies, Zi Fen foresees her daughter going through tribulations because of love. In an attempt to prevent this, she gives Jin Mi a pill that causes her to become incapable of feeling love.

The drama flashes forward to a grown-up Jin Mi, who encounters and saves a bird that crashes into the Floral Realm. Unknowingly, Jin Mi ends up saving Xu Feng (Deng Lun), the Fire Immortal and son to the Heavenly Emperor, who is in the midst of reincarnating before being attacked by a mysterious figure. Despite the countermeasures made by Zi Fen, Jin Mi’s quiet and safe life in the Floral Realm gets shaken.

The elaborate production of the sets and costumes

For those who are looking for a fantasy-based plot, xianxia dramas are a great genre to watch. If you’ve seen “Eternal Love: Ten Miles of Peach Blossoms,” this world might feel a bit familiar as it deals with people from the Heavenly Realm, Demonic Realm, etc. Of course, the depicted interpretations and relationships are different and stand out in their own way. The sets lean towards colorful schemes and extravagance, while the atmosphere and costumes evoke an ethereal vibe that is visually fitting for a fantasy drama.

Since the world is built to have magical creatures and magical beings, most of the sets are accompanied with CG, which can be a hit or a miss for viewers. However, considering the drama’s limited budget, the graphics effectively portray the beauty of the various realms and will really draw you into the drama’s world.

The first 10 minutes of the drama start off gloomy with Zi Fen’s tragic heartbreak and death, but once the drama moves forward with a grown up Jin Mi, the tone livens up. Since Jin Mi has been sheltered from the outside world for her own good, she is naive about many common things, such as males. During her first meeting with Xu Feng, who is in his bird form at the time, she attempts to cook him. When he transforms into his human form, she almost chops off his nether region — being completely unaware of bodily differences.

Watching Jin Mi’s obliviousness to the most basic of situations provides much laughter and makes for the cutest interactions with Xu Feng. Xu Feng gets flustered by their interactions, which reveal a side of him that we don’t usually see. Unfortunately for him, the magical pill that Jin Mi’s mother gave her at birth is still in effect, so while she does like him, she has no understanding of what love is. This creates a series of misinterpreted actions and lead to Xu Feng’s eventual attraction, as he does not fall for her for a good 100 or so years.

“Ashes of Love” contains plenty of subplots to unravel. There’s Jin Mi’s unawareness of her parentage, the stories behind Zi Fen’s heartbreak, people plotting to get rid of Xu Feng, the hostility between the Heavenly Empress and her stepson Run Yu, as well as the love trial that Zi Fen foresaw for her daughter.

The genre allows for a wide array of characters with great backstories, which is a great plus. As much as it’s great to see the main leads interact every episode, considering the episode count, the flow and storyline receives a boost from the multiple characters that are introduced. In particular, Run Yu is an interesting one to notice. Despite being the oldest son of the Heavenly Emperor, he isn’t treated as well as Xu Feng. However, the two brothers have not let the negativity surrounding them tear apart their brotherhood.

This drama has made an incredibly good first impression by building a solid world with fascinating immortals and conflicts. While the drama is bound to spin into a tragic storyline, its light-heartedness during the beginning stages exudes the sweetness of a naive girl experiencing a whole new world and the hardships of love. 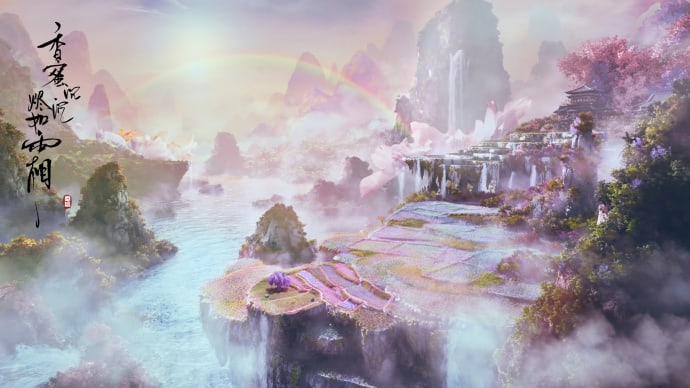 Enter the fantasy world below! Click now to watch the series.

Soompi Spotlight
Deng Lun
Ashes of Love
Yang Zi
How does this article make you feel?