Shinhwa spoke about their team’s longevity and gave some words of advice to younger idols.

On August 28, Shinhwa attended a press conference for their 20th-anniversary special album “Heart.”

The group’s leader Eric Mun began, “We’ve promoted together for 20 years since our debut. I’m filled with emotion. Thank you so much to my members, fans, and staff. It’s been 20 years, but it’s a really grateful thing to be able to release an album. I’m proud of my members.”

Shin Hye Sung added, “20 years have passed, but my heart still flutters and I still get excited and nervous. Because of that, we named our album ‘Heart.'”

Describing their title track, “Kiss Me Like That,” Minwoo said, “We carefully decided on it. Shinhwa cannot leave out the performance [aspect], so we always keep that in mind when selecting the title track. For this title track, I thought about doing something that hasn’t been done before and a performance that only Shinhwa can do. I have more affection for the track after recording and while filming the MV than when I first received it.”

He continued, “This song has a sexy concept. It has an added acoustic sound, so you can subtly feel the sexiness.”

Kim Dong Wan explained, “During a concert, there are instances when you need time. In order to not make it feel boring, we did a good job of making performance clips for the audience. The clip continues from the previous concert. We filmed it with an ‘insane’ concept. I think the audience will enjoy watching it.” 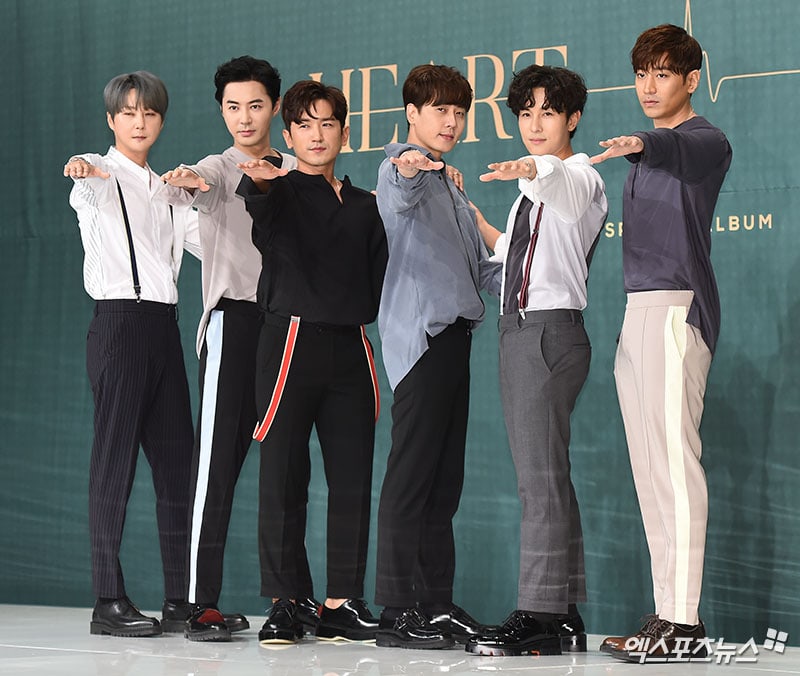 Shinhwa will be holding a concert around the same time as H.O.T. and SECHSKIES, two groups that they promoted with in the past.

About this, Minwoo commented, “Shinhwa has always continued to promote. I was happy to hear that other groups that we used to promote with were also holding concerts.”

He continued, “I saw H.O.T. eating a meal together at a restaurant and they were full of affection. It made me think that they were a lot like us. I thought that it’d be nice if they had a concert. We were in the same agency as H.O.T. so it’s something I want to applaud them for.”

Shinhwa members then spoke about the secret to their longevity. Andy said, “We are generous and understanding of one another. We trust one another and have naturally been together like a family for 20 years. In the past, I answered that we were like a family to this kind of question as well. What I can say to the junior artists is to trust one another. The more you talk about personal things, the closer you will become. It’s the secret to lasting for a long time.”

He added, “To be honest, there isn’t a secret. If there was, then anyone could follow that and last for a long time.”

Shinhwa released their 20th-anniversary special album “Heart” and title track “Kiss Me Like That” on August 28. The group will have their comeback stage at Mnet’s “M!Countdown” on August 30.

Shinhwa
XPN
How does this article make you feel?