A Guide To Major Cultural Events In Korea

K-pop, K-dramas, K-beauty are the three major pillars of Korean culture that most of us are familiar with and perhaps what sucked us into the vortex (face it, its inescapable) in the first place. But with its rich historical and cultural fabric, Korea has much more to offer. If you are planning a trip to Korea or are simply interested in delving deeper beyond the surface, here’s a handy guide to some of the cultural highlights Korea plays host to. Whether traditional or modern, there’s something for everyone! 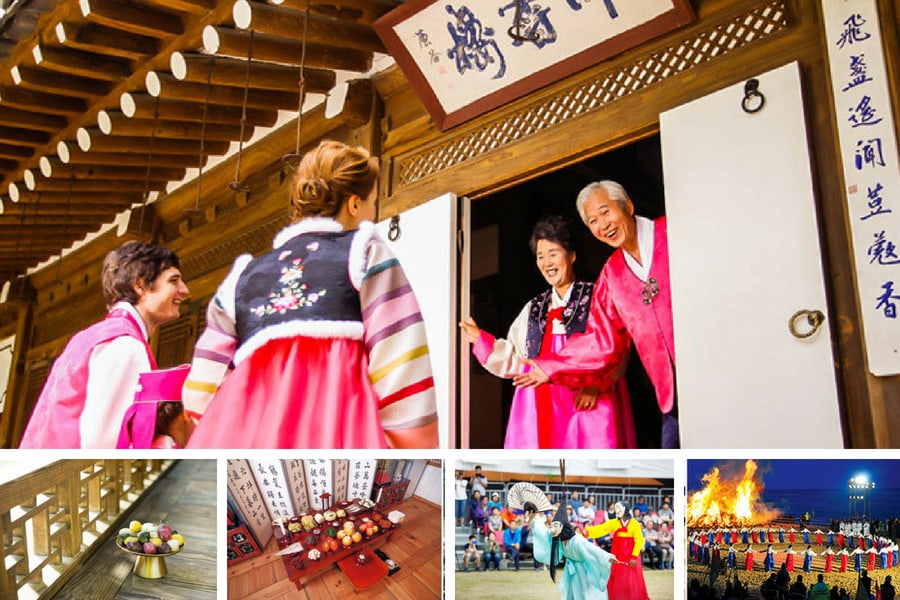 Known as Korean Thanksgiving Day, Chuseok is one of the biggest harvest festivals in Korea and typically coincides with the autumn equinox. This year, Chuseok falls on September 24 and will be celebrated across three days from September 23 to 26.

Aside from celebrating a season of bountiful harvests, Chuseok is also a time for family reunions, as Koreans often travel back to their hometowns during this period. On the morning of Chuseok, families don their traditional attire (hanbok) and hold memorial services for their ancestors, after which they gather for a yummy feast. And for the record, it ain’t a proper Chuseok feast until these staples take a turn on the dining table: Korean rice cakes (songpyeon), Korean pancakes (jeon), and Korean pears!

With your bellies full, here comes a different kind of feast — one for your senses. The celebration of Chuseok would not be complete without traditional Korean folk entertainment. Mask dances (talchum), Korean circle dances (ganggangsullae), and Korean wrestling (ssireum) are some of the popular options for Koreans, young and old, to indulge in. 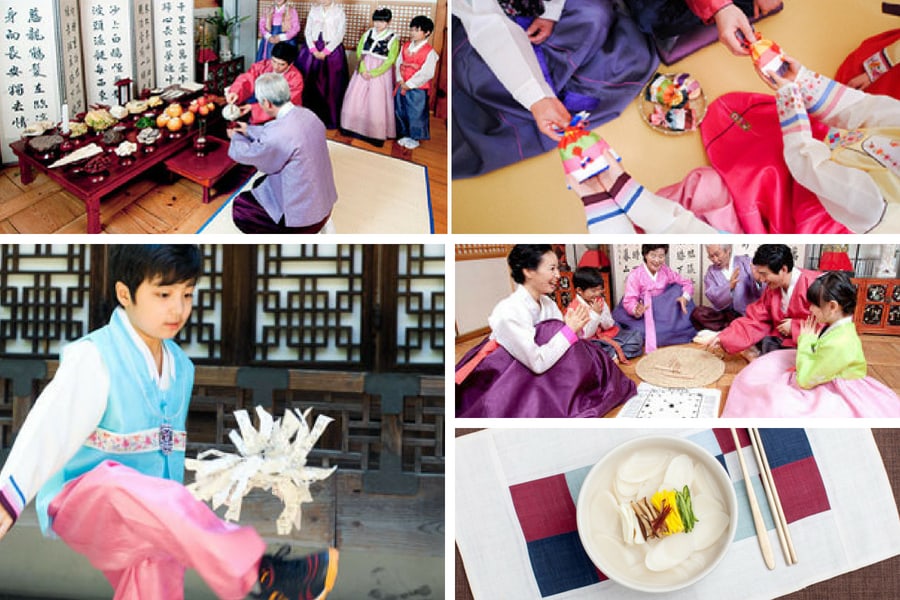 Seollal is another one of Korea’s most important holidays as it is the Korean New Year. Celebrated on the first day of the lunar calendar, Seollal took place on February 16 this year.

During Seollal, Koreans pay respects to their ancestors and spend time with their families. All in their favorite piece of traditional hanbok attire, of course! Fun fact: Special hanboks (seolbim) are worn on Seollal. These are in brighter and more colorful hues than normal hanboks so as to usher in good luck.

Hanbok isn’t the only thing that takes on special significance on Seollal though. The food served during the New Year feast also comes laced with cultural meaning. Enjoying a bowl of tteokguk, a traditional soup made with sliced rice cakes and other ingredients, on Seollal is believed to add a year to your age.

And once everyone is unofficially one year older, the younger generations in the family take their turns performing a deep bow (sebae) to their elders as a mark of respect. The elders return the goodwill by offering blessings and a little gift in the form of New Year’s money (sebaetdon).

Good food and goodwill — check! What’s next? Good fun of course. Korean board games like yutnori and Korean hacky sack (jegichagi) are some of the fun traditional games that families bond over. 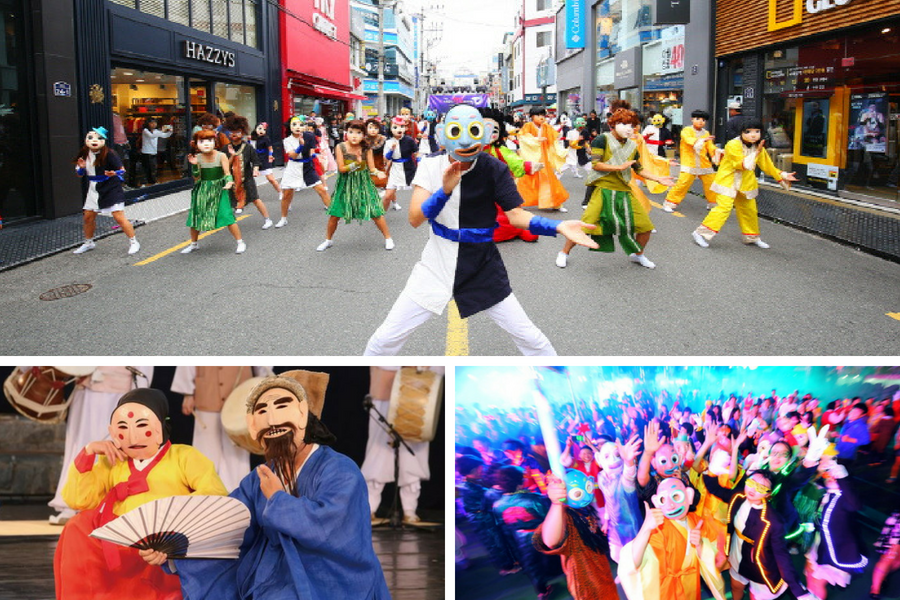 Fans of “King of Mask Singer,” where you at! From unicorns to bumblebees, you must have thought you’ve seen them all. But here comes the Andong Mask Dance Festival to show you what you’ve been missing out on.

Running from September 28 to October 7 for this year, the festival is held in the city of Andong, which is famed for the Korean traditional culture of masks and mask dances. These mask dances are steeped in cultural meaning with each transporting you across time and geography with their clever delivery of classic Korean folktales.

If you would like to participate in the festival somehow, why not make your own contribution to the World Creative Mask contest? Get your creative juices flowing and start crafting! 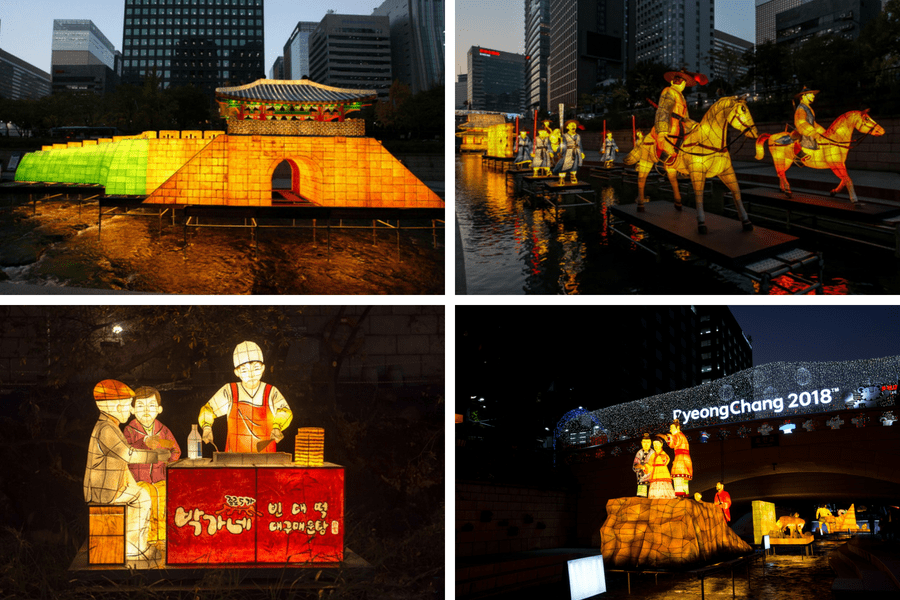 While most of us would have seen lanterns before, the lighting feature takes on a larger-than-life form during the annual Seoul Lantern Festival. This year, the event will take place from November 2 to November 18 along the 1.3-kilometer (or 0.8-mile) stretch of Cheonggyecheon Stream.

Not just pretty to look at (and take pictures of), these lanterns are also created with different themes in mind. From the first theme of “Start of a New Dream” to the last “Seoul, Flowing with Tradition,” Seoul Lantern Festival would be quite a highlight to any Seoul trip, wouldn’t you say? 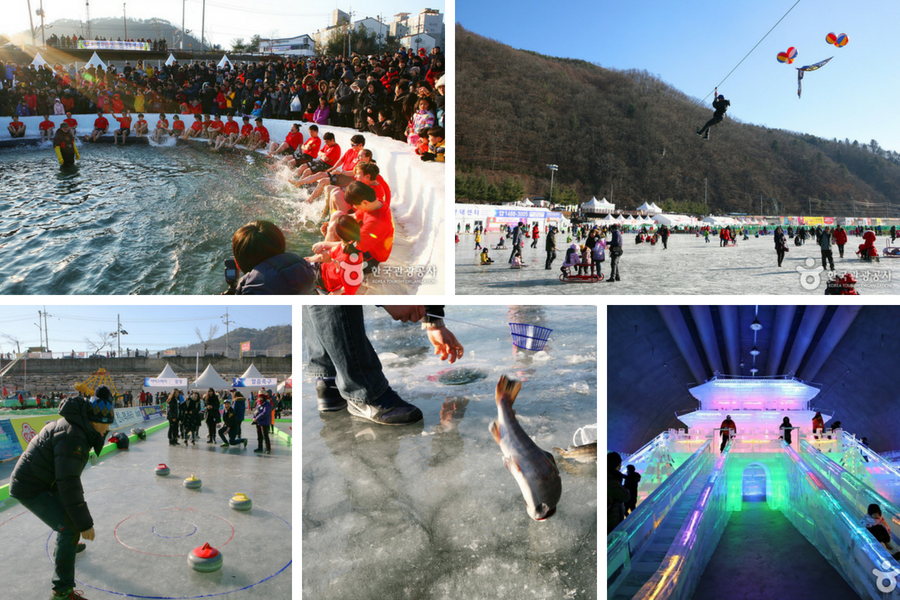 If you’re into winter activities and sports, our pick for a perfect winter wonderland would have to be Hwacheon Sancheoneo Ice Festival in Gangwon. Since its inception in 2003, the festival has been drawing crowds for its wide array of winter activities ranging from bobsledding to ice-fishing.

Not a fan of tussling in the snow? Hwacheon Sancheoneo Ice Festival has got you covered with a string of lively street performances, an indoor ice sculpture square, and other attractions that allow you to enjoy winter in all its glory — from a safe frost-free distance.

The festival will be held from January 5 to January 27 next year, so make sure to mark your calendars Soompiers! 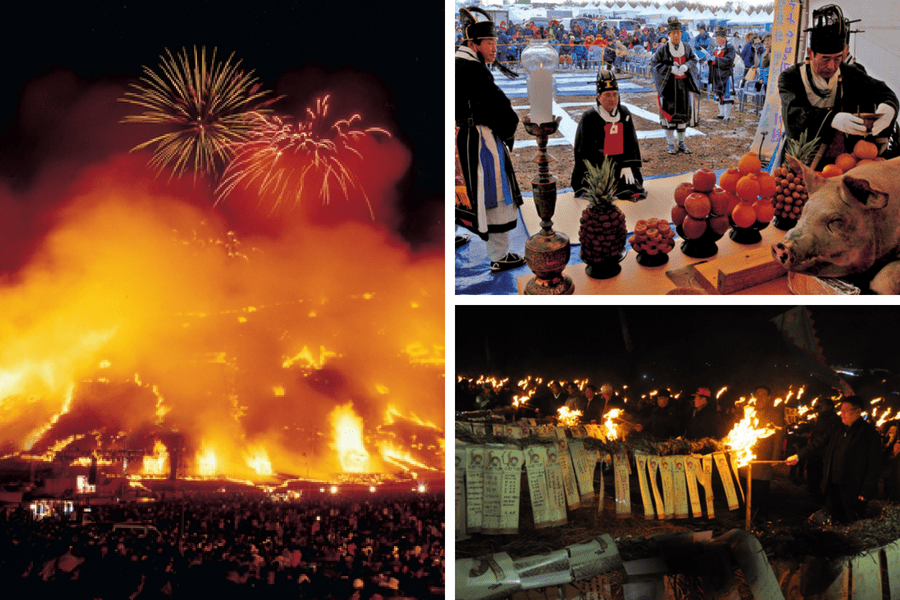 Famed for its clean and green environment, Jeju undergoes a cleansing of sorts every year as a part of an old pastoral culture known as banggae. This year, the festival was staged across the first four days of March.

Commemorated by setting fire to the surrounding grasslands, Jeju Fire Festival enthralls visitors annually with its fiery display of rejuvenation. Apart from the fire-works, visitors can also try their hand at folk games and hands-on activities like field fire flying kite and oreum hiking. In keeping with the theme of fire, the festival also caters to foodies with its offering of grilled regional specialities such as black pork skewers. 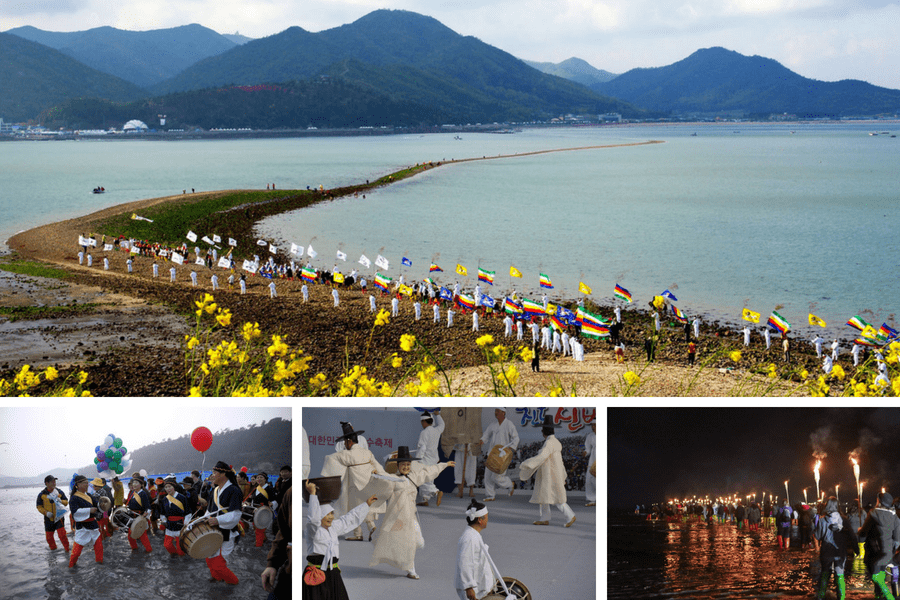 A modern-day “Miracle of Moses,” the Jindo Miracle Sea Road Festival is marked by a curious phenomenon. Once a year, the sea at Jindo Island mysteriously parts due to extremely low-tide and reveals a path that visitors can take to travel from the main island to a smaller island nearby.

Leisurely stroll aside, visitors can also experience the full Jindo Island package at various hands-on activities such as folk songs (Jindo arirang), poetry paintings, and more. If you’re in the mood to lift your spirits with them spirits, you will be pleased to know that one of the hands-on experience booths involves a regional alcoholic beverage, Jindo hongju! 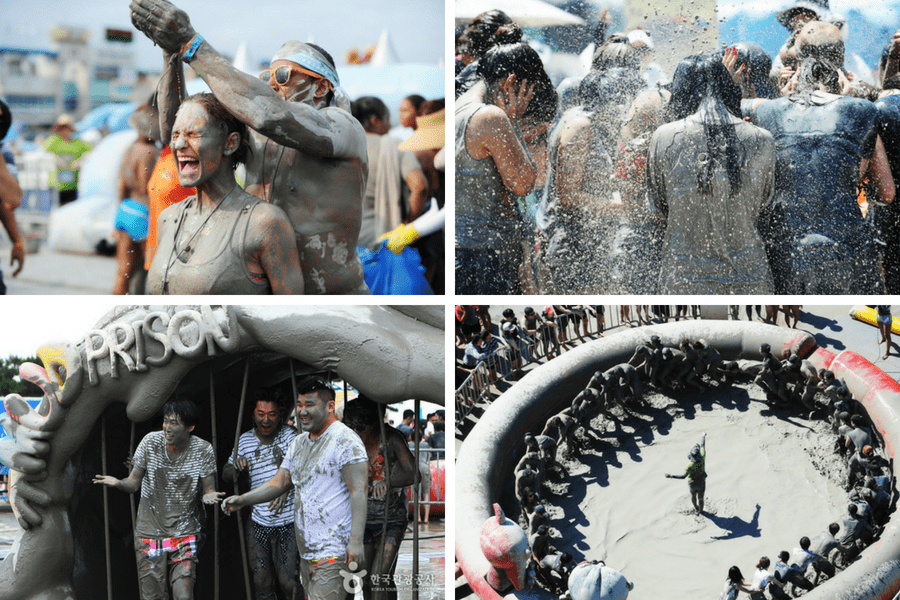 Summer is the perfect time to get down and dirty, and while the season might be drawing to a close this year, why not check out what Boryeong Mud Festival has up its (very muddy) sleeves for that 2019 trip?

By now, you might have gathered that Korea has a thing for festivals. And of all the festivals, this one takes pole position, as droves of international visitors descend upon Chungcheongnam every year to soak in mud. But not just any plain old mud though, the mud found at Boryeong mud flats is incredibly mineral-rich and believed to be beneficial for your skin.

With mud-sliding, mud baths, mud wrestling, and more on the menu, there are many options for you to have an impromptu facial while still having fun. This might also be one of those rare times you won’t have to split hairs over your “mask” slipping and dripping all over, score!

We’re celebrating Korean culture & language month here for our Soompi 20th year-long celebration! Tell us what you love about the Korean culture with #FromMeToYou! Find out more here.

Soompi Spotlight
seollal
Chuseok
How does this article make you feel?