BTS Talks About Wrapping Up “Love Yourself” Series, Their Solo Tracks, And “IDOL” Choreography

BTS shared stories behind their latest album “Love Yourself: Answer”!

On August 29, BTS held a V Live broadcast titled, “Bangtan News: Behind the Answer.” Jungkook said, “We have reached the finale with ‘Answer.’ We started in March 2016 and we concluded it after two years and five months. I feel proud and sad. We all tried our best, so I think we created a meaningful album. I hope ARMY feels the same way about the album.”

RM spoke about the “Love Yourself” tour that kicked off at the Seoul Olympic Stadium on August 25 and 26. “I think I was really excited on the first day,” said the BTS leader. “Thankfully, it didn’t rain and it ended successfully. ARMYs came with the fan chants memorized and sang along to the lyrics, so I enjoyed the concert without any time to be nervous. The energy of the concert still hasn’t gone away. ARMYs, you guys are the best.”

Describing his solo track “Trivia: Just Dance,” J-Hope said, “It’s a really fun song. I included the meaning that no matter what others say, I’m myself and I love myself. It sounds both Korean and global.”

Bringing up Jin’s performance for his solo track “Epiphany,” Jimin asked, “I’ve never seen you play the piano before. When did you practice?” Jin revealed that he learned the piano for the first time for the concert while practicing with one of the agency’s composers.

He said, “I also recorded a piano practice video. I began practicing two to three weeks before the concert.” Jimin added, “Jin said that he couldn’t pretend to play the piano to the fans.” 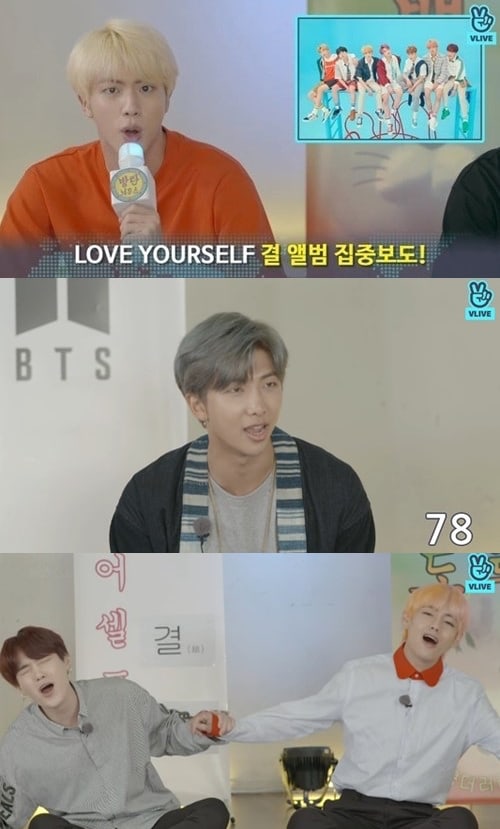 About his solo track “Serendipity,” Jimin said with a smile, “Khalid said he liked it this morning. The lyrics and emotions of the song feel fresh. It’s charming and sweet. I hope you’ll listen to it when you think of me.” He then showed the choreography and was joined by V and Jungkook.

RM described his solo track “Trivia: Love.” He said, “I included the beauty of the Korean language, and it’s a song for fan chants. I think it’ll be nice if everyone sang along.”

V said, “I wonder if ‘Singularity’ is the most dramatic song out of all of the members’ solo tracks. I showed a solo performance. Did it look cool?”

About his solo track “Trivia: Seesaw,” Suga explained, “I showed a part of me that I had kept hidden. After the album release, many people reacted by saying, ‘He’s good at singing.’ At the concert, people said, ‘He can dance.’ I wrote it while thinking about getting No. 1 on a music chart.” He then made everyone laugh by adding, “Right now, if I search for ‘Seesaw,’ my song doesn’t come up right away, so I’m unable to get No. 1.”

The broadcast then aired a behind-the-scenes video of BTS filming the MV for their latest title track “IDOL,” where fans got to see the colorful set and elaborate choreography. 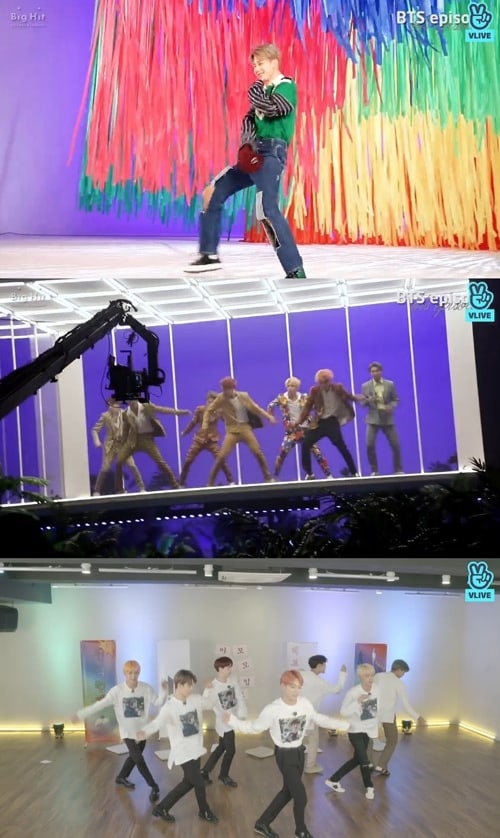 Suga commented, “I can say that this is our most difficult choreography.” Jin added, “I look forward to seeing how far BTS’s choreography will go.” Jimin said, “It’s a dance that uses up a lot of energy, so it made me wonder if performing this live would be possible. But isn’t it our duty to practice and make a live performance possible?”

V added, “The choreography this time is epic. I hope you’ll like it a lot.” Despite being busy on the set, the members gathered together to take selfies and had fun while filming.

V added, “We’ll be able to see you through music show promotions, so please wait a little. ARMY, I purple you.”

BTS ended the broadcast by dancing to “IDOL” together and said goodbye to their fans. Following a week of promoting their newest tracks on music shows, the group will be heading around the globe for their concert tour.