“The Evolution of Our Love” is the Chinese remake of the award-winning 2011 Taiwanese drama “In Time With You” starring Chen Bolin and Ariel Lin. Korea also has a remake of the drama called “The Time I Loved You” starring Ha Ji Won and Lee Jin Wook.

In this latest remake, Zhang Ruo Yun and Zhang Tian Ai respectively play Lu Fei and Ai Ruo Man, who have been best friends since their high school days. Ai Ruo Man (also known as Man Man) is a confident and successful career woman who has no luck when it comes to dating, while Lu Fei is a warm-hearted man who loves cooking and gardening, yet has no major career aspirations. Unlike his best friend, Lu Fei has many admirers, but he is not interested in dating or marriage. As Man Man and Lu Fei reach their 30s, they discover after many twists and turns that they are the best match for each other.

You’re probably wondering, why do we need another remake? For me, the long-time-friends-to-lovers trope feels like a classic story that never seems to get old. It’s a wonderful, slow burn type of drama, which might not be for everyone. The drama can also be described as a mellow and introspective slice of life drama. There are plenty of great scenes from “The Evolution of Our Love,” and here’s a list of my favorite moments that I wanted to share! 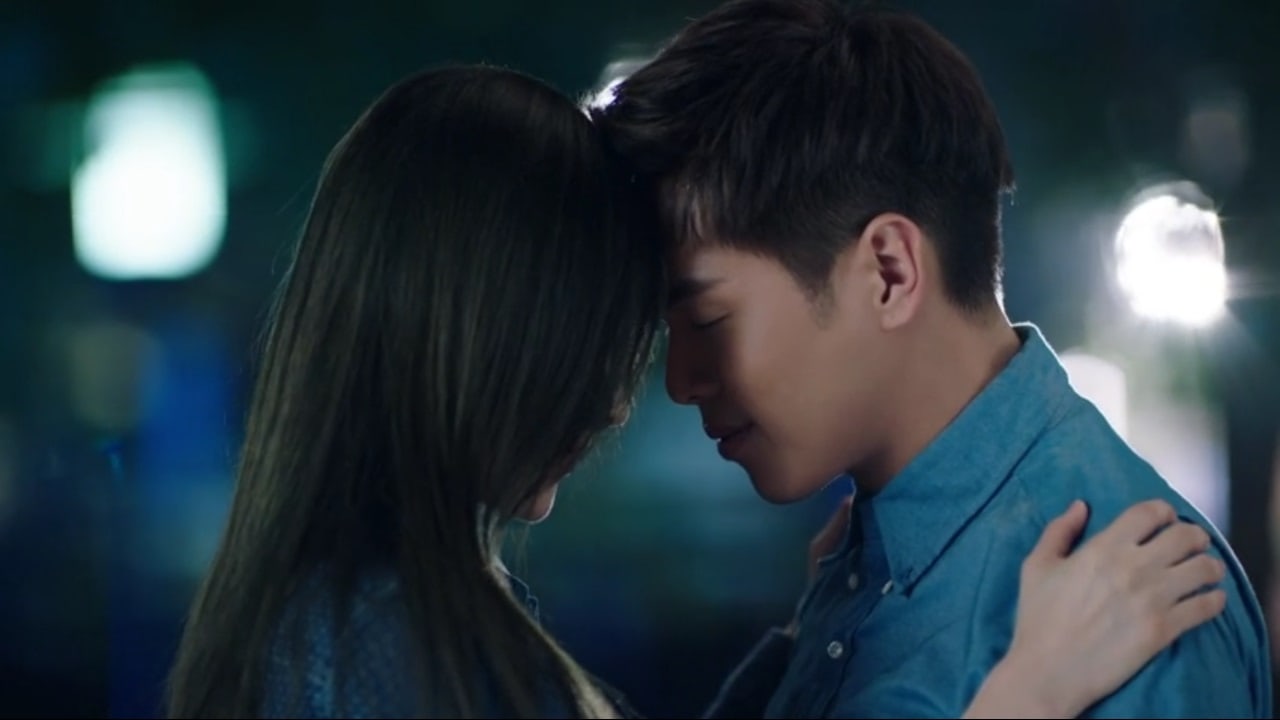 In this cute moment, Man Man tries to cheer up Lu Fei, who feels unhappy after turning down his co-worker Qing Qing (He Hong Shan) (who’s been actively pursuing him) because he hates hurting people’s feelings. When he pulls her in for a hug, Man Man decides she needs to give Lu Fei a “wireless charge,” which involves putting their foreheads against each other. Lu Fei immediately breaks into a smile from this gesture. This is one of my favorite scenes because it’s so sweet and touching to watch Lu Fei and Man Man being there to support and re-energize each other when they need it the most. 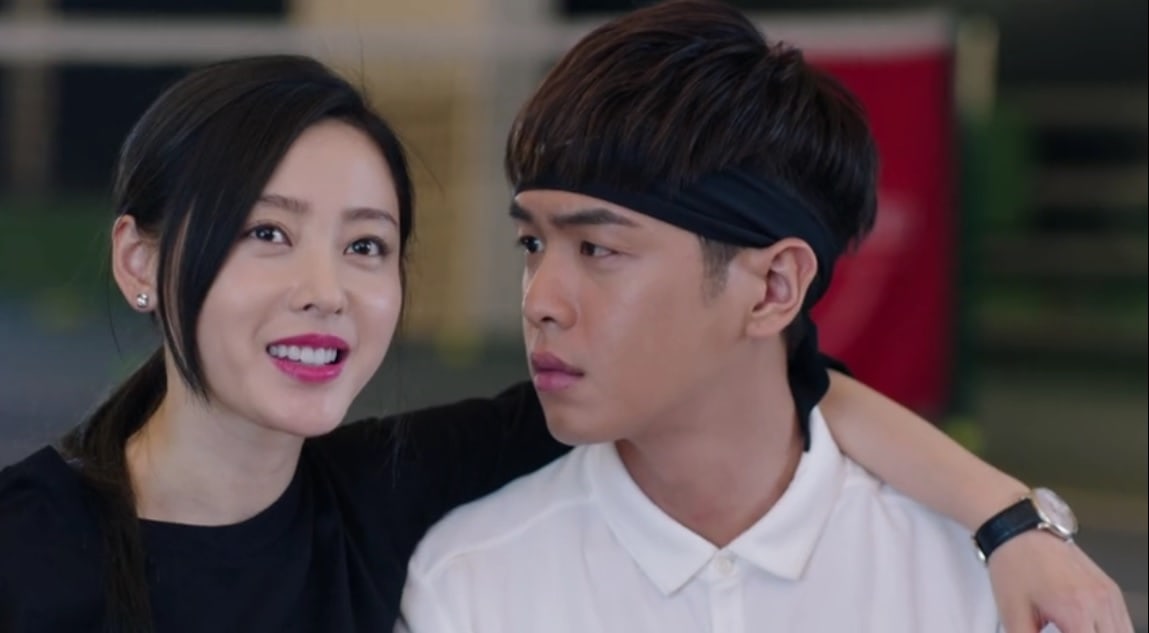 Shortly after Lu Fei breaks it off with Qing Qing, the crazy neurotic girl ends up filing a lawsuit against him. Feeling stressed about the whole ordeal, Lu Fei plays alone at a tennis court. When Man Man finds out about the situation, she rushes back from her business trip and comforts Lu Fei, saying that he doesn’t need to be so hard on himself. Changing up the subject, Man Man talks about love and how she thinks anything is possible when it comes to love. Without really thinking, Man Man exclaims the possibility, “I might even fall in love with you.” Touched by her words, Lu Fei leans in and plants a kiss on her cheek. It surprises the both of them, and Man Man shoves Lu Fei away and quickly leaves.

This is a monumental moment as Lu Fei has always been extremely passive with his feelings towards Man Man. It marks the beginning of a changing dynamic between our lifelong friends, and it really makes viewers like myself excited to see Lu Fei taking baby steps in pursuing Man Man. 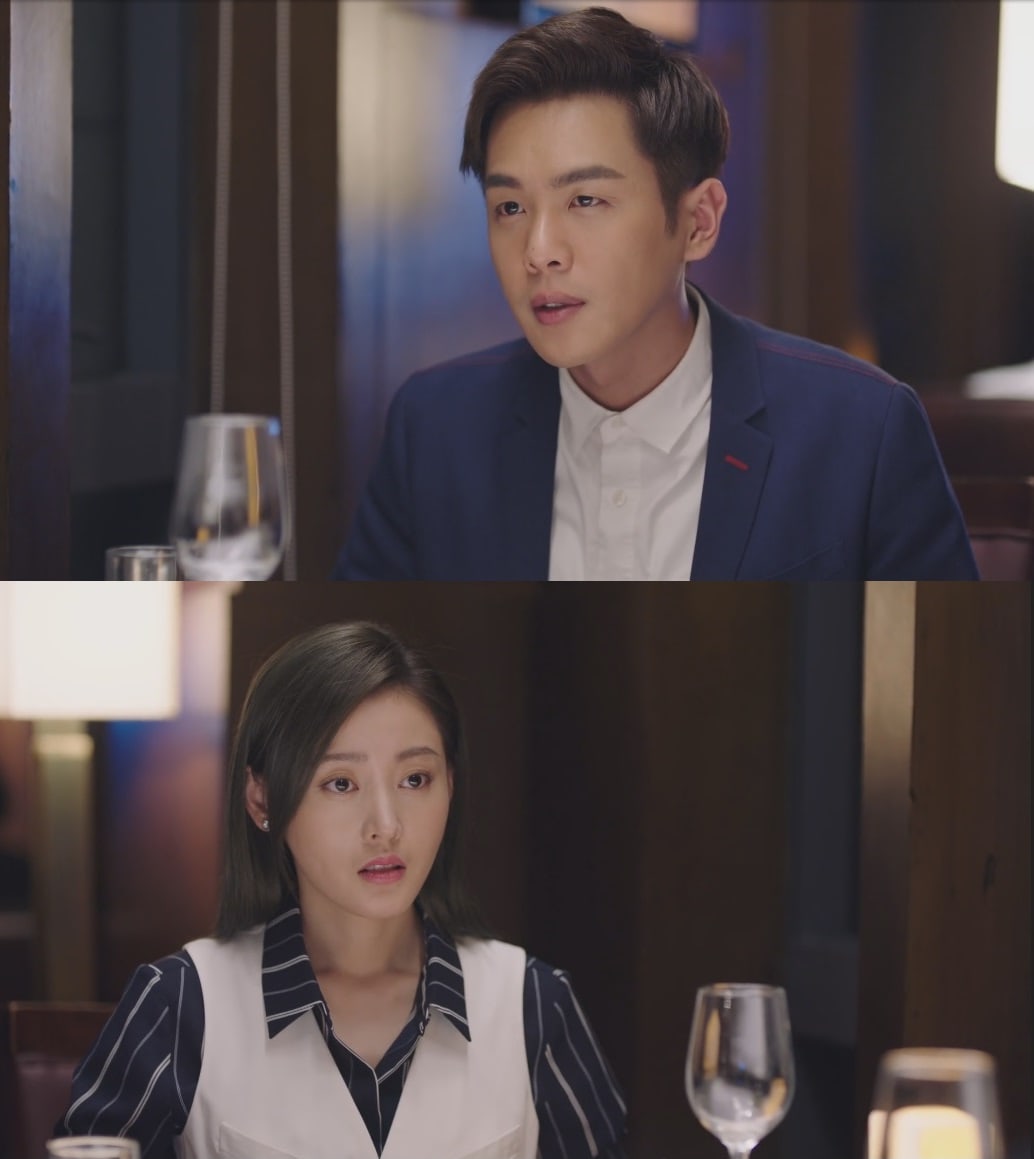 In this scene, our BFFs Lu Fei and Man Man are out for dinner, discussing the status of their friendship after the kiss on the cheek incident. Lu Fei apologizes, saying he was deeply touched by Man Man because he did not expect her to suddenly appear to comfort him at the tennis court. He explains that the kiss is a way of showing thanks, but also “a feeling of cherishing and a feeling of admiration… the admiration between a man and a woman.”

Man Man becomes shocked and quickly changes the subject, mentioning that she ran into Ding Yu Yang (Timmy Xu), her long time crush from high school. Man Man then asks Lu Fei what he means by his words. In an attempt to recover his composure, Lu Fei quickly says in defense, “It was only a brief moment of admiration, maybe it’s because I have very few people I can communicate with,” and assures that he didn’t fall in love with her, which is a relief to Man Man.

This scene really makes you feel for Lu Fei. I credit it to Zhang Ruo Yun’s phenomenal acting, since his expressive eyes always reveal so much of his inner thoughts and feelings. The look of heartbreak and disappointment in Lu Fei’s eyes really tore me up as he was trying to keep it together. It took such a big step to finally start expressing his true feelings towards Man Man, but in the end he had to cover it up due to the appearance of Ding Yu Yang.

Together in sickness and in health 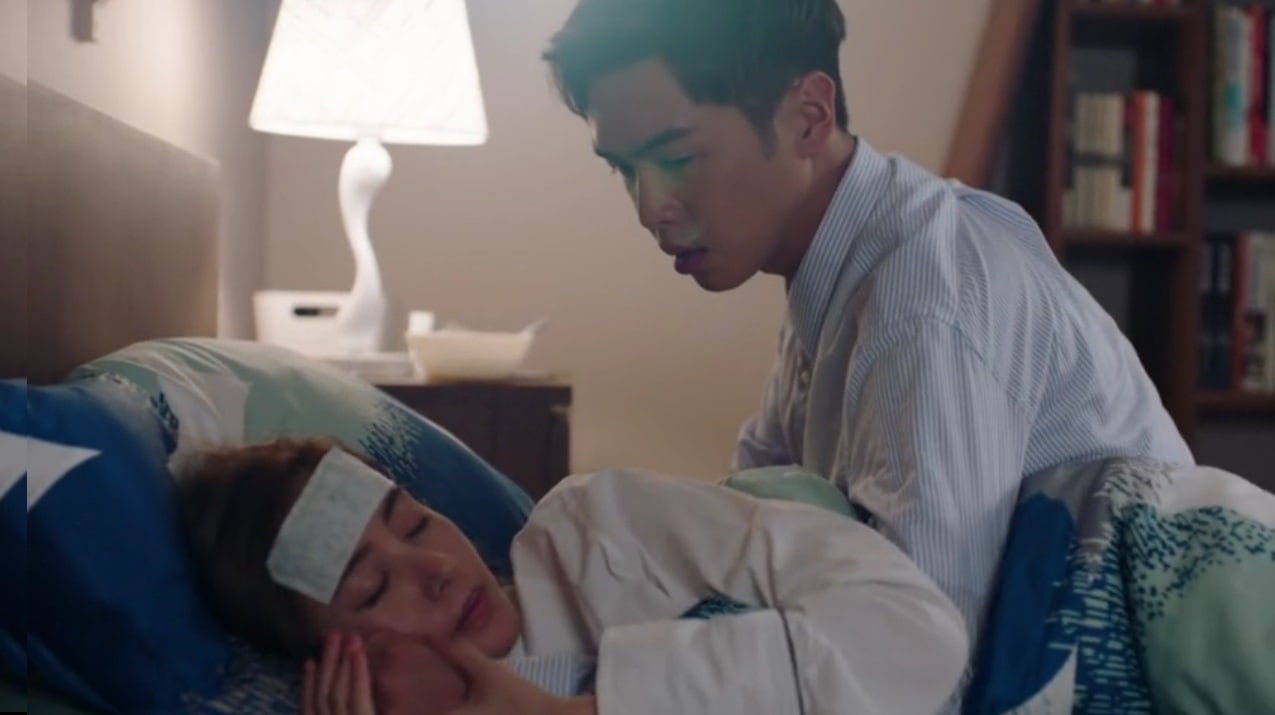 Several scenes later, our main not-yet-a-couple normalizes their friendship again. The workaholic Man Man falls sick one night after overworking herself on a project proposal for work. Instead of going home, she heads straight to Lu Fei’s house. Lu Fei takes care of Man Man, and while tucking her in bed, she grabs his hand and cups her own face with it. I love this scene because it demonstrates the high level of comfort and dependency that Lu Fei and Man Man have developed for each other. It’s the sweetest thing because Man Man doesn’t even need to think about it and goes to Lu Fei because she knows he’ll take care of her. And there’s no doubt Lu Fei would drop everything to help nurse her back to health. It’s also so funny and cute when Lu Fei’s cousin walks in on them and snaps a photo for evidence. She’s the biggest shipper of our OTP. 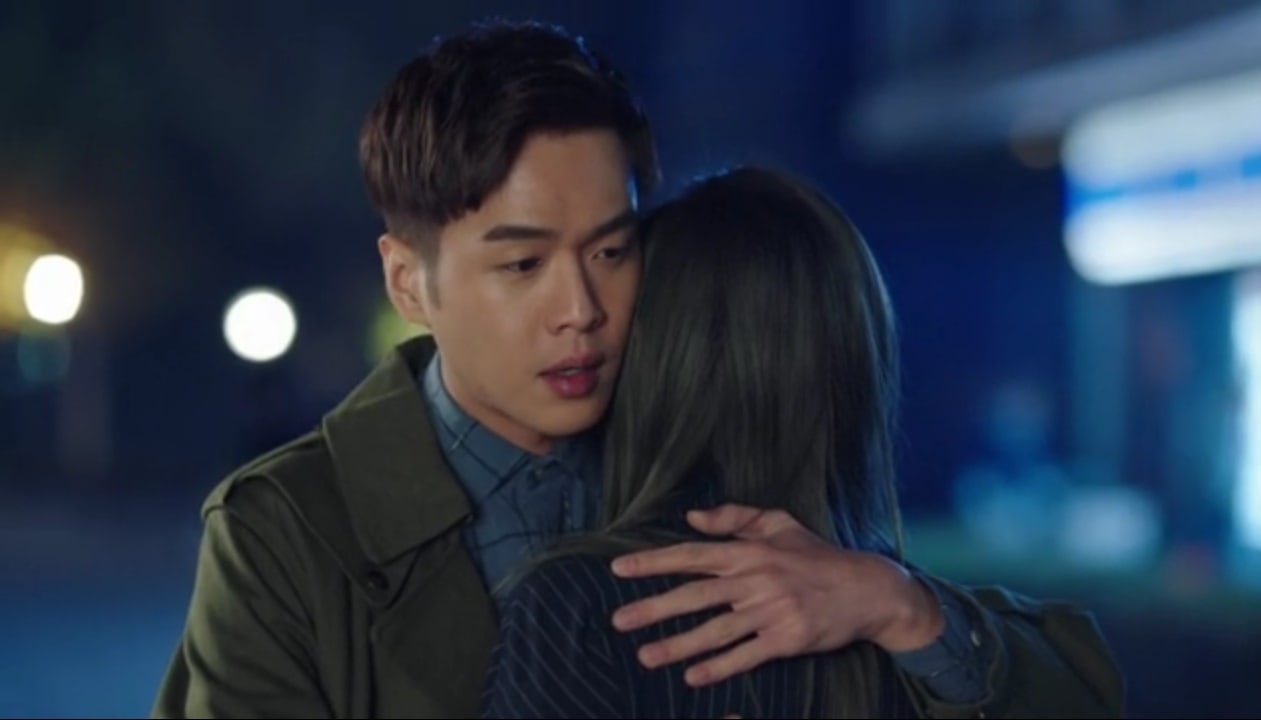 During episode 22, Man Man gets upset at her parents because they are against her courting Ding Yu Yang. In response, Lu Fei pulls Man Man into a hug and says, “You’re great. You’re already outstanding. In my eyes, no one is good enough for you.” And when Man Man asks, “What about Ding Yu Yang? And you?” Lu Fei confirms that neither of them are good enough for her. Awwww, I’m pretty sure Man Man’s heart skipped a beat for a second just like mine did. Lu Fei really knows what to say when Man Man is upset and can always calm her down. Honestly, if he said those things to me, I’d be over the moon. 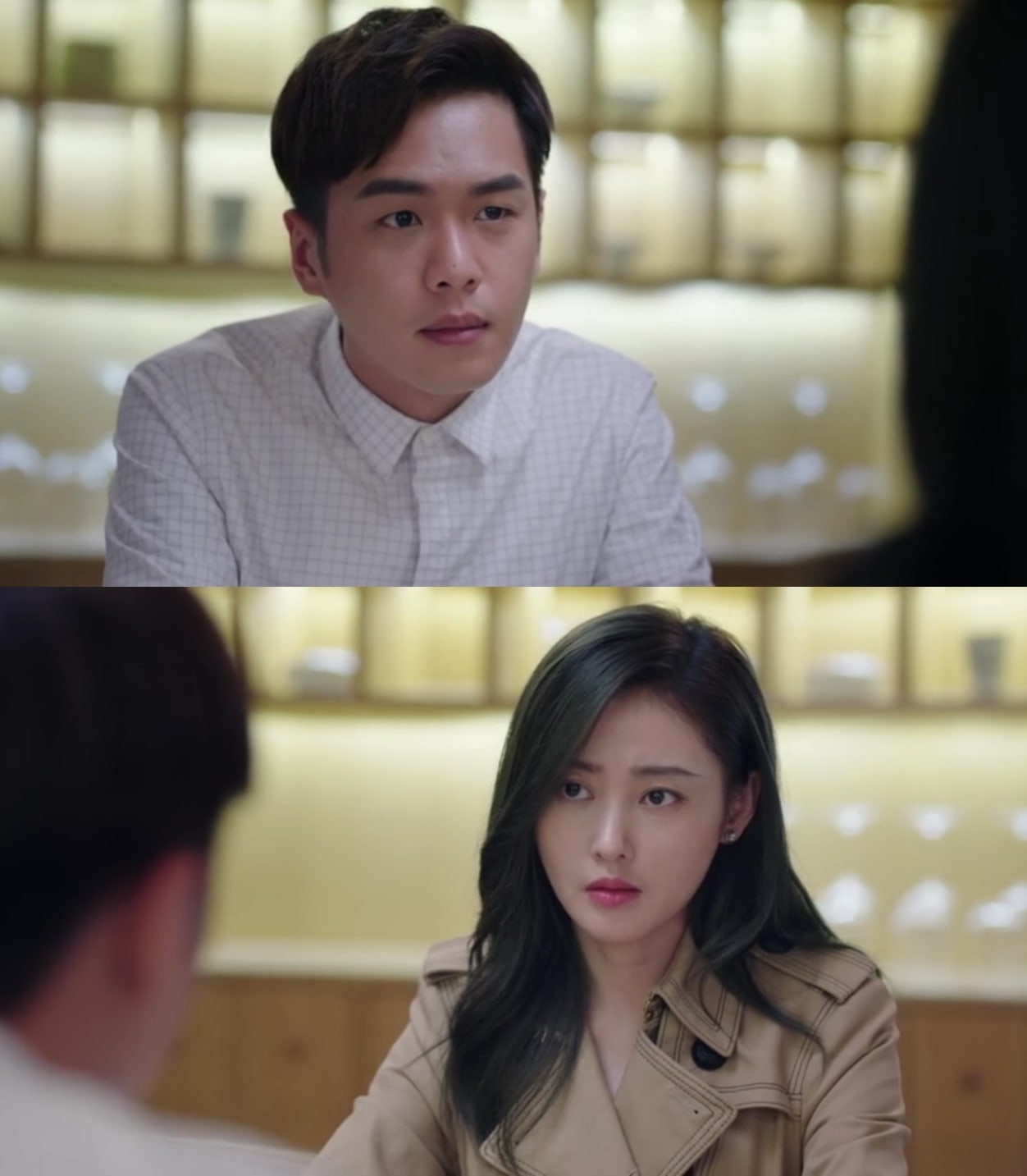 During this scene, Lu Fei and Man Man are dining together when Man Man asks Lu Fei for his opinion regarding her dating Ding Yu Yang. Lu Fei tells her that he’s afraid of losing her and their friendship, but that he’s also afraid that she’ll get hurt. He says, “I want you to give up on him. I have my selfish reasons… I’m not a perfect friend, I have my own hidden heart and I can also be influenced by my likes and dislikes.” This scene really stood out because this is the most honest and direct Lu Fei has ever been throughout the drama. He is basically confessing his love out loud, but it’s too bad Man Man cannot read between the obvious lines because she’s so infatuated with Ding Yu Yang.

“We’ll face everything together” 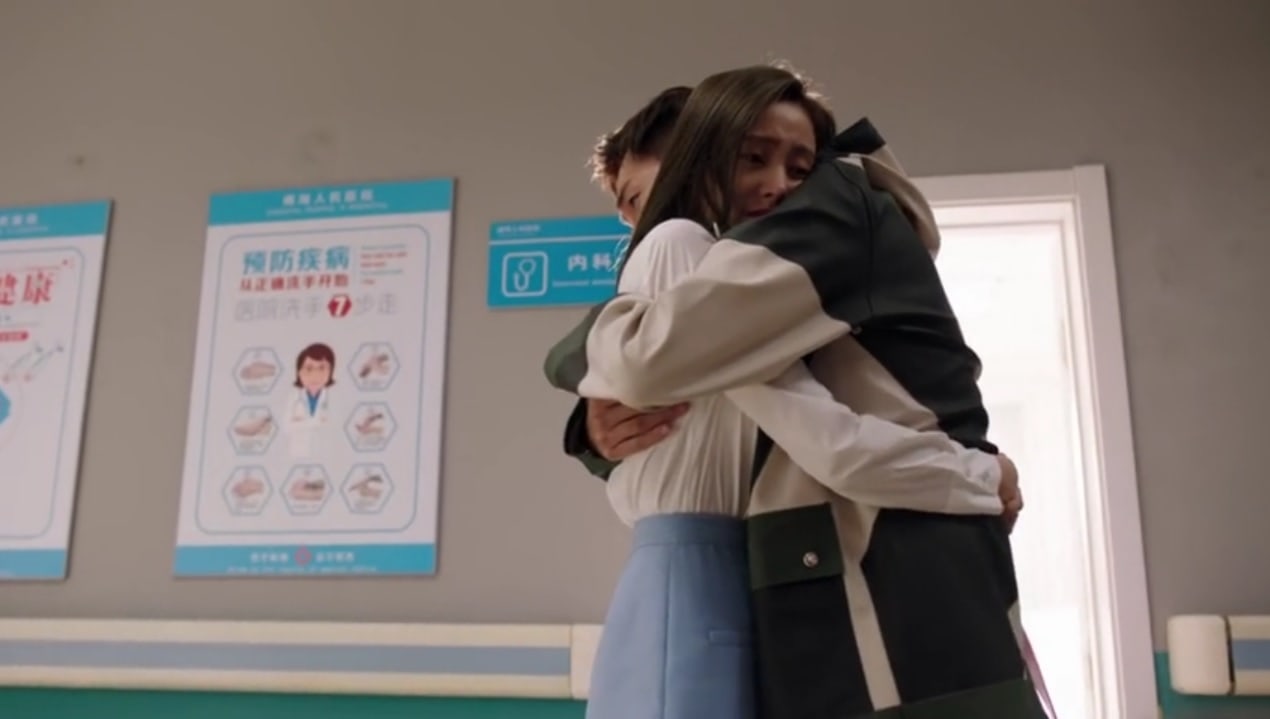 Last but not least, one of the most memorable highlights of this drama happen during a scene at the hospital. Lu Fei’s world completely crumbles before him when he finds out his mother has a brain tumor and that his MIA father accumulated a huge debt from illegal fundraising. When Man Man finds Lu Fei at the hospital, they quickly form a tight embrace. All the memories of Man Man always being there for Lu Fei during difficult times come flooding in. Man Man tells Lu Fei to stay strong and reassures him that everything will be okay, as they will face everything together.

This is such a pivotal moment because Man Man drops everything after she hears the news about Lu Fei’s family and comes to support him. Lu Fei tries to stay strong throughout the ordeal, but as soon as he sees Man Man, he completely breaks down. I loved this scene because it demonstrates how authentically Man Man and Lu Fei love and care for each other. If that isn’t true love, I don’t know what is, because you only show your vulnerable side to the people you love and care about the most.

If you loved the original series, you will enjoy this remake just as much! Compared to the Korean remake, this one follows the essence and heart of “In Time With You” more closely. It also shows the depth of our main characters, exposing their individual struggles of balancing career, family, and love. That being said, it can be draggy at times with some annoying side characters like Qing Qing, the neurotic self-claimed ex. But despite that, the drama’s depiction of romance is on a deeper level, and there are plenty of heartfelt moments that will move you to tears when you least expect it.

Hey Soompiers, are you watching “The Evolution of Our Love?” What are some of your scenes from the drama? Let me know in the comments below.

Currently watching: “Love and π” “Campus Heroes”
Looking forward to: “One and Another Him,” “Unexpected”
All-time favorite dramas: “Nirvana In Fire,” “Queen In Hyun’s Man,” “A Witch’s Romance“

Soompi Spotlight
Zhang Ruo Yun
Zhang Tian Ai
The Evolution of Our Love
How does this article make you feel?