MBC’s upcoming Wednesday-Thursday drama “Terius Behind Me” released new stills of Jung In Sun as a single mother.

“Terius Behind Me” is a spy romantic comedy about single mother Go Ae Rin (Jung In Sun) and her neighbor Kim Bon (So Ji Sub). The two are involved in a mysterious incident, to which former con man Jin Yong Tae (Son Ho Jun) holds the key.

Go Ae Rin is a character who gave up on her dreams and social life to focus on raising her two children. Although she wanted to pursue a wonderful career as a full-fledged programmer after graduating from the Department of Computer Science at an engineering college, her marriage at an early age led her to become a single mother.

The photo shows Jung In Sun’s busy morning life as she holds a ladle in one hand and a spatula in the other. Judging from the flour on her face, a little girl’s pink hairband on her head, and a cranky grimace on her face, it is obvious she’s having a rough morning. The war-like routine, which has made her into a spiteful, stubborn woman, will fill the viewers’ homes with pleasant laughter.

With her innocent looks and stable performance, Jung In Sung is making drastic attempts to transform into her new character. Above all, expectations of her chemistry with her co-star So Ji Sub are high, and viewers are already wondering what will happen in the first episode. 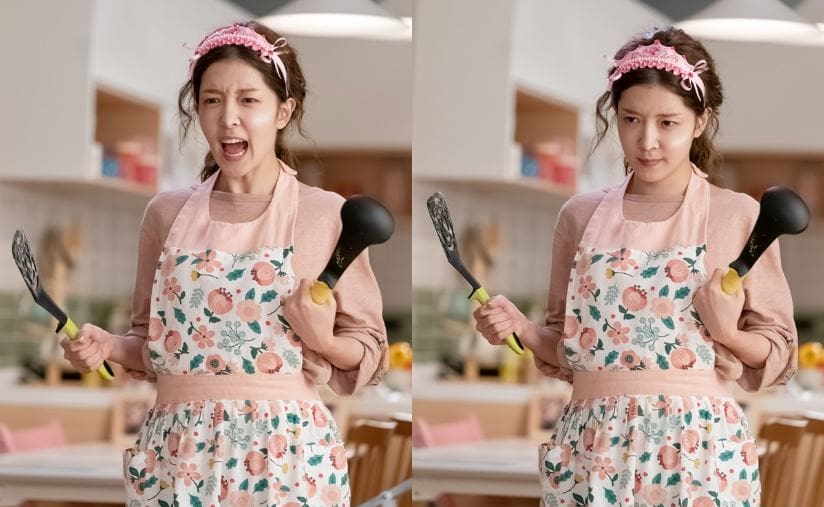 “Terius Behind Me” will be the follow-up to “Time” and will premiere in late September.

Jung In Sun
Terius Behind Me
How does this article make you feel?