Sunmi Reigns Over All Major Realtime Charts With “Siren”

Sunmi has swept major realtime charts with her new song!

On September 4 at 6 p.m. KST, Sunmi released her mini album “Warning,” featuring the title track “Siren.” Sunmi wrote the lyrics for the song, and also co-composed it.

Right after its release, “Siren” hit the top of many major realtime charts, and as of 10:30 p.m. KST, it’s taken No. 1 on every single one. This includes Melon, Genie, Bugs, Mnet, Naver, and Soribada. 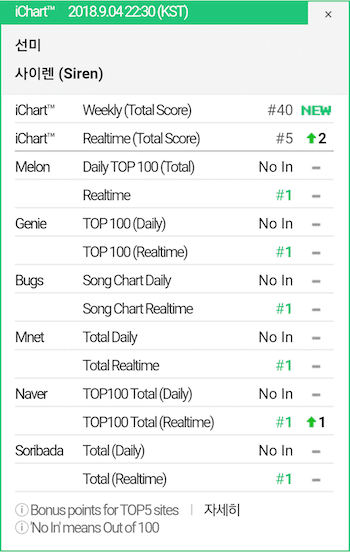 Sunmi shared her thoughts to Newsen after the achievement, through her agency MakeUs Entertainment. “I was very nervous and worried before making my first comeback in eight months,” she said. “Thank you to everyone who’s shown a lot of love, and I’ll try to keep transforming and improving. Thank you.”