VIXX’s N and Kim So Ra are another potential couple in tvN’s “Familiar Wife”!

“Familiar Wife” is about Cha Joo Hyuk (played by Ji Sung), a man unhappy with his marriage who is given the opportunity to change the past. When transported to his past, he chooses to not meet his wife Seo Woo Jin (played by Han Ji Min). However, in the altered present, he continues to become entangled with her, and though she cannot recognize him, she cannot help but find him familiar.

In the last episode, Kim Hwan (played by VIXX’s N) goes through with a love confession method he learned from a webtoon. He tells Hyang Sook (played by Kim So Ra), “I’m going to kiss you in three seconds. If you don’t like it, move out of the way.” Although he’s immediately rejected, viewers found his failure both adorable and amusing. 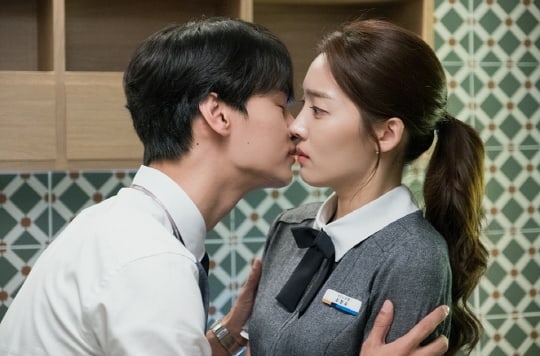 In the still images released by Jellyfish Entertainment, N showcases a completely different image of the Kim Hwan from the previous episode as he stares at Kim So Ra with a sincere look on his face. In another image, he leans forward to barely touch his lips with hers.

N is also receiving attention for switching up his trademark perm for a more relaxed hairstyle. Viewers wonder if a change in emotions will also follow his change in hairstyle.

VIXX
Cha Hak Yeon
Kim So Ra
Familiar Wife
How does this article make you feel?