Lee Ga Eun and Heo Yun Jin, who appeared on Mnet’s “Produce 48” as contestants from Pledis Entertainment, appeared in their first V Live broadcast together since the end of the show to open up about their experience.

The duo had nothing but great things to say about each other as Lee Ga Eun described Heo Yun Jin as, “Watching her practice had me in awe, it was a time for me to realize I still have so far to go and so much to do. She is someone who has amazing passion and determination.” Heo Yun Jin responded with, “I’ve always felt that she was a leader, and I felt that even more seeing her in rehearsals. She felt like someone who could do anything. I thought it was so cool how she could keep smiling brightly no matter how hard things got. She is a big role model to me, both as a senior and as an older sister. I was so happy to be training alongside her.” 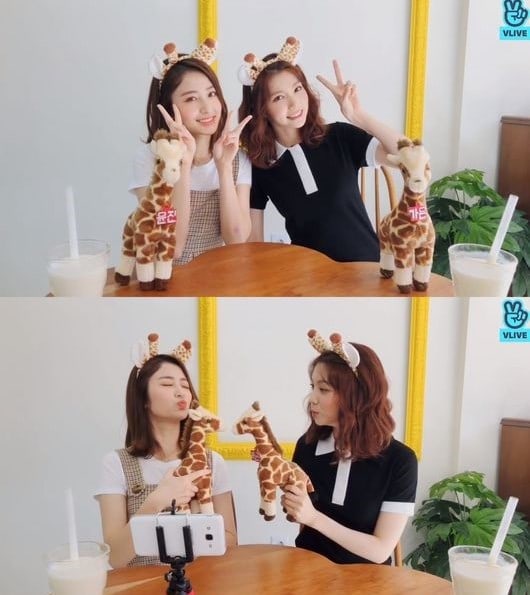 When asked what their most memorable stages were for themselves and for each other, Lee Ga Eun picked the final performance. She said, “Every stage is memorable, but ‘You’re in Love, Aren’t You?’ is the one that sticks with me because I knew it could be my last performance. For the other performances, I’d felt a sense of pressure about doing well and competing with the others, but for the first time on the show, I was able to perform with a happy and grateful heart without worrying about competing. It will be a stage I’ll remember for a long time.” Heo Yun Jin picked both “Side to Side” and “You’re in Love, Aren’t You?” for Lee Ga Eun

Heo Yun Jin replied, “I remember by first performance, ‘High Tension.’ It was really memorable because it was my first time on stage.” Also sharing that she has covered many Girls’ Generation songs, she added, “I really like Girls’ Generation. Since I came to Korea, I’ve been training a lot with their songs. They recently made a comeback as a unit and their new song is so good.” Lee Ga Eun also picked “High Tension” and said, “I was so proud of her. She worked hard for that stage and I trusted her to do well but she went above and beyond my expectations. I was so surprised and delighted that I clapped really sincerely for her.” 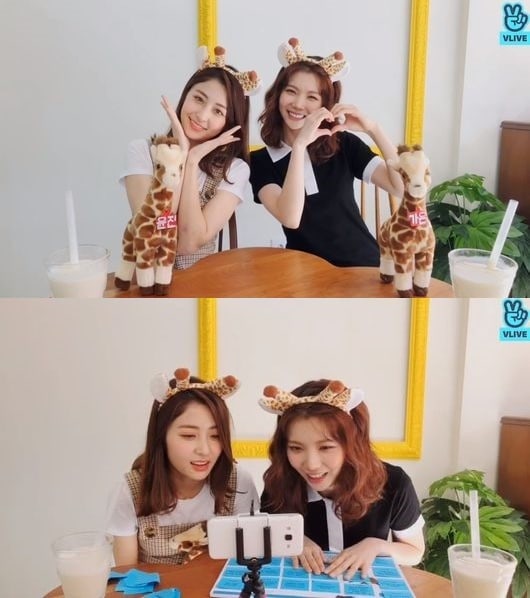 Lee Ga Eun and Heo Yun Jin also shared the story behind their nickname kirins (giraffes). Heo Yun Jin said, “When I was first getting started, I was practicing Girls’ Generation’s ‘Into the New World’ and I was such a bad dancer. Our instructor told me I was like a newborn giraffe. Lee Ga Eun added, “I was dancing next to her and I thought they were referring to me so I turned around, and that’s how I also became a giraffe. What would have happened if Yun Jin had been a good dancer from the start, right?”

The duo wrapped up their V Live broadcast by promising to return again and expressed their gratitude to have the opportunity to connect with fans.