The cast of tvN’s “100 Days My Prince” expressed excitement about their drama.

“100 Days My Prince” is a romantic historical drama about crown prince Lee Yool (played by EXO’s D.O.) who suffers from amnesia and becomes a useless guy named Won Deuk. He wanders around the countryside and ends up in an unconventional relationship with the oldest unmarried woman in Joseon named Hong Shim (Nam Ji Hyun).

On September 10, D.O., Nam Ji Hyun, Kim Seon Ho, and Han So Hee held a V Live broadcast to share their thoughts on one another and their drama.

D.O. began, “It’s my first drama as a lead and I’m so nervous. I’m excited and nervous because it’s the first episode. I’m planning to watch it with expectations. I’m so nervous and I feel a lot of emotions together at the same time.”

Nam Ji Hyun said, “We also have not seen the drama yet, so I’m curious as well. We worked hard to film it with the staff in the summer, so I’m curious as to how it turned out.” Han So Hee added, “It feels bittersweet that filming ended and I’m also looking forward to it. I think everyone probably feels this way.”

“100 Days My Prince” is D.O., Kim Seon Ho, and Han So Hee’s first appearance in a historical drama. D.O. said, “I always thought that I wanted to attempt historical dramas. It was uncomfortable and awkward to act with a topknot and hanbok because I hadn’t worn them before while acting, but it was new and I slowly became accustomed to them. It was really fun.”

Kim Seon Ho commented, “It was my first time appearing in a historical drama, so the hanbok felt really hot. It was hot while wearing a hanbok because it’s thick. I also put my hair in a topknot and it was itchy, so I scratched it with a chopstick. Despite this, we were able to have fun while filming because we relied on each other and talked.”

Agreeing to her co-stars’ comments about how uncomfortable it was to film while wearing a hanbok in the summer, Han So Hee surprised everyone by adding, “I saw a snake on set.”

The actors continued the broadcast with the “Dice Talk” segment, where they initially answered questions with a designated number of words. D.O. said, “The script itself was really fun. The characters were full of charms and the storyline moved quickly, so it was fun because it wasn’t boring.” Han So Hee added, “I definitely felt the appeal of a historical drama.” 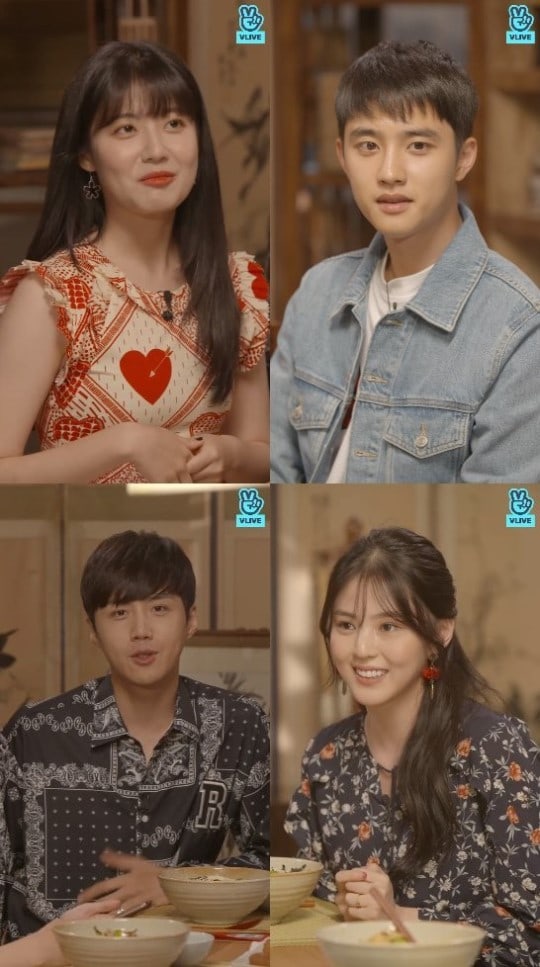 The cast then introduced each of their characters. Kim Seon Ho described Jung Jae Yoon as “innocent.” Speaking about Hong Shim’s confident personality, Nam Ji Hyun explained, “She has a personality where she doesn’t surrender at a time of crisis.”

Choosing the word “cold” to describe her character, Han So Hee added, “She’s a character that has power, so she needs to have the skills to see through the people under her. She’s a character who’s cold and true to reason rather than emotions.”

While discussing personality traits they want from each of their characters, the actors brought up the topic of fear. Kim Seon Ho said, “I have a lot of fear in my everyday life. I’m a coward. My character doesn’t have fear, so I want to learn that from him.”

D.O. stated, “I’m not the type of person who has a lot of fear. We are similar in many ways, so I don’t think there’s really anything I want to learn from my character.”

On the topic of marriage, D.O. said, “I like work and it’s something so far into the future, so I haven’t thought about it at all.” He then made his co-stars laugh by saying, “I get scolded a lot at the beginning of the drama. If this is what married life is like, I’m not so sure [about marriage].” He added, “It would be good if she embraced and taught me what to do, but starting from the beginning, I was scolded at, hearing things such as ‘What are you doing? What have you done?'”

About her first impression of D.O., Nam Ji Hyun said, “When I first saw him, I thought, ‘His eyes are really big.’ That was my first thought. To be honest, I watched a few of his past works. I was really curious about his acting and some things were similar to my expectations and some things were different, so it was fun.”

In the end, all of the actors agreed that they’ll dance together if they surpass 10 percent in viewership ratings.

“100 Days My Prince” premiered on September 10 and will air new episodes on Mondays and Tuesdays at 9:30 p.m. KST.